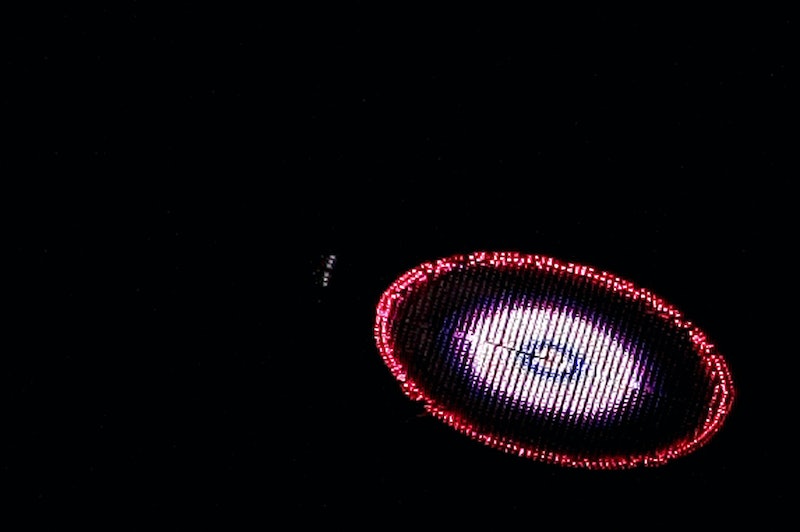 Well, guys, Doomsday finally came. There was a possible UFO sighting in San Diego a few days ago, and by "possible," I mean that I'm already asking Siri to translate "I surrender" into Universal Alien Speak. I mean, just take one look at the intricate formation of lights that popped up at random in the sky, and you'll be all for waving the white flag with me. They have a giant mothership with bleeping lights! We're doomed.

Or maybe not. There's a possibility that they could be entirely friend aliens, and just want to borrow the nearest landline to get back their home planet à la E.T. Or, you know, they could be hell-spawn ripped out of a multi-dimensional war zone coming to gut us all in our sleep and pillage our world for its resources. IDK, guys. IDK. Unfortunately, my only real experience with aliens comes from the cinematic ~gem~ that is Jupiter Ascending and a bunch of apocalyptic YA novels, so I'm probably not the best person to try to make peace with these life forms anyway.

An NBC photographer and local resident Larry Fox were two people who managed to get the incident on tape, showing what appears to be a string of lights flashing red, green, and blue above the Coronado Bridge. "I ruled out a drone or a plane because the light was stationary. It was a series of flashing lights. If it was a plane, it would have moved," said Fox in a statement to NBC News. After seeing my inevitable fiery death reflected in the sky, I'm kind of inclined to agree with him.

Here are two videos of the alleged alien encounter:

Spooky stuff, right? Anyway, there's plenty of room in my underground bunker as long as your name is Ryan Gosling and you brought a pack of Oreos, so we can all hide down there for a bit while we figure out our next move.

In the meantime, HEY ALIENS!! LISTEN UP!!! I HAVE STUFF TO SAY TO YOU!

Sorry for all the caps lock, new visitors, I just needed to get your attention and yelling at people who don't know our language is the American Way. Anyway, now that you're listening, I've got some things to tell you about the human race before you park your stadium-sized death ship on our home planet. Think of me as your Earthly Tour Guide Barbie. Here's some stuff you should know about earth before your extended stay as our possible new overlords:

1. We haven't been here very long (so technically it's not our fault)

And by "it" I mean global warming, the depletion of our natural resources, and mass pollution around the globe. I mean, come on! We've only been here for like 200,000 years! We're basically fetuses on the cosmological scale, so cut us some slack, OK?

2. We are very obsessed with butts

Is there a random body part that you're obsessed with, aliens? If not, feel free to partake in our various booty anthems and our ritualistic viewing of Kim Kardashian's naked ass. We want you to feel at home here while you're conquering our cities, after all.

3. We are also very obsessed with cats

Don't even ask me to explain. Cats are like people, except more terrible and less classy, and also they don't have opposable thumbs. They'll probably welcome you with open paws when you burn down our homes and eradicate our species, because let's be real, they've been waiting for this moment hella longer than you have.

#AlienApocalypse, #Doomsday, #AnExtraTerrestrialJustRippedMyFriendsHeadOff, etc. Your first trending hashtag!! How exciting! (Don't worry, you'll figure out how hashtags work soon. I had trouble too!!)

5. We'd really appreciate it if you'd stop shooting your lasers long enough for us to pick an Instagram filter

BELIEVE me, Masters, this is in your best interests! We want to perfectly capture your sickly greenish glowing hue to the best of our technological capabilities before you wipe them and us off the face of the time-space continuum. You'll thank us later ;) ;) ;).

More like this
Meet The Disney Imagineer Bringing 'Guardians Of The Galaxy' To Epcot
By Charlie Mock
30 Expensive Mistakes You Don't Realize You're Making With Your Car
By Claire Epting
Here's Your Daily Horoscope For May 18, 2022
By Mecca Woods
Are Gemini & Scorpio Compatible In A Relationship?
By Kristine Fellizar
Get Even More From Bustle — Sign Up For The Newsletter