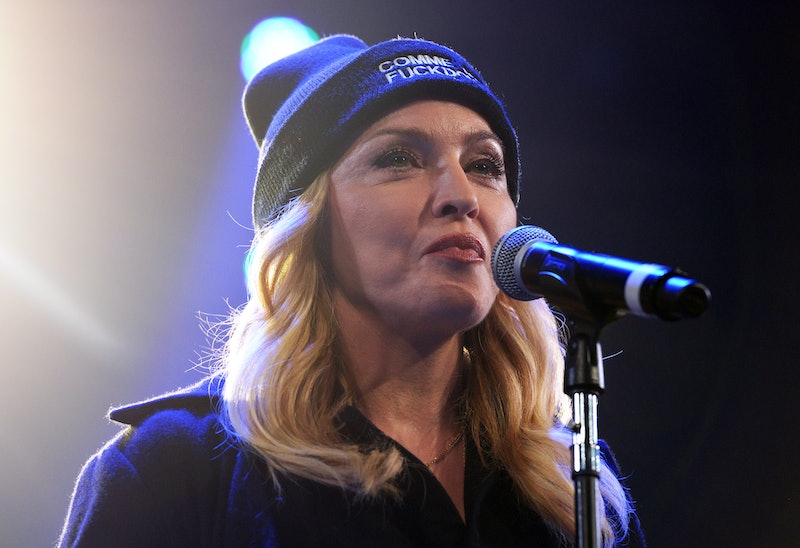 I've seen my fair share of epic moments in show biz, like that time Janet Jackson's exposed nipple essentially changed the course of television censoring and that one fateful night I witnessed Tupac's hologram saunter on stage with my own two eyes at Coachella. But one of the most recent shocking on-stage moves was the kiss between Drake and Madonna during his recent Coachella set. The lengthy kiss between the two performers got a lot of people talking and many criticized Madonna because of Drake's post-kiss grimaces on stage. He quickly defended the kiss in a positive way, but now, Madonna has spoken about the Drake kiss after being asked about it in a Q&A with fans. And her words got me wondering: was she making a friendly joke or was Madonna throwing shade?

On Saturday night, Madonna appeared on Saturday Night Online for an interactive Q&A with fans, and she was faced with a question about her kiss with Drake. In the most Madonna way possible, she took a sip of wine and said, "I kissed a girl and I liked it." Oop! And it didn't stop there. Later on, when asked about giving advice to her younger self, she quickly responded, "Don’t kiss Drake no matter how many times he begs you to."

I have to admit, I was a little confused at her comments toward Drake, because I totally thought the two were fine. After the news of their make out starting spreading in the media, most people focused on how Drake seemed to react afterward, but he made it known that he was honored to lock lips with the Queen on Instagram:

So, all was well right? After all, he was performing his song "Madonna" from his latest mixtape when she came out on stage. The song is obviously a positive nod to her, and this is backed up by the fact that Drake started posting photos of Madonna on his Instagram in February with suggestive captions, which now are known to be lyrics to the song. Also back in February, Madonna shared that she was making plans for her next album, and said she wanted to collaborate with Drake, "if he'll have me."

The admiration didn't stop there. In March of this year, following the release of Rebel Heart, Madonna expressed there are still artists she wants to work with and told the Associated Press, "I don't know, maybe I'll collaborate with Drake." Basically, it sounded like they were big fans of each other. So, did the negative press after the Coachella kiss stir up some bad blood between them? Considering the unfair comments and ageism Madonna has had to endure in the media lately, I can understand that she feels the need to stand up for herself. But she is also always very cheeky in her responses, so this could just be a jokey little dig at Drake.

Whatever the case, it's obvious that collaborations between the two have the potential to be legendary, and being how savvy they are, I don't think we have to worry about their working relationship at all.