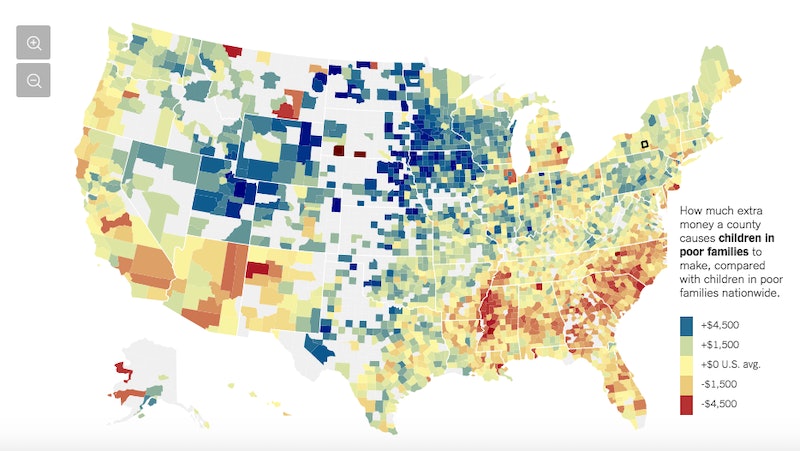 Being able to define things by certain metrics is comforting, and it makes decision-making — the worst thing in the world — decidedly easier. That's why those girls who used color-coded gel pens and binder tabs in middle school are on top of the world now: they got organized and figured out how to prioritize. And although deciding what's important isn't always easy, many Americans find that they have one priority in common: their finances. So, to help you pick the best place to raise your future family, The New York Times has created a map of the best and worst places to grow up.

How did the Times choose which places were good environments to raise children and which were not? Easy — it ranked each county according to how much money children who grew up there were likely to make as young adults.

The Times created an interactive map feature, meaning unless you live in one of the counties out West or in Alaska where there is not enough data to draw conclusions, you can select any county you like and view detailed descriptions of how much money the kids who grow up there are likely to make. The most obvious application of this fascinating-yet-unsettling interactive map is looking at your own chances.

For example, since I grew up in Essex County, New Jersey, I am of course interested in seeing how much money kids from Essex County are likely to make in the future. Since I lean towards the liberal arts, I have always been told that my income is probably going to be smaller than any engineering student — but it turns out that where you were raised matters.

Here's what the map has to say about Essex County:

Essex County is very bad for income mobility for children in poor families. It is better than only about 11 percent of counties.

But that's not all there is. As you might expect, girls who grow up in poor families make less money than poor boys from the same area, at least in my county. And the effects of living in my county are only negative for low- and average-income families. Once you cross the threshold into the "rich kids" category, which is actually what the Times calls it, you benefit from living in Essex County.

Another way to look at this data is to check the statistics for cities that are in the news right now. You don't have to look far to find some very relevant information about Baltimore — according to the Times:

Among the nation’s 100 largest counties, the one where children face the worst odds of escaping poverty is the city of Baltimore, the study found.

Freddie Gray's childhood neighborhood, Sandtown, has a poverty rate over 30 percent. Unfortunately, this is indicative of a trend in large urban areas — kids who spend their childhoods in many big cities in the U.S. are more likely to be in poverty. Which cities have the worst odds? According to the data:

That is not to say that all large cities lead to inevitable poverty in adulthood for kids who grow up there. In some cities, climbing the ranks of social and economic mobility is much more feasible. The best contenders are a mix:

You may notice that the colors on the map are definitely concentrated in certain areas. The dark blue counties are mostly in the Midwest, while red and orange counties are clustered around the Southeast. For the most part, both coasts are a pale yellow, meaning kids who grow up there will live a financially average life. This might be because there are just more kids there due to higher population density, so whatever life those children lead determines what is average.

But it is worth noting that growing up in the Midwest gives a child the best chance of making more money, and growing up in North Carolina or Mississippi makes a child more vulnerable to lifelong poverty.

But the city of your birth, or even the city where you lived for your last years at home, does not determine your potential future financial stability. The most important factor is when you moved to an upwardly mobile county. For example, a poor child who lives in Essex County and moves to Bergen County at age 12 will experience a much more lucrative future than a kid who moves at age 18. And a kid who moves from a "bad" county to a "good" county at age nine has an even brighter future.

These rankings are based purely on statistics. They don't take into account the importance of things like local culture, beautiful natural surroundings, or family connections. Of course these aspects of life also contribute to a child's life and development, but it would be facetious to suggest that a poor child with very low prospects of getting out of poverty should be happy with his situation because there is great street art where he lives. Money isn't everything, but it is important — and where you grow up can make all the difference.

More like this
10 Times Diana & Meghan Spoke Similarly On The Royal Family
By Sophie McEvoy
30 Expensive Mistakes You Don't Realize You're Making With Your Car
By Claire Epting
5 Crystals To Manifest More Money
By Megan McCarty
What Is Jeanie Buss' Net Worth? The Lakers President Is Uber Rich
By Hugh McIntyre
Get Even More From Bustle — Sign Up For The Newsletter