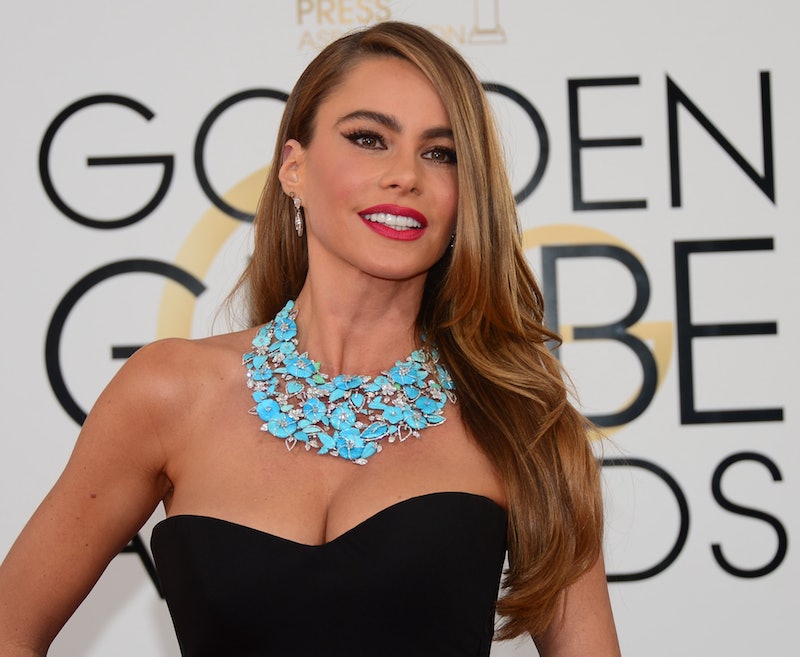 Last Wednesday, Modern Family star Sofia Vergara's life was put under the microscope when her ex-fiancé Nick Loeb wrote an op-ed piece for The New York Times . The editorial contained details about Vergara and Loeb's decision to freeze embryos in hopes of using a surrogate to have a baby one day. Well, that dream fell through once Vergara and Loeb split — she is now engaged to Joe Manganiello — and now there's a legal battle between the two. The actress previously had only commented via her lawyer, but now, Vergara is speaking out about the frozen embryo lawsuit.

On Monday, the actress appeared on The Howard Stern Show, where she chatted openly with Stern about Loeb and the frozen embryos. For those who don't know, Loeb filed a lawsuit claiming Vergara wanted to destroy the two embryos. As part of his op-ed piece, he also explained that despite a contract signed by himself and Vergara stating that "any embryos created through the process could be brought to term only with both parties’ consent," he still wants them carried to full term at which point he would raise the babies on his own.

So what does Vergara think about all of this? She told Stern,

I totally understand him, but the thing is this. Fortunately, and unfortunately, there is law. You signed legal papers and if it was so serious for him, this issue, which I totally respect if it’s serious for someone, then you should’ve taken it more serious at the time like I did. There is a contract. He can’t do anything… We did it two times.

The two times Vergara references refer to the times she and Loeb tried to bring two embryos to term, but failed. They then created two more frozen embryos, but did not follow through with surrogacy. Vergara also told Stern she believes a baby needs “more than a mother, [a baby] needs a loving relationship of parents that get along, that don’t hate each other.” She said it wouldn't be fair to bring children into the world around two people that don't see eye to eye. "It would be so selfish," Vergara declared. She also clarified that she doesn't hate Loeb, but she feels that he's not too fond of her.

Even though Vergara did not read the op-ed piece, she has no fears whatsoever about Loeb being able to get the contract voided. She also said that her ex should have thought about all of this before he signed the papers, because now there's nothing he can do to break it. Plus, the actress is not upset with the situation, because she is "doing the right thing and [she] didn't do anything wrong."

With that said, she and Manganiello try not to discuss it, especially since they're having "fun," moving into their new house, and are busy planning their wedding.

More like this
Sandra Bullock, Girlboss Extraordinaire
By Matt Harkins & Viviana Olen
Spice Girls’ Net Worth: The Richest Member Is Wealthier Than The Rest Combined
By Hugh McIntyre
The Millie Bobby Brown & Jake Bongiovi Guide To Cute PDA & Red Carpet Twinning
By Bustle UK
Joe Alwyn Reacts To Taylor Swift Earning An NYU Doctorate In A Rare Interview
By Jake Viswanath and Nicole Pomarico
Get Even More From Bustle — Sign Up For The Newsletter