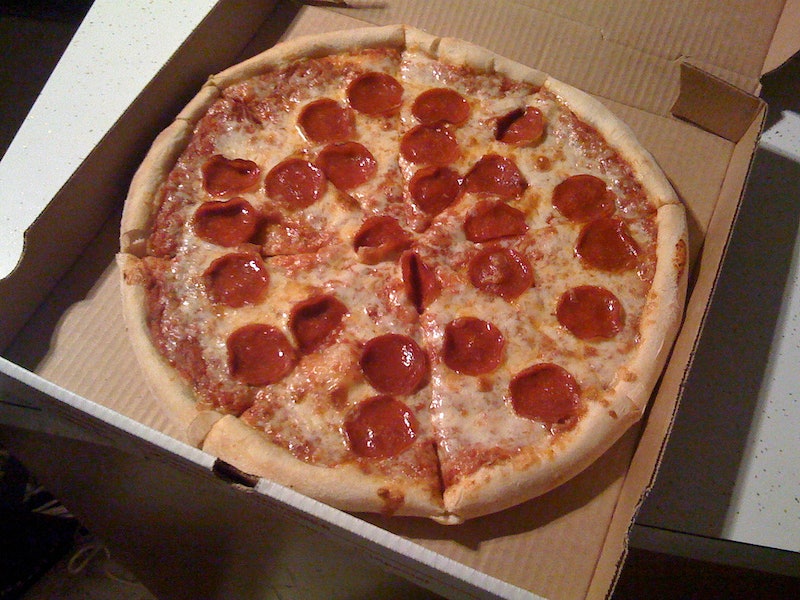 Bad news for pizza lovers — and coat wearers, and rug owners, and a whole bunch of other folks out there: Pizza boxes may be hurting your health. To be fair, it's not the boxes themselves; it's the chemicals in which they're coated in order to help them stand up to all that grease. The chemicals, called short-chain poly- and perfluroalkyl substances (PFASs for short), are found in a huge variety of products, ranging from the aforementioned pizza boxes, coats, and rugs, to shoes, sleeping bags, electronics, and more. According to a statement recently signed by a whooooole bunch of international health and environmental experts, however, these chemicals have a tendency to stick around — and their effects once they get into your body could potentially be very bad, indeed: They're associated with increased risk of cancer, obesity, liver malfunction, hyperthyroidism, and more. Uh... yikes.

The statement, officially titled the Madrid Statement, was released on Friday, May 1. It notes that although long-chain PFASs have been phased out or banned since it was determined that they correlate with a whole bunch of nasty health issues, the replacement chemicals — short-chain PFASs — might not be that much better. Reads the statement, “While some shorter-chain fluorinated alternatives seem to be less bioaccumlative, they are still as environmentally persistent as long-chain substances or have persistent degradation products. Thus, a switch to short-chain and other fluorinated alternatives may not reduce the amounts of PFASs in the environment.” Furthermore, it continues, “While many fluorinated alternatives are being marketed, little information is publicly available on their chemical structures, properties, uses, and toxicological profiles.” The fear is that increased use of these alternatives might result in more of them sticking around in the environment, as well as in our bodies, and wreaking havoc on both of them.

Linda S. Birnbaum of the Department of Health and Human noted, “Research is needed to find a safe alternative for all current uses of PFASs” — and, indeed, the statement specifies an approach that would involve scientists, governments, chemical manufacturers, product manufacturers, and consumers all working together together to solve the problem. The idea is for the currently used short-chain PFASs to be replaced by another, safer alternative, for products that contain PFASs to be labeled as such, and for consumers to avoid PFASs as much as possible. But, Birnbaum asked, “The question is, should these chemicals continue to be used in consumer products in the meantime, given their persistence in the environment?”

Not everyone is in agreement with the statement's conclusions, however. According to Medical Daily, the American Chemistry Council said in response that the scientists “ignored the fact that such chemicals use 'essential technology for many aspects of modern life,' and that tests, reviewed by the Environmental Protection Agency, concluded that these alternatives were safer than the chemicals they were replacing.” Added Thomas H. Samples, who heads up risk management for the division of DuPont that makes the PFASs in question, “We don't dismiss the right of folks to debate this. But we just believe based on the 10-year history of extensive studies done on the alternatives, that the regulatory agencies have done their job of determining that these things are safe for their intended uses.”

I would argue that 10 years isn't actually a heck of a lot of time; there might longer-term effects of short-chain PFASs we haven't seen yet that further research might uncover. Furthermore, safer doesn't necessarily mean that there's still no risk involved. Either way, though, I think the juncture we're at is this: We need more research to determine whether or not the danger is actually there, or whether we're being overly cautious.

As Cosmo points out, it might be a little difficult to avoid PFASs altogether right now — they're found in so many things that we probably don't even know how far-reaching they are. But hey, at least you've got a choice when it comes to your cookware; just avoid the non-stick variety and prepare to use a lot of olive oil. And why not start making your own pizza instead of ordering out while you're at it?