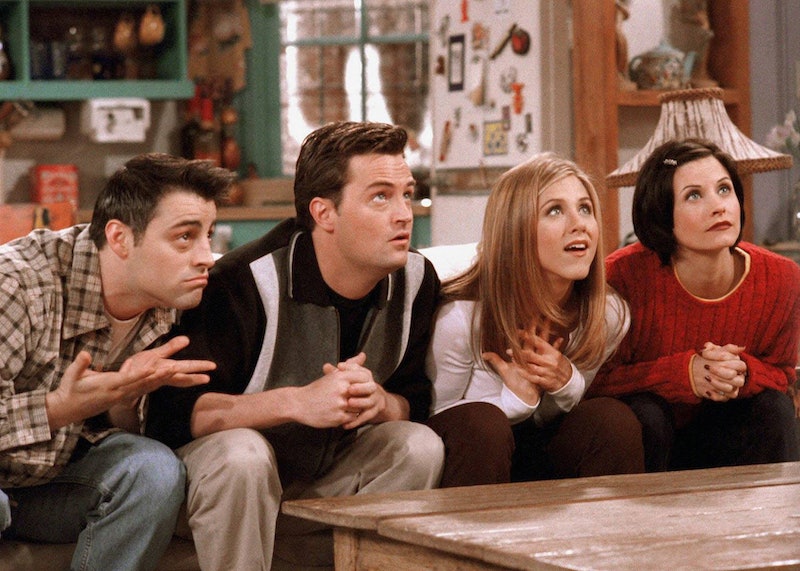 At the end of April, we (and Justin Timberlake memes throughout the internet) were talking about how it's gonna be May. Yesterday, Star Wars fans had adopted the mantra May The Fourth Be With You, but today people around the globe will be celebrating Cinco de Mayo. As an avid fan of holiday celebrations and fishbowl-sized margaritas (mango is my favorite flavor — what's yours?!), I am anxiously awaiting today's celebrations with friends. Speaking of friends, have you ever wondered how the ensemble of our favorite '90s sitcom, Friends, would celebrate Cinco de Mayo? We've seen the gang celebrate many a Thanksgiving and other holidays, but I don't recall seeing the sextet ever partake in any shenanigans centered on the fifth of May. That's a real shame, too, because given the gang's history of making every and all situations hilarious, I can only imagine what their tequila-infused escapades would look like.

The episode could probably be given a title like, "The One Where Joey Steals All The Guacamole," or "The One With Ross's Sombrero," or something a lot better than those two titles I just made up. Let's take a look at some possible scenarios for our Friends celebrating Cinco de Mayo:

Rachel Would Mess Up The Margaritas

We all remember that time where Rachel's attempt at making a traditional English trifle went awry and hilarity ensued. Maybe Rachel would attempt to make margarita mix from scratch and accidentally make salt the primary ingredient, rather than a garnish for the rim. Everyone would pretend to love Rachel's margaritas, while secretly attempting to dispose of them in the bathroom, Central Perk coffee cups, or Phoebe's guitar.

Ross & Rachel Would Get Married By Accident...Again

Speaking of margaritas, we all know what happens when our favorite on-again, off-again couple have a few too many.

Ross Would Have A Terrible Costume

Unfamiliar with celebrating Cinco de Mayo, Ross would don a ridiculous costume and the rest of the gang would try to stealth their way out of being seen with him in public.

Chandler & Joey Would Be Completely Unprepared

After falling victim to procrastination, Joey and Chandler would have to come up with last-minute drinks and eats to bring to the party. Their contributions would include:

Much like the time Chandler and Rachel couldn't stop eating cheesecake, the duo would be unable to resist feasting rituals with guacamole even after Cinco de Mayo has passed. Inevitably the last of the guacamole would drop to the floor of the hallway, and we would later see Rachel announcing "oh, hey, there's no floor on this part!" as she and Chandler fight over the remnants.

Phoebe Would Attempt To Sing At A Parade

What does "Smelly Cat" have to do with Cinco de Mayo? Absolutely nothing, but it has everything to do with must-see television.

Monica Would Steal A Sombrero

With spring and summer comes humidity, and we all remember how Monica's hair reacts to the heat (I know that feel, girl). Monica would attempt to steal a sombrero to cover her ever-growing curls, and hilarity would ensue.