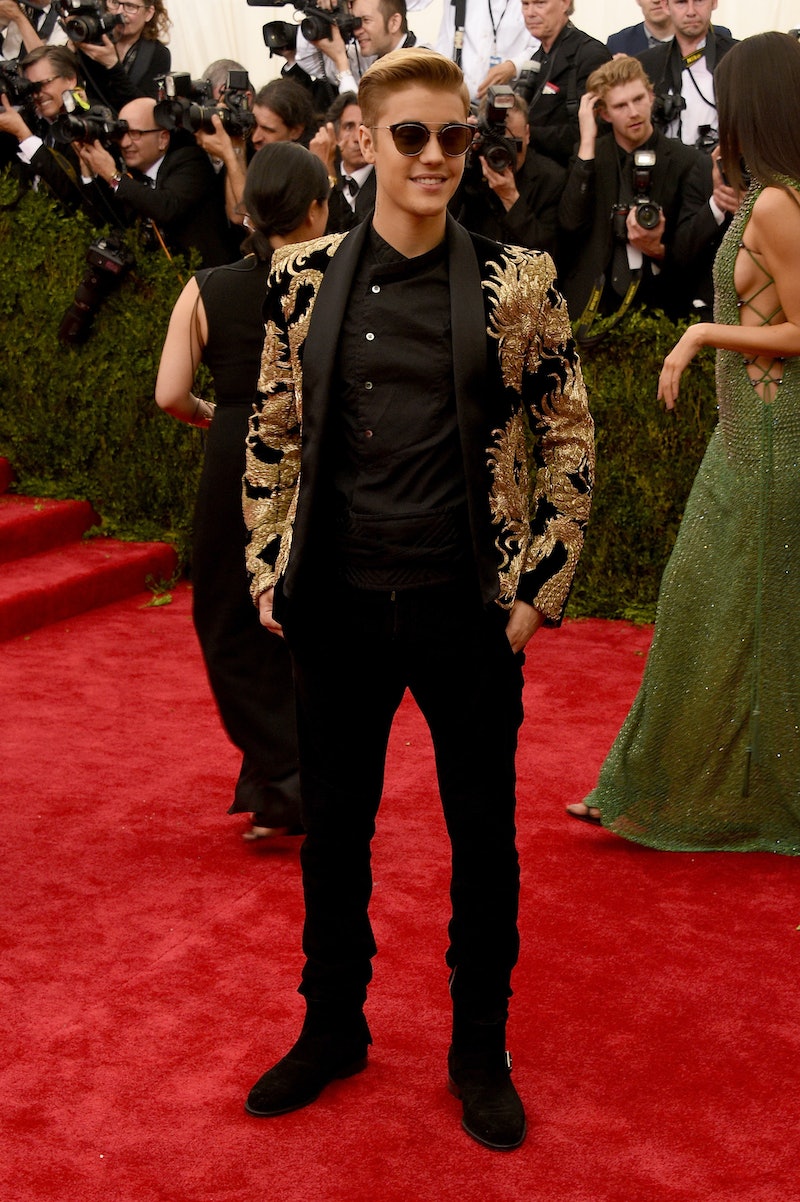 If there's ever been a man (read: boy) in the land of fame to make my douchey radar go berserk it's undoubtedly The Biebz. So, as you can imagine, I couldn't help but wonder what Justin Bieber at the 2015 Met Gala would look like. Perhaps more than any year, this year's Metropolitan Museum of Art’s Costume Institute Gala has run the risk of seeming culturally appropriative. Its theme, "China: Through The Looking Glass," hinting at the appropriation of Chinese culture. As Bustle's Maxine Builder noted upon reading the gala's press release:

"Unfortunately, most of the language in the press release added to my overall concern. Like when Andrew Bolton, curator of the Costume Institute, says that the Chinese influence in fashion imbues a level of 'romance, nostalgia, and make­ believe.' Or when the MET’s CEO Thomas P. Campbell frames the exhibit as revealing 'provocative new insights into the West’s fascination with China,' rather than giving Chinese designers an opportunity to promote their own fashion and culture."

Considering Bieber hasn't always been the most, erm, sensitive or accepting of souls (need I remind you of 2013's "beached whale" incident), I had my doubts that he'd be able to show adequate respect and consideration for Chinese fashion without culturally appropriating the sartorial wonders of Chinese history. But, more than anything else, his choice in dress has left me confused.

Like most dudes on red carpets, Bieber is sporting a traditional black-on-black pants and button-down combo. But he's also wearing what looks like a dragon applique jacket. Of course, there's no way of gauging whether or not Bieber knows the significance of the dragon in Chinese culture, mythology, and folklore. But if he does know that the dragon is a symbol of strength and imperial power, I can't help but wonder if he's trying to be metaphorical. Is Bieber comparing himself to a dragon? Does he feel he's a mighty force to be reckoned with? Or does he just like dragons? We will probably never know.

More like this
Emily Ratajkowski Just Wore A Totally See-Through Dress
By Dominique Norman
14 Spicy Bralette Outfits For Vaxed Girl Summer, Round 2
By Avery Matera
'The Circle' Season 4 Star Yu Ling Wu Is Already A Beauty Icon
By Erin Stovall
10 Nail Trends That Perfectly Capture The Early 2000s
By Paris Giles
Get Even More From Bustle — Sign Up For The Newsletter