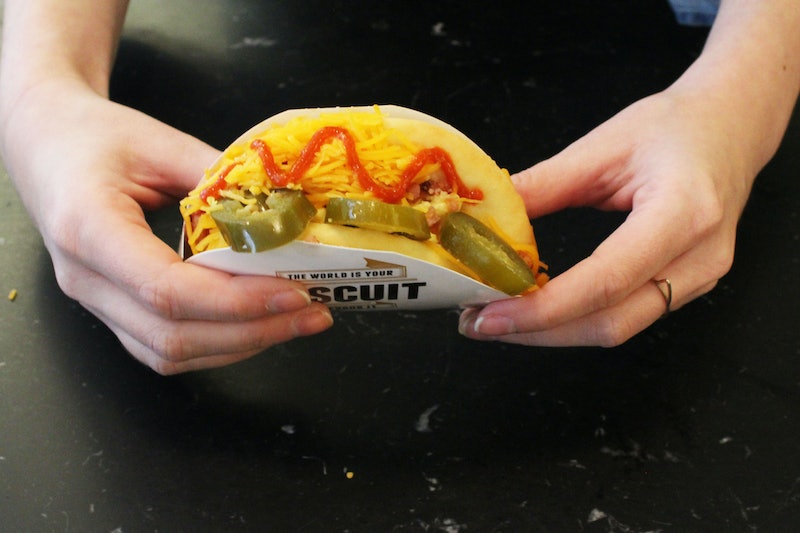 As if Cinco de Mayo wasn't already the most glorious holiday marked on your May calendar, Taco Bell is giving away free biscuit tacos to celebrate this heralded occasion. (Well, it's giving them away for what it's calling Breakfast Defector Day, part of its latest kinda creepy dystopian campaign that, I have to admit, I don't totally understand.) The rules are simple enough: head to your nearest Taco Bell between the hours of 7 a.m. and 11 a.m. on May 5, and get one free sausage or bacon biscuit taco of your choosing (while supplies last) to help you kick off a day notorious for its St. Patrick's Day-esque levels of drunken debauchery in the most delicious way possible. Guys? You can't lose.

As someone who takes both breakfast and tacos pretty seriously, Taco Bell's latest foray into morning eats immediately grabbed my attention. Intrigued as I was by the concept of a biscuit taco — literally a dense, buttery biscuit wrapped around scrambled eggs and either a sausage patty or a smattering of bacon, and then topped off with a healthy sprinkling of cheese — I also wasn't totally convinced Taco Bell was reaching its full flavor potential with this latest creation. I mean, where's the hot sauce? Where's the guac? I've had spicy Sriracha quesaritos before. I live for cheesy fiesta potatoes and XXL burritos oozing with avocado ranch dressing. Biscuit tacos seem like they could be delicious (and I mean, today they're free, which instantly makes them 100 percent more appetizing), but they also just seem... well, a little sad compared to some of Taco Bell's other menu masterpieces. Which is why, when I found myself in possession of a box of Taco Bell's latest breakfast item, I decided I had to play a little game of taco dress-up. Armed with a few tried-and-true ingredients (a bottle of Tabasco sauce, one super ripe avocado, and a jar of jalapenos), I gave the biscuit taco a few different makeovers to see which look really made this breakfast hybrid sing. After all, you only get one free biscuit taco per customer — you might as well make the most of it.

On its own, biting into a biscuit taco is a lot like biting into, well, a biscuit. Flaky and delicious though that biscuit may be, the egg, meat, and cheese seem to get a little lost hiding underneath all that bread. They needed something to help them really shine‚ something to coax them out of their literal biscuit shell. So I gathered my ingredients, and started to let the creative juices flow.

It's a universally known fact that avocado makes EVERYTHING better — everything, including a previously not terrible, yet not very interesting piece of meat wrapped in a biscuit. Cutting up half an avocado was really all I needed to do to instantly play up the texture of the dare-I-say bland taco and give it the flavor factor it desperately needed. Oh, and seeing a little green peeking out through all that meat and cheese just kind of made my soul happy — and when your soul is happy, you know you are engaging in a worthwhile dining experience. On an improvement scale of one to 10, this tiny hack was easily a seven.

3. Biscuit Taco With Sriracha And Jalapeno

Sriracha AND jalapeno? No, no — I don't have a death wish. But I figured an early morning spicy punch to the face would be just as effective (if not more effective) than my morning cup of coffee — and I was kind of right, except one bite of this, and you instantly just taste hot sauce and basically nothing else... for hours. Which, I guess, is fine, if setting your tastebuds on fire is what you're into.

Where would we even be in this world without Tabasco? This hot sauce has the power to move mountains... or at the very least, trick you into thinking that your measly biscuit taco is actually a breakfast masterpiece worthy of repeat consumption. This was pretty delicious, but then again I would probably eat a tablespoon of Tabasco drizzled over a pile of deep-fried ants and still think it was the best thing in the world. This condiment is a safe bet, but it's also a good one.

Taco Bell serves up biscuit tacos with either sausage or bacon, but I've never been an ultimatum type of girl. That's why when a friend suggested mixing bacon bits from one taco into a taco featuring sausage, I looked at her in awe, dumbstruck by the fact I hadn't thought to try this myself. (Important lesson here, folks: surround yourself with brilliant people.) Bacon is like the glitter of the food world — it instantly makes life seem shinier and perfect and more worthy of your time — and combining the two tacos together is a move I did not regret. But you do have to decide if this is worth buying two biscuit tacos instead of just one, and honestly that's a decision I don't feel 100 percent comfortable making for you. Like, I just don't.

6. Eat It As An Open-Faced Taco

Perhaps the simplest trick of them all, this was also the most effective. By ripping off one half of the biscuit shell, this taco immediately became more accessible. You suddenly find the scrambled eggs you heard were hiding inside. You give your cheese some time to breath, and you have the option of loading up your half taco with any of the toppings previously mentioned. You never have to worry about being overpowered by biscuit ever again. And that kind of reassurance can really make you feel like you're at the top of the world — which is great, because it's Cinco de Mayo, you're eating free food, and you kind of are at the top of the world.

You're eating a free biscuit taco, meaning it's going to be extra delicious regardless of how you doctor it up. But if you eat yours plain, I have to be honest — I feel like you're settling. Personally, my favorite option was adding avocado, which made my biscuit taco feel like avocado toast's edgy, hip older cousin you want to brag about hanging out with. But if limited resources mean the best you can do is sprinkle on some hot sauce, you're still probably going to be just fine. Like I said — it's Cinco de Mayo, you're munching on food you didn't have to pay for, and it just so happens to be at Taco Bell, a.k.a. the greatest fast food restaurant in the world. There's no way you can lose.