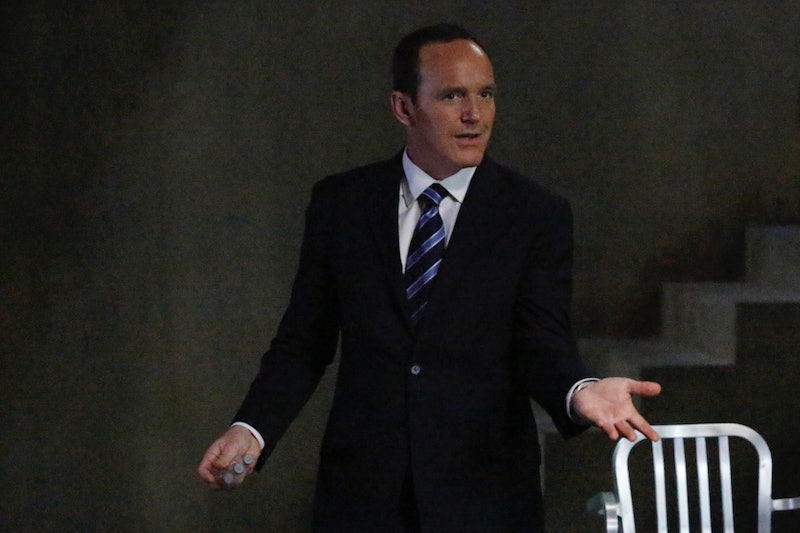 When it comes to Agents of S.H.I.E.L.D., the times, they are a changin'. Ward's been evil all season, Fitz and Simmons have been on the rocks, Skye's a superhero now, and perhaps most shockingly of all, May doesn't trust Coulson any more — which is huge. The show was literally built off her belief in him (remember how Fury chose her specially to keep an eye on him post GH-325?). Unfortunately, all of his shady machinations (combined with Robert Gonzales' equally shady machinations) actually got May wavering in her usually unerring trust in him. Add that to the fact that Coulson's been acting even more erratic than that time he was being compelled to compulsively carve alien maps into any and every flat surface, and... well, he's definitely hiding something major. So what is Agent Coulson's big secret this time? It turns out, we don't have to wait much longer to find out because we're about to be treated to some real, satisfying answers.

According to the summary for Episode 20 "Scars," "Coulson shares a secret he’s kept from everyone" — pretty darn exciting, right? Which secret will we be getting the answers to, though? As is fitting for a show about espionage, there are more than enough secrets to go around. So what's the one that Coulson is set to reveal in the upcoming episode? Let's do a little speculation.

Anything Inhuman-related is more likely to be a Skye secret or a Jiaying secret, as opposed to a Coulson one, but who knows? All of the promos and sneak peeks promise a lot of S.H.I.E.L.D./Inhuman tension in the upcoming episode, so Coulson's big secret could have something to do with the hidden Inhumans base.

We got a sneak peek of Agent Maria Hill, as she and Coulson discussed the whereabouts of Loki's ultra-powerful (and ultra-dangerous) scepter. Maybe the secret's something to do with that? It would definitely pose a major threat if it fell into the wrong hands, and it was a key part of Avengers: Age of Ultron.

Coulson Could Finally Tell Us What Theta Protocol Is

Most likely, the secret has something to do with the mysterious Theta Protocol — finally, because we're due for some answers. So, what's it going to be? A new spin on the storied Avengers Academy? And if the Theta Protocol is in play, signs point to...

I know it might be too much to hope that Samuel L. Jackson would grace the small screen of Agents of S.H.I.E.L.D. for a second time, but a Slashfilm interview with producer Jeff Bell makes a Jackson cameo sound like a viable possibility. Bell said that Episode 20 will fill in some of the gaps from Age of Ultron, and it could potentially pack quite the punch for the two-hour finale. Besides, Fury's whereabouts and his alive/dead status have been pretty questionable since he went incognito, so maybe we're about to see what he and Coulson have been cooking up.