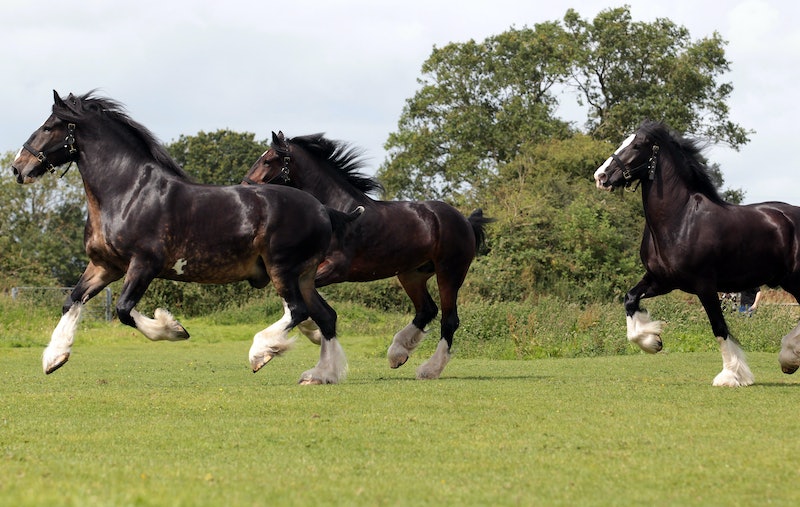 There's no doubt that long distance relationships are hard, but hey, at least we've got frexting and Skype to make us feel close to our friends when they're far away. You know who doesn't have the privilege of using their WiFi so see their BFF's purdy face? Horses. You can't gallop your way to iPhones and opposable thumbs, apparently. But distance still makes their giant horse hearts grow fonder, as evidence by these reunited horses freaking the frack out after being separated for four and a half years.

Should we all be so lucky to have these kind of #SquadGoals. Arthur the horse was separated from his two buddies William and Harry (no, this is not Royal British fan fiction, but it should be) when he was four years old, and hasn't seen them since. His owner was in a position to buy him back in 2012, and was curious to see if the old mates would recognize each other from "foalhood". His owner Sue Blagburn led him to an unfamiliar field where his friends were waiting, and the chill in that pasture was lost so fast that I wonder if horses even have any. They definitely recognized each other, and were (if you will) giddy to reunite once more.

Here are the stages of their horsey reunion:

Have you head hugged a friend lately?

"You're heeeeeere. Hiiiiiii. It's yoouuuuu."

Too many feels to be felt

Oh, and just in case your heart wasn't ripped out of your chest, the Black Beauty soundtrack is playing in the background. Get ready to be doner than done with these three. They're neighing their way into your heart and cracking the cold exterior before you even know what's happening to you.

Horses are actually quite adept at recognizing other horses and even differentiating between people—they recognize each other by their whinnies, and studies show that not only can tell the difference between humans by their faces, but also by their individual voices. Odds are Arthur recognized his owner every bit as easily as he recognized his two old buds.

More like this
Starbucks’ Chocolate Cream Cold Brew Tastes Like This Retro Candy
By Emma Garza
Ask Gen Z: Kate Glavan & The "Ugly Hag Stroll"
By Alexis Morillo
Here’s What Sarah Jessica Parker’s Canned Cosmo *Actually* Tastes Like
By Emma Garza
What Is “Night Luxe?” Breaking Down TikTok’s New Aesthetic
By Courtney Young
Get Even More From Bustle — Sign Up For The Newsletter