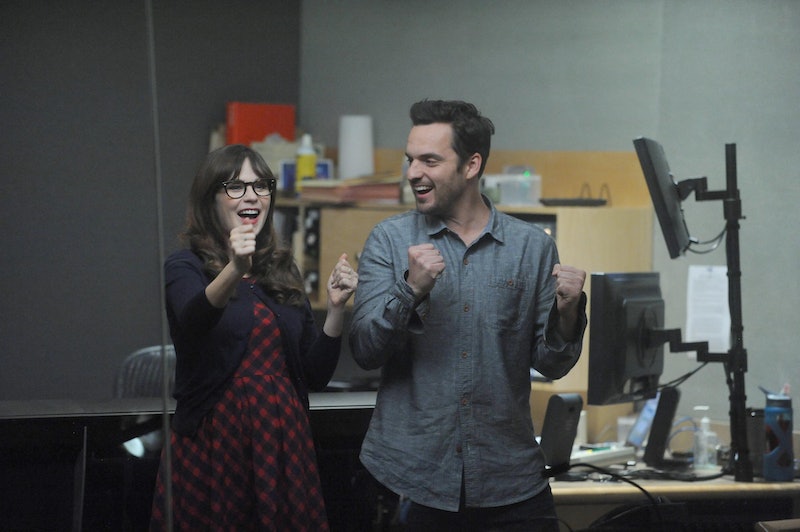 Just when I was starting to think this relationship was over with for good, New Girl has managed to rope me back in with a glimmer of hope… and in the weirdest way possible. During the New Girl Season 4 finale episode "Clean Break," viewers were treated to a very strange detail regarding Nick and Jess' former romantic relationship. I can't believe I'm about to say this, but: Nick and Jess have a sex mug on New Girl . However, before you start freaking out like Schmidt and Coach did, let me assure you that it's a lot less gross than it sounds. Here, let me explain.

Evidently, this mug, which reads "Associated Strategies" was used as some sort of code to help one of them indicate to the other that they were in the mood to… ya know. So when said mug was left on the entryway table "Ass Out," they both knew it was time to get down and dirty. It helped to showcase that they were aroused without arousing suspicion. (Nick always did enjoy some good word play.) Is it slightly odd? Yes. But does it totally sound like something Nick and Jess would do? Absolutely. Without question, really.

Oddly enough, though, that wasn't the most interesting detail to be divulge during this little blast from the past moment. In the middle of this little exchange, Schmidt asked the former flames if they've still been using the sex mug even after they broke up. And while they both immediately assured their loftmates that they haven't, Winston revealed that he had seen that very mug on the entryway table not too long ago, which he confirmed by showing that the mug was in the background of one of his weekly selfie photos with Ferguson. (But that's an adorable detail for another day.)

Nick finally confessed that he was the one who put the mug out, though, we later learn that he only said that to help Jess save face. Apparently, she had gotten slightly turned on by Nick's rather interesting workout regime with a fan a few weeks back, which made her get a little bit of a mug-like mood. Nick said that he totally understood, but when she asked if any of her actions make him feel like putting the mug out, he insisted that he couldn't think of any since he, like Winston, prefer a "clean break."

Of course, he was lying, which he confessed to Jess later on. (And for those of you wondering, apparently Nick gets turned on by shower towels, glitter, and pantyhose.) In fact, all their talking was clearly putting them both in the mood right then and there. Unfortunately, Schmidt came in and interrupted them, but there's obviously still a strong romantic chemistry between these two that has so not run its course yet. And to top it all off — though they jointly agreed to throw the mug out and move on, both of them got out of bed in the middle of the night to retrieve said mug. And when they both thought it was gone, they assumed it meant the other had taken it already. (Little did they know it's now being used as a milk dish for Ferguson.)

So what does this all mean? It means that there's still hope for these two after all. As much as they both claim to be moving on, they're both having a hard time letting go of the special bond they once shared. And now that each of them thinks that the other is in possession of the sex mug, it may be what pulls them back into each other's arms. So don't give up, Nick and Jess 'shippers. The writers are clearly not done telling their love story. Is it time for Season 5 yet?