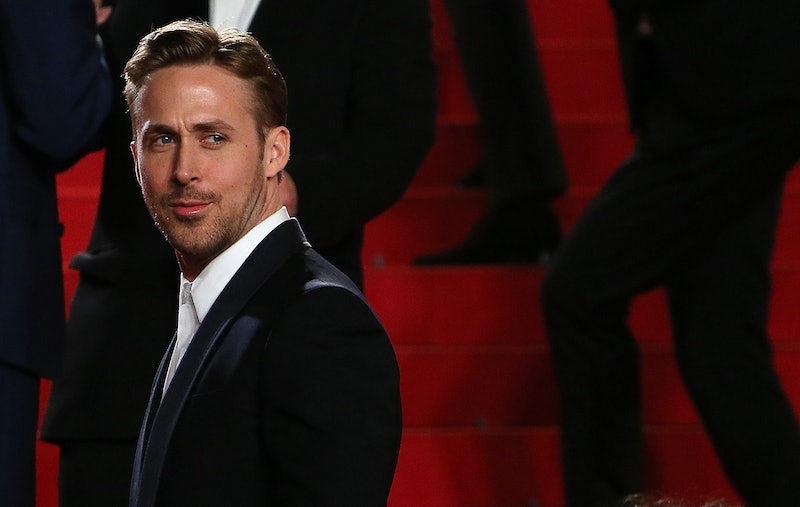 Ryan Gosling may be a serious actor, but he also has a seriously goofy side. Even though he doesn't embrace his Mickey Mouse Club silliness all the time, when he does, it's magical. Some of the best times that he has goofed off was when acknowledging the many Ryan Gosling memes, ranging from actually saying "hey girl" to his touching Vine tribute to Ryan McHenry after the cereal meme creator passed away. As much as Gosling could want to run away from the Internet's obsession with him, it's better when he embraces it.

As if anyone needed another reason to love the Gos, I've rounded up five times when he let the memes into his life. Some are more straightforward, like reading some Tumblr posts aloud or tweeting directly about one, while others are more subtle, like taking a pro-feminist stance when the MPAA was "misogynistic" and gave Blue Valentine an NC-17 rating for one sex scene.

"This is so stupid," he said as he wheezed and almost cried laughing. But then he read one, and it was glorious. Not the inappropriate ones, though — "oh my, these are untoward," he said of those.

Revealing His Confusion About "Hey Girl"

Ironically, during this Q&A, he actually uttered "hey girl" again, making him facepalm.

Defending His Love Of Cereal

His newfound appreciation for social media has so many benefits.

When the meme creator passed away, Gosling recorded a Vine of himself eating cereal in McHenry's honor.

After the MPAA gave Blue Valentine an NC-17 rating for one single oral sex scene, Gosling lashed out, calling the decision "misogynistic." It wasn't quite Feminist Ryan Gosling meme material, but it was close. Read his full quote below:

"You have to question a cinematic culture which preaches artistic expression, and yet would support a decision that is clearly a product of a patriarchy-dominant society, which tries to control how women are depicted on screen. The MPAA is OK supporting scenes that portray women in scenarios of sexual torture and violence for entertainment purposes, but they are trying to force us to look away from a scene that shows a woman in a sexual scenario, which is both complicit and complex. It's misogynistic in nature to try and control a woman's sexual presentation of self. I consider this an issue that is bigger than this film."

More like this
All The Sneaky Lindsay Lohan Movie Easter Eggs In Her New Ad, Explained
By Stephanie Topacio Long
Anne Hathaway’s ‘The Devil Wears Prada’ Anniversary Post Turned Political
By Brad Witter
Sadly, You Can’t Stream 'Minions: The Rise Of Gru'... Yet
By Morgan Leigh Davies
You Might Want To Rewatch 'Elvis' For This Britney Spears Easter Egg
By Grace Wehniainen
Get Even More From Bustle — Sign Up For The Newsletter