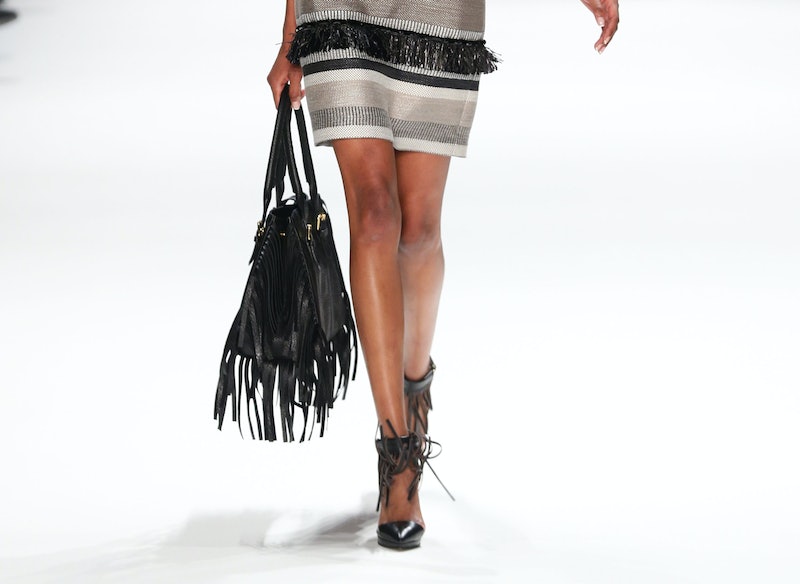 Barney’s is home to chic pumps, expensive suits and, allegedly, racial profiling. The luxury retailer has attracted the ire of civil rights advocates after two black Americans were accosted for purchasing expensive merchandise from the store.

Trayon Christian, 19, was accused by two undercover police officers of using a stolen credit card after he bought a $349 Ferragamo belt at the Madison Ave. location. Kaya Phillips, 21, encountered similar discrimination when four cops approached her and accused her of committing credit card fraud after she purchased a $2,500 Céline bag from the same Madison Ave. store.

Both parties have filed suit against the New York Police Department and Barney’s for discrimination. Christian and Phillips committed the cardinal sin of shopping while black, but their crime is more complex than that. Cultural conversation has pivoted from faulting Barney’s for targeting two Black Americans to criticizing the spending habits of the victims. Can I sigh here, or is it too soon?

Similar convos swirled after Oprah’s run-in with bigots in Switzerland. A little refresher for those who have forgotten: Mother O was in Zurich for Tina Turner’s wedding. She went shopping at upscale retailer Trois Pommes and asked the associate if she could see an expensive crocodile handbag. The store clerk told her no, and explained that the bag was too pricey. I guess $42,000 is a bit much for a woman worth $3 billion.

Many were mortified when Oprah recounted the tale to Larry King. The store issued an apology and the world rebounded on its axis. Still, questions like “Why is Oprah spending $42,000 on a bag?” overshadowed the blatant discrimination she faced from the store clerk.

The pestering of victims about their spending habits is unproductive, and distracts from the real issue: Black people are entitled to shop without being harassed and profiled.

Nielsen’s 2012 report, “The State of the African-American Consumer”, found that Black America’s buying power will exceed $1 trillion in the coming years. Companies should be pining for Black American patrons to purchase $2,500 bags and $349 belts, but Christian and Phillips are supposed to be designating their monies for other endeavors — like reducing debt and saving for down payments.

But here’s the deal: Christian and Phillips aren’t spending money any differently than other Millennials. American Express Business Insights found that Millennials purchase more technological gadgets and fashion apparel than any other generation, and their collective spending increased by more than 25 percent in 2011.

Personal spending habits — including the urge to splurge — don’t exist in a vacuum. Capitalism is partially to blame. Cultural analyst Donna Sabino spoke to Forbes about several factors that influence Millennial spending, including a need for instant gratification. “They grew up in a time of insecurity, with 9-11 and banks cheating people,” she told Forbes. “The traditional institutions and the way things are supposed to be weren’t that way for them. It gave them this ‘who knows what tomorrow will bring?’ and to say ‘why not treat myself?”

Combine this need for gratification with a preference for luxury brands like Ferragamo and Céline and what we have are two normal Millennials spending their hard-earned dollars however they please. It is not cause for alarm that a 19 and 21-year-old are dropping large sums of money to satiate their urge for nice merchandise — except for the fact that the parties in these cases are black, so their spending is indexed in the “welfare queens cheating the system” stereotype. It is a trope that plagues discourse surrounding black American spending habits.

Focusing on the spending habits of Christian and Phillips prevents Americans from having to engage in the race conversation that surely factors into the profiling they endured. Having that conversation means having to talk about the association of Blackness with deviance; the reason that the mere presence of two young Black Americans in a prestigious, upscale retailer like Barney’s would send the store into high alert; the fact that Jay-Z-branded luxury items are sold in Barney's stores but that he may not be welcomed in the store himself if he weren't famously wealthy and successful. That conversation is being drowned out by the voices chiding two Millennials for spending their own cash.

More like this
The Families Of Grenfell Tower Are Still Waiting For Justice, Five Years On
By Bustle UK
The 3 Dating Apps Queer Women & Nonbinary Folks Actually Like
By Emma Carey
How To Get Your Hands On Manolo Blahnik’s Latest Birkenstock Collab In The UK
By Vivian Iroanya and Rachel Mantock
Rihanna’s Makeup Artist Isamaya Ffrench Is Launching Her Own Makeup Line
By Tomi Otekunrin
Get Even More From Bustle — Sign Up For The Newsletter