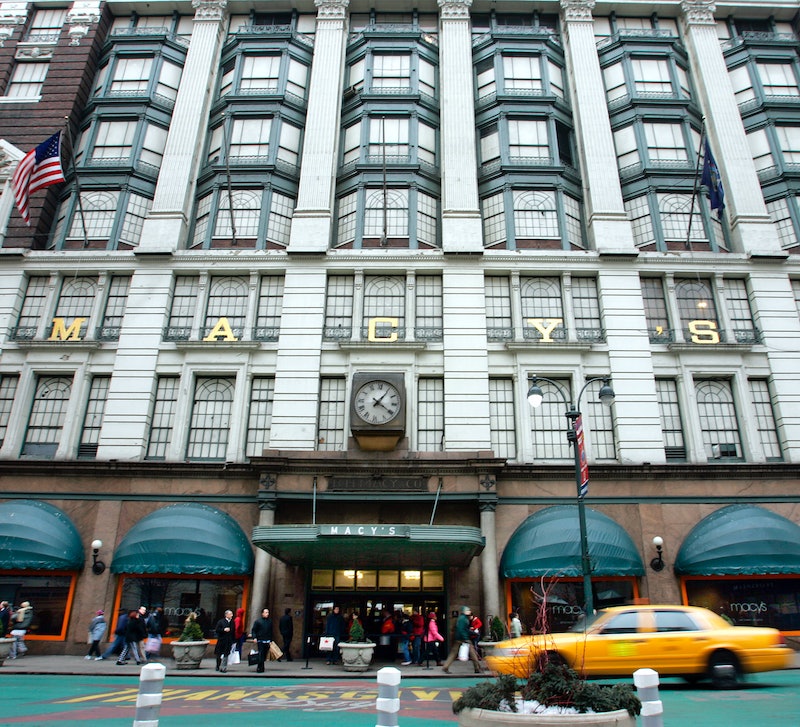 As if the New York Police Department wasn't in hot enough water over stop and frisk, they (and retailers Macy's and Barneys) now have this scandal to worry about: New York Attorney General Eric Schneiderman will be investigating complaints that shoppers of color are being unfairly questioned by police outside department stores after purchasing luxury goods. Schneiderman announced the investigation Tuesday, and is giving the two department stores until Friday to turn over information about their policies related to "questioning and detaining customers based on race." AKA, their policies on racial profiling.

"When you're painted brown, a black Amex card can't protect you from a salesperson who takes one look at you and makes a judgment call about the state of your finances – and your ability to pay for whatever it is they're selling,"Teresa Wiltz wrote in the Guardian. "And sometimes, as was the case of the security guard at Lord & Taylor, the ones doing the judging are black and brown, too. Institutionalized racism is something that we've all internalized."

As Wiltz also points out, these companies can't afford to alienate black customers: According to a recent Nielsen report, African-Americans make up $1 trillion in buying power, and they shop more frequently than other groups.

"With a current buying power of $1 trillion that is forecasted to reach $1.3 trillion dollars by the year 2017, the importance of connecting with African-American consumers is more important than ever," Neisen's press release points out.

Macy's has faced allegations that it's racist before. Actor Rob Brown, from HBO's Treme, was pulled aside, handcuffed, and detained for an hour by police after he bought a $1,350 Movado watch for his mom. Another complaint was made by 56-year-old fitness trainer Art Palmer, who says police "surrounded" him and demanded to see identification. after he purchased $320 worth of Ralph Lauren Polo men's clothing.

A Barneys customer made the cover of the New York Daily News for a similar experience last week in the department store. Trayon Christian, a 19-year-old African-American man from Queens, said he was stopped by police after purchasing a $349 belt at the store's flagship on Madison Ave. He paid with his debit card, showed his ID, and then was stopped shortly after leaving by two undercover NYPD cops, who claimed his card was fake and that someone had called in to Barneys and reported it.

“The detectives were asking me, ‘How could you afford a belt like this? Where did you get this money from?’” Christian said. He was handcuffed and held in a detaining cell for two hours before he was released.

“I brought the belt back to Barneys a few days later and returned it," he said. "I got my money back, I’m not shopping there again. It’s cruel. It’s racist.”

Christian is now suing Barneys, and the company's CEO is set to meet with Rev. Al Sharpton to discuss Christian's claims, as well as those of another customer who was stopped after buying an expensive handbag last week. Macy's is no stranger to similar lawsuits: In 2005, the company paid $600,000 to settle a lawsuit from New York City Latinos and African-Americans alleging racial profiling as it applies to "particular scrutiny of theft."

A petition spurred by complaints like these is calling on Jay Z to cut the ties of his design collaboration with Barneys, which is set to carry his capsule collection. Saying that he's no stranger to this sort of shop, stop, and search policy himself (and neither, for that matter, is Oprah), Jay Z says he's waiting to hear the results of the investigation before making any decisions — perhaps in part because the proceeds from his collection will benefit his Shawn Carter Foundation.

"Making a decision prematurely to pull out of this project, wouldn’t hurt Barneys or Shawn Carter, but all the people that stand a chance at higher education," Jay Z wrote on a statement on his website. "I am against discrimination of any kind, but if I make snap judgements, no matter who it’s towards, aren’t I committing the same sin as someone who profiles? I am no stranger to being profiled and I truly empathize with anyone that has been put in that position."