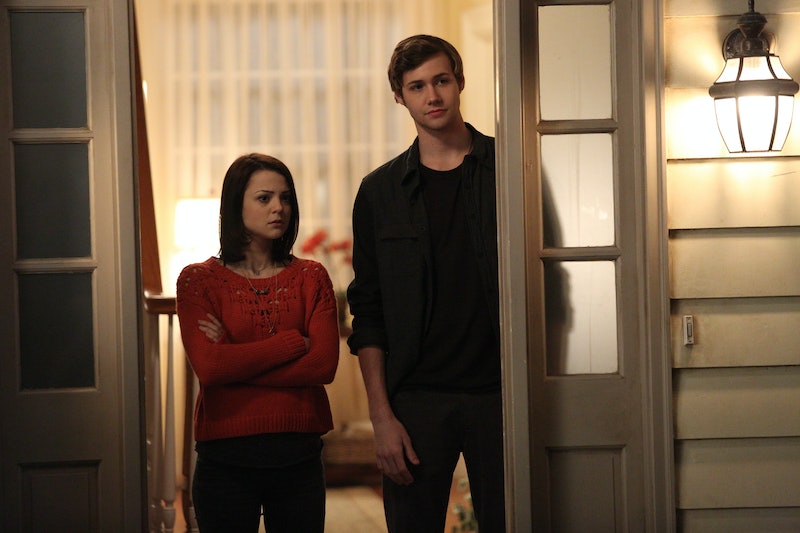 "He's gone." I've never felt more into the CarCrash 'ship than I did at the end of Tuesday night's episode of Finding Carter. Well, maybe saying that I'm "into it" is an exaggeration, but I felt for Carter because she really just can't catch a break. Like any good Finding Carterfan, I'm still reeling from Crash shooting Max during Season 1 — even though Max is alive, well, and being the great guy we know and love by forgiving Crash and calling him a friend already. But there's no denying that CarCrash love each other, which is why I obviously wondered if Crash will return to Finding Carter after the army. Carter deserves a semblance of a normal, teenage romance, right? Well, don't worry, CarCrash fans, because Crash will be back.

OK, fine, maybe I shouldn't have been worried at all about Crash coming back after enlisting in the army at the end of Tuesday's episode. I mean, this is the same guy that shot Max and got released from prison after what seemed like only a few days — if committing a crime couldn't keep him away forever, enlisting certainly can't. But my heart broke the tiniest bit as I watched Carter's hands shake as she read Crash's farewell letter for the first time and again when Carter curled up in Elizabeth's lap and sobbed. I know, how could I have any feels about CarCrash? Well, even Elizabeth has started believing that Crash has turned over a new leaf, so it's a good a time as ever for me to give him another chance as well.

So, when with Carter's "villain" return to sleeping on an air mattress in the Wilson's living room? Well, according to the Finding Carter Season 2 midseason trailer, he'll be back before the Season 2 finale.

And, unlike when Crash returned at the start of Season 2, I'm optimistic that he'll actually be a character I can support when he returns from the army. He's grown up — at least enough to know that "skipping town" isn't the way to solve your problems (especially when you have no money, no plan, and an extremely shady uncle), considering what happened last time. It certainly seems like, now that Maxlor has fallen to pieces, Finding Carteris making CarCrash the 'ship to root for — well, if we can forget about Carter kissing Max in that trailer, of course (#nostalgiafeels).

More like this
These 2 Tragic ‘Stranger Things’ Finale Moments Were Improvised By The Actors
By Grace Wehniainen
What’s New On Netflix: Lana Condor’s Ghostly Comedy & A Sexy Reality Series
By Arya Roshanian
Jesse Tyler Ferguson Had A Funny Run-In With A Fellow ‘Modern Family’ Alum
By Grace Wehniainen
'Stranger Things' Cast Thinks It's "OK Not To Label" Will Byers' Sexuality
By Alyssa Lapid
Get Even More From Bustle — Sign Up For The Newsletter