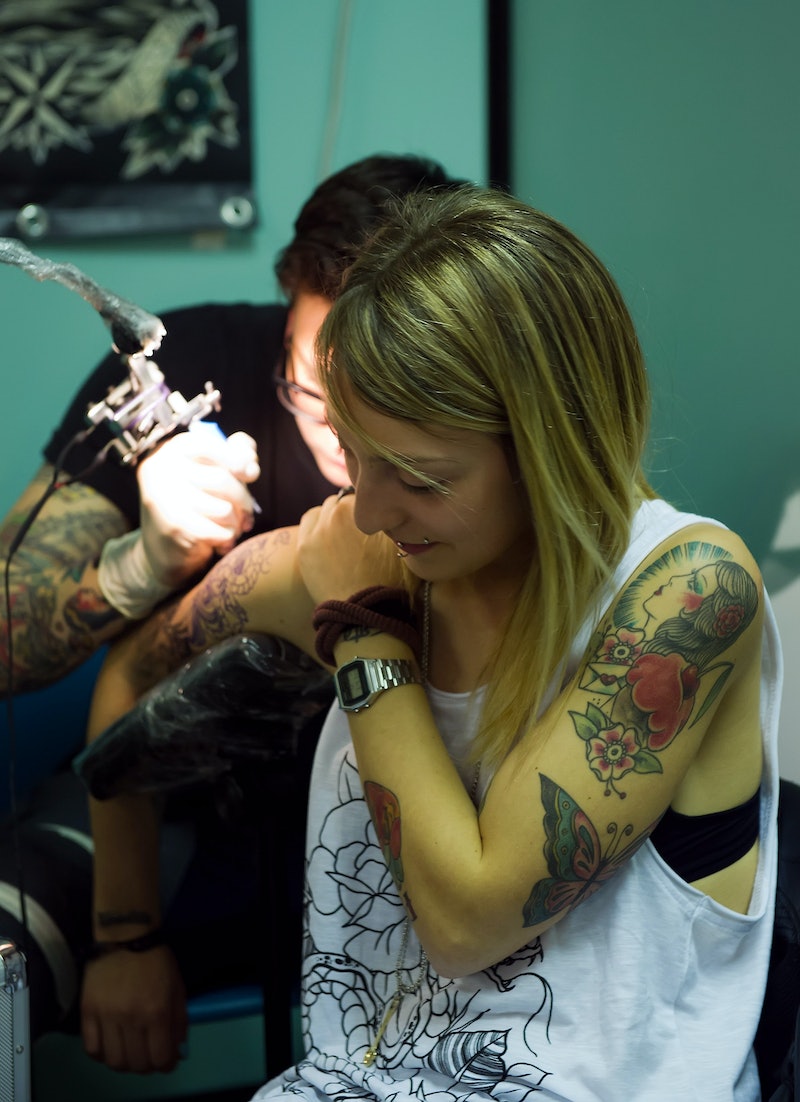 Once upon a time, tattoos were pretty much only seen on men, but in recent years, tattooed women have been rising in numbers... and the world should be very, very thankful for that indeed. Tattoos are a beautiful (and painful) way to express ourselves, and as body art becomes more accepted in the workplace, it's being found on more and more people throughout the world. About 20 percent of people living in the United States have been inked, and that number is only continuing to grow.

Sadly, many people still view women with tattoos as "trashy" rather than classy. For those of us who actually have ink on our skin, this is one of the most ignorant things someone can say. While there will always be people who make stupid decisions, most tattooed women spend a very, very long time deciding what we're going to put on our bodies. We know all the sneaky places to hide them if we need to, and thanks to the marvels of makeup, we even know how to cover them up if we're in a situation where they're deemed inappropriate. We're well aware that getting a tattoo is permanent, but we know how to do it right.

Aside from the fact that tattooed ladies are mind-blowingly hot, there are plenty of other reasons to want to have sex with a woman with body art. It's past time that we kick the negative stigma to the curb and give all the tattooed women out there the love (and orgasms) they deserve. If you actually need to be convinced as to why you should get naked with someone who believes that anything worth showing off deserves a great paint job, check out these reasons for why your next bedroom visitor should definitely be a woman with tats.

Someone who isn't vanilla with their appearance isn't going to be vanilla in bed. A good tattoo design takes a lot of time and effort to come up with, and if she thought it up herself, she's likely to think of a lot of cool things to try out in the bedroom, too.

As a matter of fact, they might even enjoy it. Getting inked isn't something you do if you have a low pain tolerance. Tatted women are tough, and they aren't likely to get scared of getting a little rough in the sack.

If you're going to make a decision that will stick with you for the rest of your life, you'd better make damn sure that it's exactly what you want. Maybe that's why 31 percent of people say that their ink makes them feel sexier, according to a 2006 Pew Research Center survey of 18-to 25-year-olds. Tattooed girls have been there, done that, and their self-assured attitude is guaranteed to shine through both inside and outside the bedroom.

4. It doesn't ruin their chances at a kickass job

Despite the fact that 76 percent of employees think that getting a tattoo hurts your chances of getting a job, 73 percent of people say that they would hire someone with visible tats, according to the Pew Research report. Only 4 percent of inked employees say that they've faced anti-body-art discrimination in the workplace. So not only do women with tattoos have the money to pay for all their beautiful art, but they also have plenty of room to further their career. And let's face it: who doesn't love an ambitious woman?

A 2012 study of 120 young adults published in the Journal of Sexual Medicine found that tattooed people are more open sexually than those without. A beautiful piece of art should be seen, not hidden away, and having sex is the perfect opportunity to get naked and show it all off.

Whether it's for work reasons, personal preference, or just pure coincidence, about 75 percent of inked individuals have their body art in places that are generally hidden by clothes, according to a 2010 Pew Research Center study of 830 18-to-29 year-olds. So even if she's beautiful while dressed, just imagine how amazing it will be to take her clothes off and realize that there's even more fun stuff than you expected under all that fabric.

7. They think long and hard about their decisions

Tattooed people are said to be greater risk-takers, but they're smart ones. Only about 16 percent of people with body art regret their work and only 0.1 percent end up getting it removed, according to the Pew report, it would appear that even though we might take risks, we don't regret our choices. If you sleep with a tattooed woman, you can be sure that she's making a decision that she believes won't haunt her for the rest of her life, and she probably feels the same way about her former sexual encounters, too.

Women are a treat to see in general, but when your partner in bed has tattoos, there's even more to check out. Even if you're pretty accustomed to all the fun body parts that come out to play when you get naked with a girl, you'll hear "A Whole New World" start playing when you undress a lady with tats. Every body is different, but sleeping with an inked woman ensures that what you're seeing is completely different from anyone else you've had sex with before.

9. They treat their body well — and yours too.

An unsettling number of people think that women only get tattoos for attention, or that by getting inked, they're destroying their skin. But that's the complete opposite of the truth. We view our bodies as temples, and we know that some of the world's most beautiful temples have some amazing art. When we decide to add something new to our bodies, we're saying that it's worthy of taking up space on the thing that holds our souls. We love ourselves both inside and out, and when we get you in bed, we'll treat your body just as well as we treat ours.

10. You'll love them for more than just one night

If you believe that a lady with ink isn't the kind you bring home to mom, think again. About 60 percent of people who are married, engaged, or living with their partners have body art, and that number is only going to grow. Tattooed women might like to take risks and change their appearances, but their love is just as constant as any non-tatted woman's.

More like this
The Best Time To Date After A Breakup, According To Experts
By Bustle Editors
Hinge's New NFAQ Feature Is Demystifying Queer Dating
By Emma Carey
Virgo & Sagittarius Zodiac Compatibility, According To Astrologers
By Kristine Fellizar
How Do I Deal With Both ED & Premature Ejaculation?
By Sophia Benoit
Get Even More From Bustle — Sign Up For The Newsletter