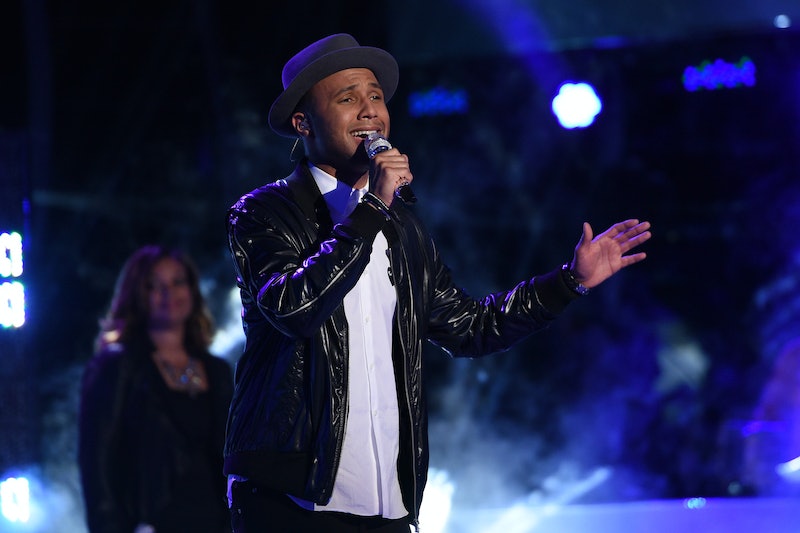 I would like to preface this by saying it's not unfair that Rayvon Owen is still competing in the Top 4 on American Idol — his fans have used the cards they have, namely the American Idol Twitter Instant Save, to keep him in the competition for as long as possible, and there's nothing wrong with that. There is something wrong with the premise of the Instant Save. That a contestant who didn't necessarily get the least amount of votes could be going home before a contestant who got an undisclosed lesser amount of votes seems quite clearly unfair. But add on top of it that the same scenario could happen multiple weeks in a row and you've got yourself a regular coup d'état, which for a governing body as rigid as American Idol, seems misguided.

Of course, I see the appeal of the Instant Save, a tactic also employed on rival singing show, The Voice. It's nice to think that your favorite singer could be saved if they just had one off week that landed them in the Bottom 2. But when it comes down to it, the Instant Save lacks enough structure to really be fair to American Idol's contestants and adamant fans. Consider, for example, if that contestant who just had one off week received the second least amount of votes and then was eliminated because they received two less tweets in the Instant Save, as was the difference between India Carney and Corey Kent White a few weeks ago on The Voice — it really wouldn't seem fair. There are a few more reasons, too...

If you're not saving constestants who could win, then what's the point? The Instant Save keeps singers in the competiton who likely have less fans than the remaining group, but have more fans with a proclivity for Twitter than the other contestant with them in the Bottom 2. On American Idol this season, Rayvon's fans have been rallying together on Twitter to make him the victor in all four Twitter Saves, but have not been able to drum up the numbers to keep him out of the Bottom 2 for four weeks straight. That's not a statement to Rayvon's talent but to the number of American Idol voting fans he has; and when it comes to winning American Idol, you need the votes, not the tweets. What's the point of saving someone who will just be eliminated the moment the Instant Save is no longer in play?

It Takes Out Contestants Who Could Feasibly Win

The unfairness of being able to save that person with the Instant Save comes in when you think about that there could be a large discrepancy of votes between the Bottom 2, but because the person with the least vote has more Twitter-savvy fans, the person with many more original votes is sent home. Let's say that other person just had an off week, but could bounce back to inspire their normally large voting fanbase to get back on their side in the coming weeks, and eventually win the damn thing. It simply doesn't seem right to have an original vote that is then overthrown by another vote that takes place in a different medium. And in that way...

It's a Little Shady

Most importantly, Twitter is a fickle medium. Perhaps if American Idol fans were told on a Wednesday night who the bottom two were and could call and text in their votes based on the Wednesday night performances for a Thursday night results show, that would seem a fairer version of the second chance vote. But as it is on Twitter, in a sea of opinions and cat memes, the tallying up of#SaveSoAndSo hashtags seems a little too rushed and mysterious (five minutes to send your tweets, and 12 seconds to count them!) to be totally indisputable.

But you know what would shut me up forever? If Rayvon won American Idol . If a four-time Twitter Save was able to eventually garner enough votes because he was given the opportunity to stick around longer, then that might show that the still Save isn't exactly fair, but it does have a purpose. We'll just have to wait and see... in the meantime, keep Twitter out of singing show results, OK?

More like this
Travis Barker Has Been Hospitalised In California With Reports Of Pancreatitis
By Sam Ramsden
How To Listen To The 'Love Island' 2022 Soundtrack
By Liv Facey and Sophie McEvoy
These 10 Wild Real Housewives Fights & Moments Are Andy Cohen’s All-Time Faves
By Grace Wehniainen
Drake’s Net Worth Will Have Critics Saying “Honestly, Nevermind”
By Hugh McIntyre
Get Even More From Bustle — Sign Up For The Newsletter