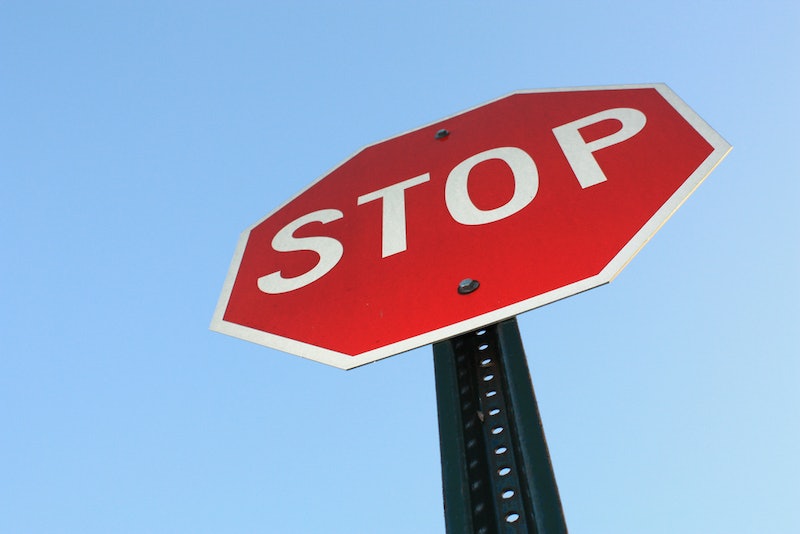 We've all been using it for years — but does anyone actually remember where “stahp” comes from? Like “yaaas,” it's clearly an alternative spelling to an extant word — in this case, “stop,” as opposed to “yes” — but how on earth did it become so prevalent, particularly on the Internet? Out of sheer curiosity, I decided to do a little digging to see if I could rediscover the roots of this ubiquitous expression of discontent. If we're using it so often, we should at least know where it comes from, right?

Let's start with the obvious: “Stahp” means exactly what you think it means, i.e., “stop.” Urban Dictionary has a few related entries for it; the one for “stahp it” lists both “a very passive aggressive way to say 'stop it'” and “a phrase used after you see something very cute, funny, or cool.” In my head, it always sounds like it's being pronounced by Linda from Bob's Burgers.

However, it's the top rated Urban Dictionary definition that gives us a clue as to where we should start looking with regards to discovering its origins: “In memes, simply 'stop,' usually meaning 'stop doing something horribly wrong.'” Ah! Memes! There's only one place to go for information about memes, and that's Know Your Meme.

Where Does It Come From? Part One: STAHP, RAHN

Know Your Meme's entry on “stahp” is wonderfully detailed, largely because the term has been in use since 2011 (which, as we all know, is an eternity in Internet time). Initially a phonetic spelling of Sammi Giancola's accent, “Rahn” — that is, “Ron,” as in Ronnie Oritz-Magro — became something of a catchphrase after Crasstalk used it in a liveblog of the season four premiere of Jersey Shore. The episode “And the Wall Won,” however, gave rise to a meme in its own right:

“Stahp Rahn” was subsequently added to the Urban Dictionary in September of 2011, pegged to the definition, “a phrase used to say, 'I'M DONE'; Jersey Shore slang for 'Stop Ron!'; also used when someone is angry at you and you want them to calm down.”

Where Does It Come From? Part Two: Snowclone

These days, however, the form of “stahp” we're all probably most familiar with is its “snowclone” version. What's a snowclone? As linguist Geoffrey K. Pullum described the phenomenon, put it, it's “a multi-use, customizable, instantly recognizable, time-worn, quoted or misquoted phrase or sentence that can be used in an entirely open array of different jokey variants by lazy journalists and writers.” The definition, by the way, existed before the word itself did; Pullum penned it while attempting to figure out what the appropriate word for it might be. “Snowclone” was later suggested by Glen Whitman and subsequently adopted.

The snowclone form of “stahp” is a four-panel comic, usually featuring the exact same image zoomed in a little closer each time, in the following sequence:

Its first known usage appeared on a Tumblr which is sadly no longer functioning on March 18, 2012:

It made its way to 9gag not too long after, and, well… you know the rest.

As time went on, "stahp" began to have a life separate from the meme that spawned it. It's typically used on the Internet, because the Internet is the only place in the world where spelling “stop” as “stahp” is acceptable. Grumpy Cat is a known proponent of the term, as are a number of other Internet personages. Here are some of the more notable examples of the meme in action:

7. HUMAN STAHP I MEAN IT THIS TIME

And there you have it. Now staaaaaaahp.