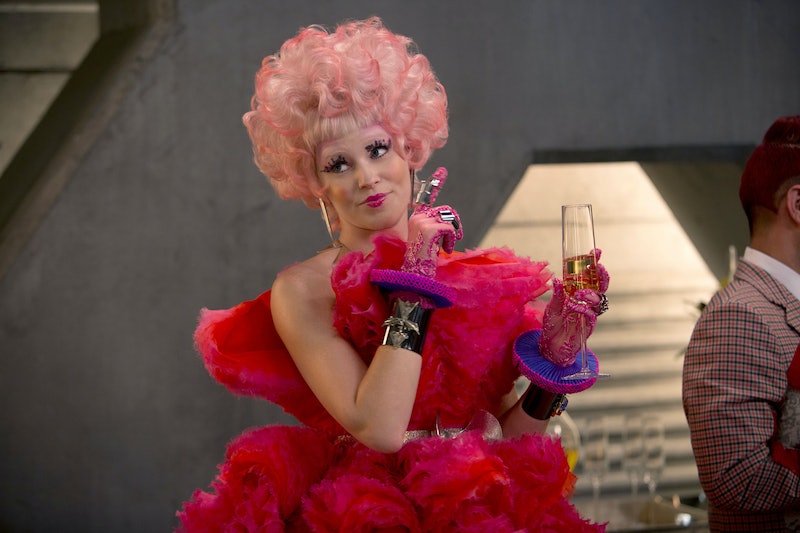 There are so many things I love about The Hunger Games trilogy and movie series including (but definitely not limited to) Effie Trinket's makeup and clothes, in all their eccentric glory. For me, the entire premise of The Hunger Games was a much needed breath of fresh air that pushed the stagnant, once popular vampires out of popular culture. Now don't get me wrong, I am a sucker for vampires; I loved the books and movies of the Twilight Saga and I still enjoy The Vampire Diaries and True Blood (I am lagging behind with this one). But it had to end somewhere. It only took one look at the Young Adult section in a local bookstore for me to realize the vampire genre had been done to death — it was saturated with Twilight style, one-worded titles, and covers in midnight shades.

So when The Hunger Games came along, I was parched of contemporary fantasy and lapped it up like a thirsty labrador. I devoured the novels as fast as I could (which is not so fast) and I have watched each movie in the cinema because nothing beats seeing your favorite literary series on a big screen with delicious snacks and cup holders. Seeing the movies in the theatre rather than waiting for the DVD release allowed me to totally indulge all my senses in the drama.

There isn't anyone in The Hunger Games who knows more about drama than Effie Trinket. She's by far the most avant-garde dresser of the series, she knows how to work an audience, appear in public, and sometimes she can be a little OTT...

And wouldn't it be awesome to dress like Effie? Unfortunately, we don't all have an array of couture gowns hanging in our wardrobes, but we can utilize another of her biggest style assets: makeup. So in honor of the darling of the Capitol, here's how to create Effie Trinket makeup at home. Watch out: spoilers galore!

To create a canvas on which to work with, I followed my usual base makeup routine including: applying moisturizer, a light foundation (Bourjois Healthy Mix in "Vanilla"), and a light blusher (a Bourjois blusher called "Rose Frisson").

The Queen Of Green

Effie is seen here in a blue dress with green hair. Her makeup matches her attire aside from her stand out lipstick. I thought we should start with this look first as it is from The Hunger Games (the first movie).

First I lined my lower lash line with a MAC eyeshadow in "Electric Eel."

After this, I grabbed my super cheap eyeshadow palette by Technic and picked the brightest green as my chosen hue.

I applied the green to my eyelids, taking care to go right up to my eyebrows like Effie and cutting it off where my eyebrows ended instead of sweeping down in a fuller arch.

Next I applied my mascara, Lush's "Eyes Right."

Finally, I added doll-style lipstick to the center of my lips. I had originally planned to use pink — like Effie's shade — but upon further inspection, my pink wasn't quite the right color. So after conducting experiments in mixing eyeshadow with lipstick (and failing), I opted for this red shade of Boots' Natural Collection Moisture Shine lipstick in “Crimson.” I liked this look, but I found it was a bit too bright and clashing for everyday wear.

This is my favorite Effie look up to date. Ms. Trinket wore this beautiful butterfly ensemble to the reaping for the third Quarter Quell in Catching Fire. The butterflies may have been a metaphor for the fact that Katniss and Peeta have evolved since their last time at a reaping and this time they are more prepared and knowledgeable about how corrupt Panem is. It could also be a metaphorical nod to the fact that the two teens were just 16 at their first reaping — adolescents — and at their second reaping, one year on, they have been forced to mature very quickly due to the horrendous experiences they endured in the previous tournament. They were caterpillars, but the games forced them to metamorphose into butterflies.

To start, I lined my eyes (top and bottom) with eyeliner.

I used this super thrifty eyeliner, which is really great and has a pointed nib like a felt tip pen.

Next, I added a bright yellow eyeshadow (a Barry M Dazzle Dust) to my eyelids, right up to my eyebrows and down my cheekbones.

I then added a touch of red/pink — from the aforementioned Technic eyeshadow palette — to the inner corners of my eyes and blended so that it made an orange shade. I also added a layer of my Lush mascara.

Unfortunately, I didn't have any fake butterflies to chop up and stick on my face, so I opted for face illustrations instead. As you can see, I can't draw well and this look would have been way better with pretend butterflies. Although it's not in-your-face-Effie, I think it would make an awesome festival makeup look.

Here is Effie, but not as we once knew her. She is safely hidden away in District 13 after showing her support for Katniss and her rebellious movement. In Mockingjay — Part 1, Effie has transformed due to the very different circumstances she finds herself in and she has adapted her look to suit the situation.

Like Effie, I lined my top lashes, using the same eyeliner pen as before.

I added mascara to open my eyes up to contrast against the heaviness of having eyeliner solely on my top lash line.

Next, I applied a super cheap Technic lipstick in a natural shade named "Bare All."

To finish, I added a slightly pinker shade to the middle of my lips, in true Effie fashion. I used a Collection 2000 lipstick in "Perfect Pink." I thought this District 13 look was the most wearable and a modern take on the "natural look."

So become an avant-garde makeup artist at home with these Effie Trinket makeup looks. Can't decide on your favorite? Write them on paper slips, put them in a glass bowl, and pick them out in true Effie style. And may the odds be ever in your favor!