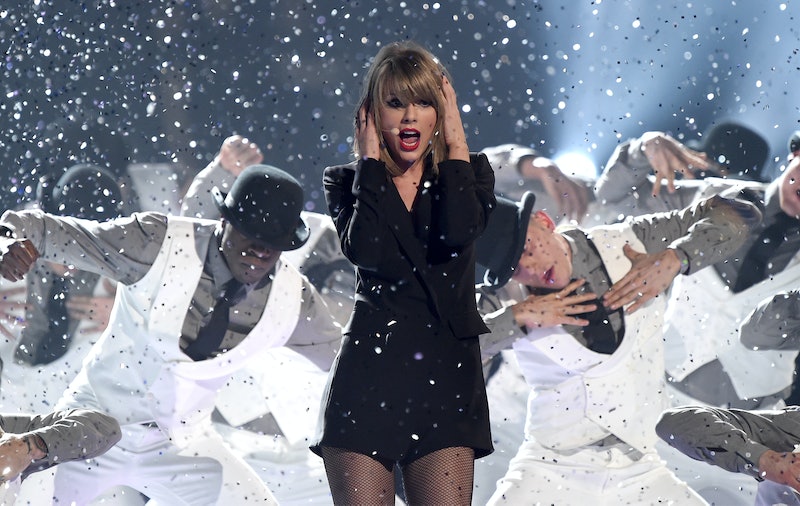 The countdown has officially begun to Taylor Swift's "Bad Blood" music video, which will premiere at the Billboard Music Awards on Sunday, May 17. Although T. Swift has kept tight-lipped about what's going down in the vid, her friends Zendaya, Cara Delevingne, and Hayley Williams were on set in April and she also posted a teaser poster on Twitter that hints at a Sin City vibe. With those hints combined with the fact that the song is about being backstabbed, there will probably be some physical fighting this time around. Joseph Kahn is directing, and after what he helped Swift do to a man's heart (and car) in "Blank Space," fans can expect some insanity this time around, too.

In her last two videos, Swift hasn't been subtle about the messages in her songs. In "Shake It Off," she shook off her haters by killing it with a bunch of different dance styles, and in "Blank Space," she took her "long list of ex-lovers" and killed them off once they scorned her. Whether or not there is actual backstabbing in "Bad Blood," I bet there will be at least one bullet hole that a Band-Aid just can't fix. In fact, I have six guesses about what will happen in the video based solely on her poster.

1. Swift & Her Friends Are Vigilantes

I don't think Swift would ever just be a stone-cold killer, but as Catastrophe, she could be capturing bad guys and gals — especially those who backstabbed others. And Band-Aids don't fix bullet holes, so some people may not survive the video.

2. The Ladies Are An All-Female Superhero Team

Swift and Williams are super heroes of the music industry, so why not make them real heroes? The dark image for the poster hints at a more villain tone than heroes, but she could just be playing games.

3. Swift Does Some Backstabbing

Since Swift is always the good girl in her videos, what if she turned the tables and stepped over to the dark side? She could show the perspective of the backstabber, giving a well-rounded look at the storyline.

Catastrophe doesn't just have to be a play on words — maybe Swift & Co. make people who were backstabbed feel better by giving them cats. Olivia and Meredith could be the real stars of the video.

This is the least likely scenario, but since "Bad Blood" is reportedly about Katy Perry, Swift could finally air their dirty laundry with the video's storyline. Considering she didn't name names in the song or in any interviews, it probably won't happen, but I won't rule it out.

6. It's All One Epic Video That Doesn't Follow Any Rules

If it isn't any of the other ideas I had, it will probably be some epic concept that only Swift could come up with. No matter what happens in "Bad Blood," I'm excited, and you should be, too.