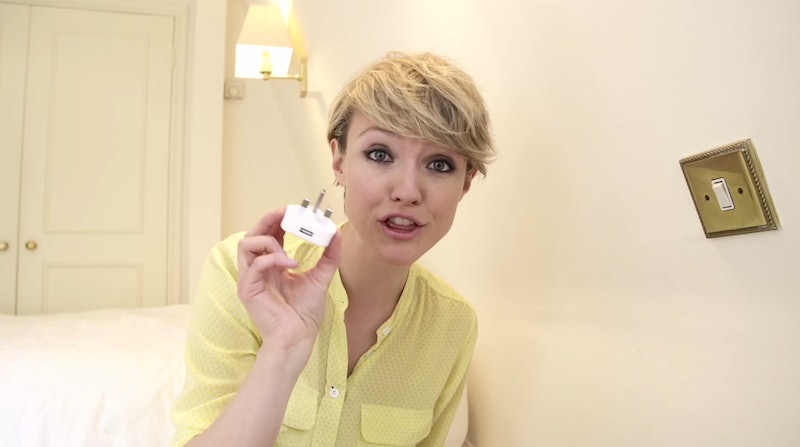 Last time we visited BBC America’s Anglophenia, they were teaching us how to pronounce bizarrely spelled British place names. Now, host Kate Arnell takes American Anglophiles on a tour of British domestic life, helpfully explaining how British homes are different from American homes, from why Brits have separate hot and cold water faucets to why toilets are often separate from bathrooms. That's right. Get prepared for some transatlantic madness.

Unsurprisingly, most of the oddities of British homes have to do with size and age: Britain is a small country with a lot of people, so you won’t find many McMansions with large laundry rooms and six-car garages hanging around English cities and villages. (Unless, I suppose, you count the castles and stately homes, which—despite what fancy period films and historical romance novels tell us—are not exactly thick on the ground.) A lot of homes in the U.K. are also quite old by American standards, and many of their quirks are the result of converting old buildings to modern electricity and plumbing. If you love all things English like I do, even the most banal aspects of British homes (Look! Large electrical plugs!) seem sort of dear and wonderful.

Check out a few aspects of English homes that you might find really strange:

Washing machines in the kitchen

A lot of British homes have small washing machines in their kitchens. Many of these machines are washer/dryer combos, meaning that, after the machine finishes washing your clothes, you turn a knob and it’ll also dry them. Can I just say, as someone who, until about a year ago, had to go to a laundromat throughout entire my adult life, that these machines are amazing? Why do we not have more of these in the United States?? They are small and can fit in tiny English kitchens, so why couldn’t they fit in any of the crappy apartments I’ve lived in in the U.S.? Why?

Bathroom light switches on a string

Having separate hot and cold water taps is rooted in a history of having the water heater separate from the cold water supply. As Arnell points out, that’s not necessary anymore, but a lot of people keep the separate taps out of nostalgia. I think this is an area where the US has the UK beat. Separate taps are charming and all, but they are a huge pain in the arse when it comes to actual use. (As the video shows, if you want warm water, all you can do is sort of flutter your hands between the hot and cold.)

Britain has giant three-pronged plugs. If you visit England from abroad, you can buy plug adapters, but keep in mind that the voltage used for electrical appliances in the US is also different from that used in the UK (If you need to, you can buy dual-voltage appliances, or get a voltage converter).

Watch the whole video below, and check out other Anglophenia videos here.