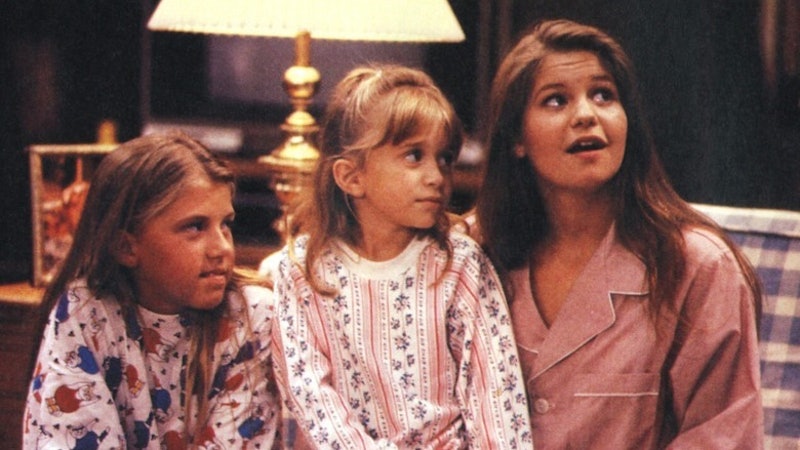 Last month, children of the '90s rejoiced when it was announced that Full House is getting a reboot in the form of Fuller House , a spinoff series that will span 13 episodes on everyone's favorite streaming video service, Netflix. It was basically the best news ever, and proves just how powerful the whole nostalgia movement among millennials really is. Do we NEED a Full House reboot? Not really. Do we want one? OBVIOUSLY. Fuller House will doubtless be a massive success, and given that nearly all of our original favorites will be returning for the series, I'm pretty excited to relive some of my childhood glory and find out what's been going on with the Tanners and Co. And while we don't know too much of what Fuller House will have in store, one thing is for sure: the show is anything but a reunion.

Candace Cameron Bure, who plays DJ, recently revealed that her character will be the central focus of the show, and will see DJ call on Kimmy and Stephanie to help her raise her three kids after the death of her husband. If that seems sorta morbid, don't worry — this is still a sitcom, after all, so there will be plenty of laughs as well as more touching emotional moments. Cameron Bure insisted that Fuller House is a "fresh take" on the original series and way more than just an excuse to be nostalgic, so we'd all better get on board with the idea of the show as its own thing.

Here are 6 reasons we need to treat Fuller House as a show in its own right.

It's NOT a reunion

Sure, most of our old favs will be back in adult (or... older adult) form, but Bure insisted it's not a reunion, it's a spin-off. Fuller House will doubtless have a different focus and feel about it than Full House did, not only because the characters are older with very different lives, but because it's 2015, not the '90s, and TV has changed quite a bit in the interim.

Comparing it to the original will leave you disappointed

Full House was GENIUS, and we love it... but Fuller House is not going to compare in any way. Hoping it's going to be exactly like the original will not only lead to disappointment, but it will keep you from fully enjoying the show in its new incarnation. Don't do it to yourself.

We all had one Full House character we loved more than the others, but guys, the show has been off the air for 20 years. So much has changed! Sure, you can't forget everything you know about Uncle Jesse's love of Elvis, Joey's puppetry, etc., but you can try to detach from those views of them and learn to love the people they've become NOW.

It will give the series wider appeal

Everyone who grew up with Full House will no doubt tune in for the spinoff, but the great thing will be having new audiences introduced to the series that know nothing about the original. Seeing Fuller House as its own entity means more people will be able to discover and appreciate it anew.

There will be way more storylines to explore

I don't know why, but I feel like being too attached to the Tanners as we once knew them is extremely limiting. Understanding that they're now completely different people with whole new lives opens the series up to explore so many new avenues and developments and means Fuller House might have some real longevity.

If Mary-Kate and Ashley Olsen don't return as Michelle, which is looking pretty likely, they might decide to not have her on the show at all. That'll be pretty tough to accept, but then add on the fact that we'll likely be introduced to tons of new characters that our old favorites met over the years, and there's a lot to get used to. If you try and see Fuller House as its own thing, this will be just slightly easier to deal with... hopefully.