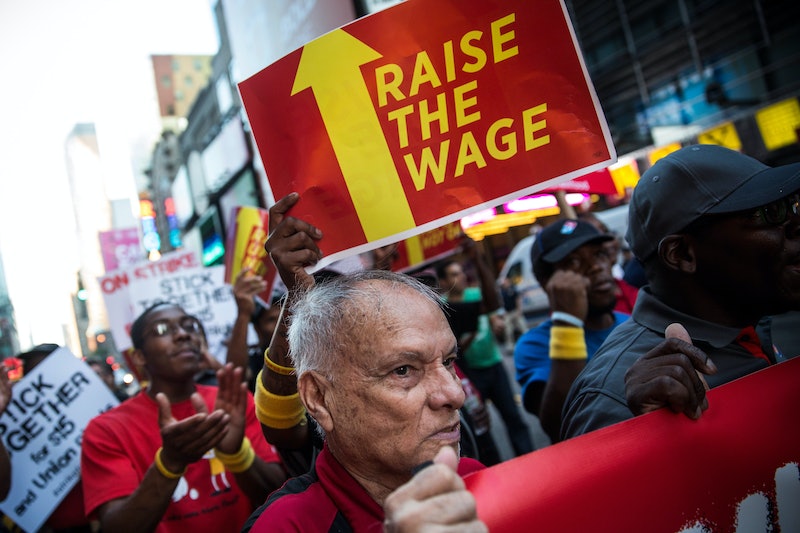 In a Thursday op-ed for The New York Times, New York Gov. Andrew Cuomo wrote that he will make a harder move to close the fast food industry wage gap so that workers are no longer trying to get by on a "bare subsistence level." He wrote that he will direct the labor commissioner to convene a wage board that will decide whether wages in the fast food industry sufficiently provide for the "life and health" of its workers. If wages aren't sufficient, the board will recommend what wages should be. The recommendation will not be subject to legislative approval, according to the Times op-ed.

Cuomo wrote that the answer to the wage gap isn't to pull the top down, but, rather, to lift up the bottom. In 2013, Cuomo said he raised New York's minimum wage from $7.25 to $8.50, and he plans to raise it again to $9 by the end of the year. In the op-ed, he said he proposed raising it to $11.50 in the city and $10.50 across the rest of the state, but the proposition was rejected by the legislature. Thus, he's accessing a state law that will allow a board to examine wages in the fast food industry and return with potential recommendations in three months, according to the Times. He compared the average fast-food worker's salary to the salary of a fast-food giant's CEO:

Nowhere is the income gap more extreme and obnoxious than in the fast-food industry. Fast-food C.E.O.s are among the highest-paid corporate executives. The average fast-food C.E.O. made $23.8 million in 2013, more than quadruple the average from 2000 (adjusting for inflation). Meanwhile, entry-level food-service workers in New York State earn, on average, $16,920 per year, which at a 40-hour week amounts to $8.50 an hour. Nationally, wages for fast-food workers have increased 0.3 percent since 2000 (again, adjusting for inflation).

He also noted that most fast food workers are not teenagers trying to make extra spending money like some would assume. In reality, 73 percent are women, 70 percent are over the age of 20, and more than 2/3 are raising a child and are the primary wage earners in their households, according to his op-ed. Tim Worstall, a contributor for Forbes who admitted to being a former CEO in the fast food business, is one of the many people against raising the minimum wage. Worstall says that there are actually far fewer CEOs earning the above sum than Cuomo would like people to think. He alleges that there are more CEOs of smaller fast food firms than of larger firms, which would actually drive the average fast food CEO salary down—accounting for the "Mom and Pop delis." Despite this truth, he doesn't contest the fact that CEOs of larger fast food chains are making the amount Cuomo listed, and the gap between them and their workers is also a reality.

A few of the more common critiques, according to the Times, are that Cuomo is arbitrarily placing demands on only one industry that doesn't pay workers sufficiently when there are dozens of others that commit the same harm. Melissa Fleischut, president and chief executive of the New York State Restaurant Association, told the Times:

Singling out a sector of one industry to have a higher minimum wage than all other occupations is unfair and arbitrary. The minimum wage is rightfully set by the Legislature and should affect all businesses equally.

When Cuomo announces his call for a fast food wage board on Thursday, he is expected to be joined by leaders in the Fight for $15 campaign to raise the minimum wage. Both Seattle and San Francisco have already passed $15 minimum wage laws, according to The Guardian, and proponents think New York is next. Cuomo also said that public assistance spending per fast-food worker in New York is $6,700 a year — a "$700 million annual cost to taxpayers." Flavia Cabral, a 53-year-old woman who works at McDonald's, said told The Guardian that she is representative of the female fast-food worker trying and failing to feed her family on her current wage. She told The Guardian she relies on food stamps to feed her two children and wants a "fair shot" at being part of the middle class:

Today, Governor Cuomo heard us – and soon, I know we’re going to get to $15. I am inspired today because $15 an hour would completely change my family’s life.

More like this
This Is When Netflix Is Going To Start Charging You For Sharing Passwords
By Darshita Goyal
Twitter Has *A Lot* To Say About The "Single Penalty”
By Sam Ramsden
Watch Jacinda Arden’s Devastatingly Honest Resignation Speech
By Sam Ramsden
What The UK Blocking Scotland’s Gender Recognition Bill Means
By Sam Ramsden
Get Even More From Bustle — Sign Up For The Newsletter
From hair trends to relationship advice, our daily newsletter has everything you need to sound like a person who’s on TikTok, even if you aren’t.