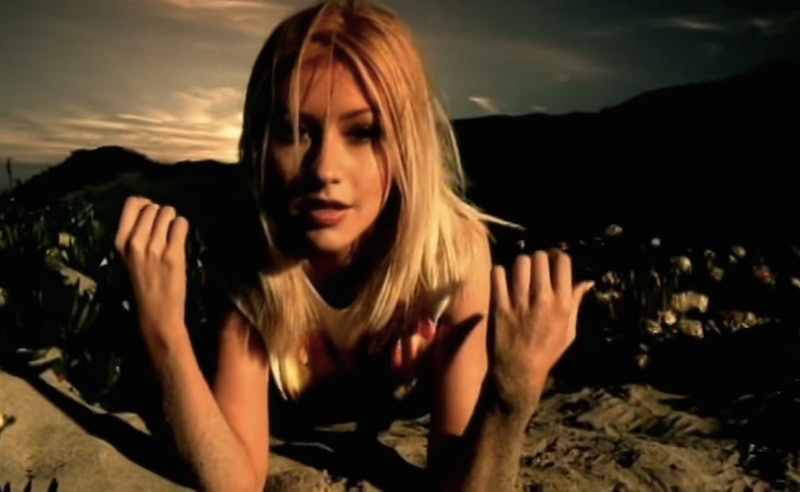 There comes a point when we must all ask ourselves: As the sweet, '90s children we are, what do we know of nostalgia? And then, there comes a point where we must answer the question: Everything. The answer is everything. For instance: We certainly know Christina Aguilera's first single "Genie in a Bottle," which was released in '99, was a masterpiece of musical achievement. The song — which was either about sex or self respect, depending on who you asked — was the anthem of the summer 1999. It was also the song our parents wouldn't let us play in the car. (So unfair.)

"Genie in a Bottle" signaled Aguilera had arrived, and was ready to battle Britney Spears for title of true "pop princess," with her edgier lyrics and soulful voice. For that reason, the song will always hold a special place in the hearts of many '90s children, including my own.

However, that does not mean we remember everything about our former favorite song. Even though some of us may still remember all of the words to "Genie in a Bottle" (and could probably throw together a decent impromptu dance number with our friends based off of Aguilera's pop tune — you know, if we tried), there are a few things we have forgotten about the hit song. Just like Aguilera has moved on to The Voice and country music, we too have expanded our musical horizons, so it's not totally unbelivable that we'd forget at least a bit about "Genie in a Bottle," and old-school Xtina. When was the last time you really watched the video or thought about the lyrics?

It's probably been way too long. So, on that note, let's take a look at all of the cool stuff you forgot about "Genie in a Bottle" — for old time's sake.

Crop tops are totally a thing again, and I think we can retroactively blame the "Genie in the Bottle" video. Aguilera wears four different crop tops (and a cropped jean jacket for good measure) in the video.

2. The Song Is Actually Empowering

No matter what our parents thought, "Genie in a Bottle" is all about empowerment. Aguilera sings: "You're lickin' your lips/And blowing kisses my way/But that don't mean I'm gonna give it away." Yes, the overall theme is sexual, but it's all about making the choices that are right for you.

3. Aguilera Was Only 18 When It Was Released

Yes, she was basically a child. So were the rest of us. Cue existential crisis in one...two...three...

4. Josh Duhamel Is in the Video

It's a blink and you will miss him cameo, but the future Mr. Fergie takes a leap over a porch railing at the 2:35 mark. Apparently, he told this story to his future wife before they got married. Excellent wooing tactics, Duhamel.

5. This Guy Never Got Famous

All of our bodies, including Aguilera's, were saying "let's go," but this sexy guy who starred as "the one who could rub it the right way" never made it big anywhere but inside our teenage fantasies.

6. There Was Totally a Dance That Went With the Song

You probably made up your own choreography, but "Genie in a Bottle" came complete with high school dance ready moves. A touch of belly dancing experience and some genie wish-granting is all it takes to master this number.

"Genie in a Bottle" is still everything that was so good about '90s pop music. If you haven't listened to the song in awhile, then prepare yourself before you hit play. Not only does it still hold up, you will not want to listen to anything else for the rest of the day.