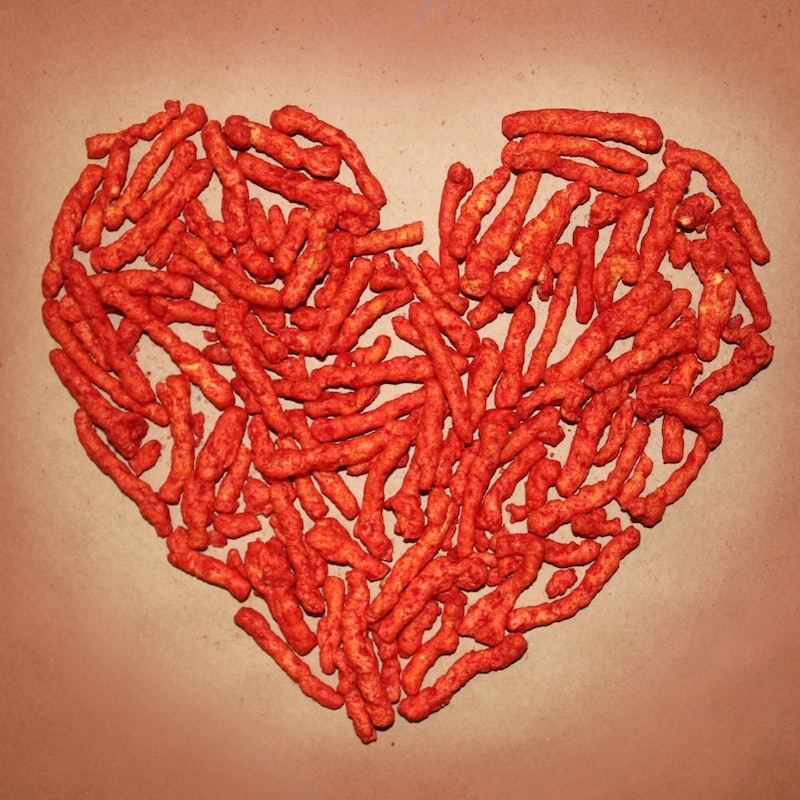 Because apparently we can't go more than a couple of days without hearing about some new fast food creation, here's today's little tidbit: It seems that Carl's Jr. is testing a Flamin' Hot Cheetos Thickburger at the moment. Hitherto, the fast food chain most known for its snack food/entrée mashups has been, of course, Taco Bell — but apparently they're not the only ones with their hands in the Frito-Lay pie. Iiiiiiiiinteresting.

What do we know about the Flamin' Hot Cheetos Thickburger? Not much. Details are so scarce that they're pretty much limited to what we've been able to glean from the photo of the burger that's currently floating around social media. The placard describes it simply as arriving “with Crunchy Flamin' Hot Cheetos and cheddar cheese sauce” — which, to be honest, kind of just makes me wonder why so many fast food places like to stick nacho cheese on top of their sandwiches. I mean, actual cheese is obviously far superior, so what gives?

But I digress. In addition to the verbiage, we can also draw a few conclusions from the picture of the burger — although we should probably be careful about making any definitive statements for the time being. From what I can see, the Flamin' Hot Cheetos Thickburger also comes adorned with lettuce and tomato (naturally — they're standard burger toppings, after all)…and possibly a slice of what looks like pepper Jack cheese. I could be wrong about the type, of course; if they're going for a spicy burger, though, pepper Jack is a logical choice. Here, take a look:

We also don't know much about where you can get the Flamin' Hot Cheetos Thickburger right now. Food Beast reports that it seems to be available at some L.A.-area Carl's Jr. locations, but we don't have any more details than that; furthermore, we don't know whether Carl's Jr.'s sister chain, Hardee's, has it on the menu yet either. I'm speculating here, so don't take what I'm about to say as fact — but I suspect that right now, the Flamin' Hot Cheetos Thickburger is only available at a handful of Southern California Carl's Jr. restaurants. If it gets past the testing phase, then it will probably make its way to Hardee's; the menus are pretty much identical, so it's relatively safe to assume that what one restaurant gets, the other will get as well.

I'll keep my ear to the ground; if any further information pops up, I'll be sure to pass it along. Weird fast food is just so strangely fascinating, is it not?