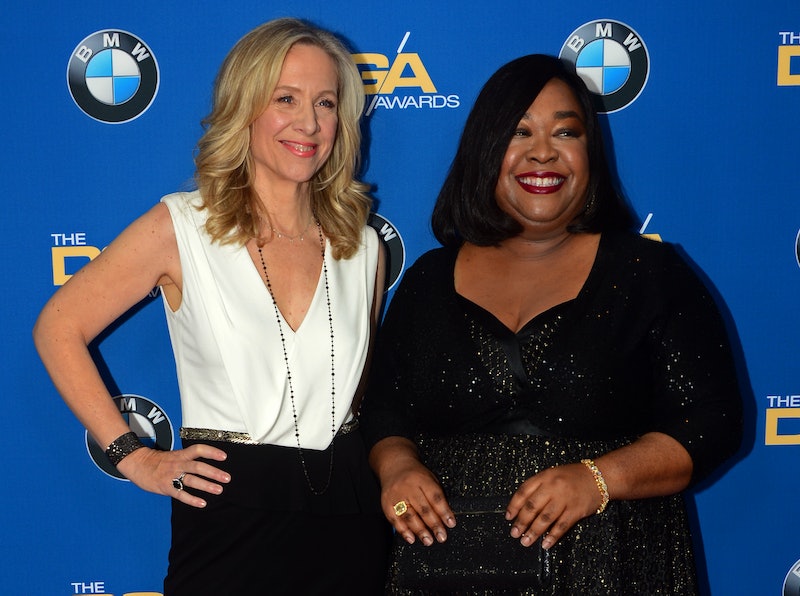 When, on Thursday night, it was announced that ABC had ordered The Catch , a new drama starring Mirelle Enos as a fraud investigator, most people had just one reaction: Shonda Rhimes has done it again. After all, the thriller is produced by Rhimes' company, Shondaland, which means that she's the person responsible for bringing it, plus Grey's, Scandal, HTGAWM, and that upcoming adaptation of The Warmth of Other Suns, to the air. Doesn't it?

Not quite. While Rhimes is certainly an integral part of helping those shows get seen, she's far from the only force behind Shondaland. Grey's Anatomy and Scandal (plus the now-cancelled Private Practice and Off the Map) are the only shows under the banner that she actually created and developed herself; the rest list her as a producer, but have other people making, writing, and directing the shows. Or, as Rhimes tweeted Thursday night after the news of The Catch had broken and fans rushed to her page to express their excitement: "I don't have a new show. #Shondaland does."

So who are the other people responsible for bringing us these addicting shows? Get to know the five people helping Shonda Rhimes take over TV:

Beers, Rhimes' Shondaland partner, has been the showrunner's right-hand woman since the very beginning. She's worked on Grey's since its premiere in 2005 as an executive producer, a gig that's earned her several nominations for the Producers Guild of America's Television Producer of the Year. In 2009, she joined Shondaland officially, and ever since, she's been a major force behind Scandal, HTGAWM, and all of the company's new shows, including The Catch.

Although Rhimes may be the better-known half of the team, Beers is no wallflower; in October, she gave a speech at a Marie Claire luncheon honoring powerful women in which she recalled defending Meredith Grey sleeping with a stranger in the Grey's premiere to a doubtful ABC executive. "I could no longer be grateful or just say yes, or hold my f---ing tongue... Meredith and Cristina and the other characters continued to have sex in on-call rooms for years to come."

Beers has also had a successful career in film, helping develop movies such as High Fidelity, The Hoax, and Best Laid Plans.

Nrwalk is a true Rhimes protegé — he started as a writer on Grey's, became a story editor, then a producer, then an executive producer of Scandal, and then, finally, the creator of How to Get Away with Murder. The hit show is completely under his control, as he's the showrunner, producer, and writer of several episodes. Rhimes and Beers are executive producers, but as far as making HTGAWM the crazy, addictive series it is, all credit goes to Nowalk.

Even if you don't know her name, you're probably familiar with Schurr's work; she's been a part of a half-dozen shows over the years, from Hannibal to Hellcats to Big Love to Army Wives. Now, she's the force behind The Catch (pictured), Shondaland's newest drama. Schur will produce and write for the series, set to premiere later this year.

HTGAWM fans might recognize Verica as Sam Keating (or as Jack from American Dreams), but the actor's biggest roles are actually behind-the-scenes. He's an executive producer of Scandal and has directed several of its episodes (including the acclaimed recent installment, "The Lawn Chair"), as well as ones for Grey's and Private Practice.

And then there's Debbie Allen, the legendary actress, dancer, choreographer, and, now, director and producer. Allen, best known to Grey's fans as Dr. Catherine Avery, just signed on as an executive producer of the show's upcoming 12th season. She'll also direct several episodes, adding onto the seven, plus the hours of Scandal, HTGAWM, Empire and Jane the Virgin, among other shows, that she's already done. No TV maker is quite as busy as Rhimes, but Allen seems like she's set on giving her boss a run for her money.