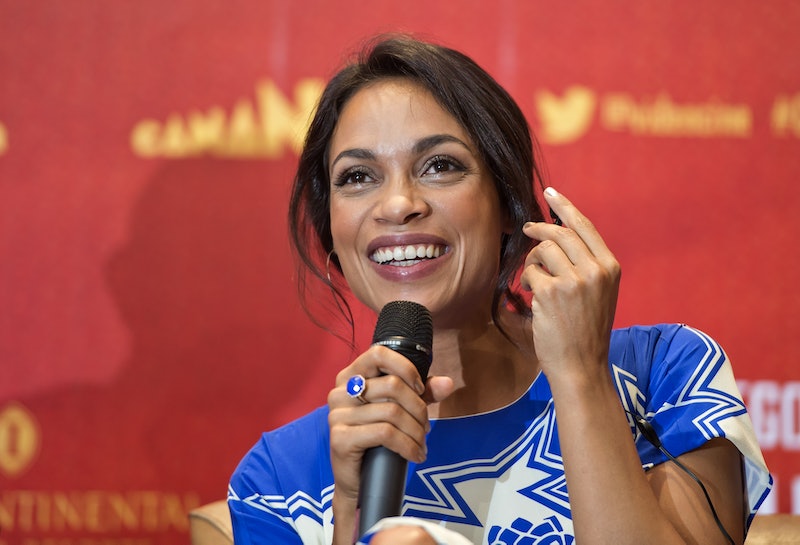 Daredevil fans, gather around. I bring joyous news from the mount of entertainment news! It has been officially announced that we will be seeing more of Rosario Dawson in Netflix's second season of Daredevil as Claire Temple. For anyone not in the loop, Dawson guest starred for five episodes of the critically acclaimed Netflix series that follows Marvel hero Charlie Cox (a.k.a. "Daredevil"). The series is canonically tied to the Marvel Comic Universe, and Dawson made quite a large splash in the first season. Fans fell in love with Claire immediately, the no-nonsense nurse that keeps Charlie Cox in good health.

The reputation of the Marvel Comics Universe for creating resonant, believable, respectable female characters isn't exactly in the best shape right now. The Internet is particularly on fire right now over the lack of a solo movie for Scarlett Johansson's "Black Widow" character from the Avengers films — director Joss Whedon even quit Twitter this week in a move that was immediately rumored to be in response to the backlash. (It wasn't.) Imagine how refreshing it was, then, when Daredevil introduced not one, but THREE female characters, who each had intriguing backstories and complicated emotional lives. Claire was an especially welcome breath of fresh air for the franchise, bringing a wonderfully realistic perspective to the whole Marvel universe.

While we still don't have that Black Widow movie, Claire's return comes as good news to those of us who are losing hope in whether or not Marvel is even interested in pursuing female characters in a serious manner. Here are seven reasons why Claire returning to Daredevil is a very, very good thing.

Claire's rational world view, self-possession, and practicality make her a refreshing and necessary addition to the MCU.

Claire's Not Really A Love Interest, But She Is Charlie Cox's Emotional Rock

Sure, there's definitely some romantic tension, but Claire made it very clear at the end of Season 1 that she has no interest in a relationship with a self-made martyr. Yet, Claire sees Charlie for what he is — a deeply flawed human driven by a complicated morality — and builds a camaraderie with him anyway. She keeps him strong, but sacrifices none of her own strength in the process.

Charlie gets his butt kicked a fair amount in Daredevil. After all, he may have heightened senses, but he's still just a regular old human. I'm afraid, if Claire wasn't on the series, then Charlie might actually die. Like, without Claire, we'd have two episodes until he gets the crap beaten out of him in an unbelievably well-shot fight sequence, then — since the questionable legal nature of his night life means he can't go to a hospital — he'd presumably just have to go home and die in his sleep and the rest of the season would be everyone mourning his death. We need Claire.

The Chemistry Between Claire And Charlie

Claire is so much more than a pretty romantic interest; she's smart, passionate, emotionally mature, and quite a kick ass character in her own right. Having said that, WHEN THEY KISSED IT WAS LIKE MAGIC AND I WANT MORE!!

Rosario Dawson Is Really Funny In The Role

Claire's got a shrewd sense of humor, and Dawson pulls it off with delightfully sardonic charm.

No, But Really, Claire's Perspective On The MCU Is Hilarious

All these superhero wannabes keep dragging drama into her life and she's just like, "Could you not? I've got work in the morning."

Most Importantly, Rosario Dawson Is A Goddess That Should Be In Everything

I am firmly of the belief that what's good for Rosario Dawson is good for humanity. She brings such a ferocious warmth to her characters, and it's no surprise that Claire was an immediate fan favorite. She should be in everything, and, thanks to this show's place in the MCU, she very will might be. Dawson's return to the second season could also mean we'll be seeing her on the big screen in the movies that tie to the series.