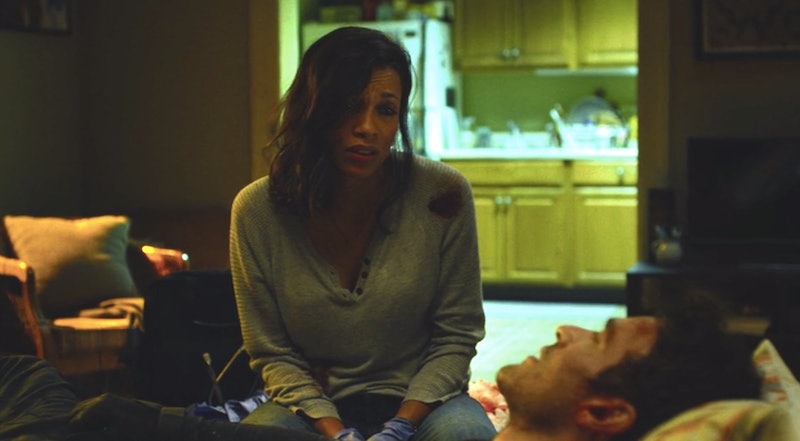 There is plenty to love about Netflix's Daredevil , the latest property from the Marvel Cinematic Universe's assembly line: the terrific performances by stars Charlie Cox and Vincent D'Onofrio; the dark and violent tone, more down-to-earth than most of the candy-colored Marvel universe; the bone-crunching fight choreography; and the expert direction, as evidenced most spectacularly in that three-minute single-take hallway fight scene (recently dubbed "the greatest fight scene in TV history" by USA Today). But the show's trio of strong women are definitely high on the list, so I can't help but wonder... What will Claire Temple and the women of Daredevil be up to in Season 2?

The MCU is great at a lot of things — inter-franchise continuity, eye-popping spectacle, Robert Downey, Jr. being Robert Downey, Jr. — but complex female characters hasn't really been one of them. For every kickass woman (Captain America's Peggy Carter, Guardians Of The Galaxy's Gamora) there's a hapless love interest (Iron Man's Pepper Potts, Thor's Jane Foster). Even the franchise's best female character, Scarlett Johansson's Black Widow, has been denied her own solo movie despite overwhelming interest from the MCU's fans

So it was refreshing to see Netflix provide us with not one, not two, but three interesting, varied, capable women. There's Deborah Ann Woll's intrepid secretary/investigator Karen Page; Rosario Dawson's skillful nurse Claire Temple; and Ayelet Zurer's intriguing gallery owner Vanessa Marianna. What's next for these women? Let's look at the comic books for clues:

Where she left off: Her partner-in-investigation, Ben Urich, was killed by villain Wilson Fisk, leaving Karen devastated. However, the end of Season 1 saw her celebrating with Matt and Foggy after Wilson's apprehension by Daredevil (whose identity she's still unaware of). There were hints of a deeper backstory when Karen killed Wilson's right-hand-man: "Do you really think this is the first time I've shot someone?" she asked Wesley before putting eight bullets in him.

What's next for her: Despite what seemed like an unlikely budding romance between Karen and Foggy in Season 1, on the page, Karen is the longest-running love interest of Daredevil himself — so expect more flirtation between her and Matt next season. As for that mysterious backstory, it might have something to do with her father, Dr. Paxton Page, who in the comics becomes the villain Death's-Head. Many viewers have wondered when Karen will learn Daredevil's true identity — in the comics, Matt reveals himself to her after defeating her evil father. Ultimately, she's murdered by Daredevil's arch-nemesis Bullseye... so fans clamoring to see that character introduced on the show should maybe think twice.

Since Urich, a significant supporting player in the comics, was killed much sooner than anyone expected, it's possible that Karen will also adopt some of his role, after spending much of Season 1 under his tutelage. This is especially interesting, since Urich had a major role in the Civil War storyline, serving as an embedded journalist on Iron Man's side of the conflict. If Season 2 of Daredevil premieres around the same time next year, it will be exactly one month before the release of Captain America: Civil War — will Netflix's show somehow lead up to the events of that film?

Where she left off: I think we can all agree that, as amazing as Daredevil Season 1 was, it could have used a lot more Claire. Rosario Dawson was so outstanding in the role, and her chemistry with Charlie Cox was off the charts. In a show full of superpowers and super-egos, she brought a relatable levelheadedness — to to mention logic — to Matt Murdock's crazy world. She made a lasting impression... and she only appeared in five of the season's 13 episodes!

The last time we saw her, she was stitching up Matt — again — and advising him to get a protective suit. She makes it clear that she's not interesting in pursuing a relationship with someone who so clearly wants to martyr himself. Her honesty is refreshing; like when she says to him, "At least I got to see you with your shirt off again." Amen, sister.

What's next for her: Netflix's version of Claire is an amalgamation of "Claire Temple" from the Luke Cage series and the "Night Nurse" (aka Linda Carter) from the Daredevil series, which means that we actually might see her again before Season 2 of Daredevil rolls around next year. In the comics, Claire Temple is a love interest of Luke Cage, so don't be shocked to see her pop up in an even bigger role in that upcoming series, starring The Good Wife 's Mike Colter.

There's potential to see her in the Iron Fist series as well, the last of Marvel's Netflix shows to premiere before they all combine for The Defenders. Rumor has it that Benedict Cumberbatch's Doctor Strange will make his debut in Iron Fist ahead of his own feature film; Night Nurse and Doctor Strange teamed up for a five-issue miniseries — and were even romantically linked for a time — so it's possible Dawson could put in an appearance in that series as well, as sort of the human connective tissue between all of Netflix's superhero shows.

When Daredevil Season 2 does roll around, Claire could have a lot to do with a character fans have been longing to see on the show. In the Dark Reign miniseries, Night Nurse takes care of a severely injured Elektra after Foggy Nelson finds the assassin on the floor of their law offices. The two women bond, with Elektra showing uncharacteristic concern for Night Nurse's wellbeing.

Where she left off: The enigmatic art expert was quickly enamored by Wilson and saw great promise in his plan for the city. The crime lord's fumbled attempts are romance were one of the best parts of the season, including his hasty proposal as he was being led away in handcuffs by the FBI in the finale. Of course, being a supervillain, Fisk had a plan to escape, and had a helicopter waiting to take both him and Vanessa out of the city. But after Daredevil foiled those plans, Vanessa was forced to leave without him.

What's next for her: Comic fans know that, before long, Vanessa Marianna will become Vanessa Fisk. On the page, she's much less supportive of her husband's illegal activities than she currently seems to be on the show. In fact, she demands that he quit his life of crime, and the two retire to Japan. (Of course, that retirement doesn't last long.) Wilson's associates, angry at Vanessa for luring him away, target her for assassination (much like how Owlsley had her poisoned this season). She survives the attempt, but is forever changed — physically and mentally.

Wilson and Vanessa have a son, Richard; when he tries to have his father killed, Vanessa is forced to brutally murder her own son. This act takes a great toll on the already-ailing woman, who uses her last dying days to try to manipulate Wilson and Matt Murdock into killing each other. The plan fails, but Fisk is devastated when Vanessa passes away, and Daredevil is able to leverage his emotions to get him to leave the country for good.

It will be interesting to see if the two versions of Vanessa grow even more different in Season 2... or more similar. Will the future Mrs. Fisk continue to support her husband's criminal enterprises a la Lady Macbeth? Or will she slowly turn against her husband and the atrocities he commits? We'll find out in April 2016!

More like this
Here’s When 'She-Hulk' Takes Place In The MCU
By Brad Witter
Everything To Know About 'Evil' Season 4
By Meguire Hennes
Does 'Locke & Key’s Ending Mean There Could Be A Season 4?
By Sophia Moore
‘The Simpsons’ Will *Finally* Address How They “Predict The Future”
By Sam Ramsden
Get Even More From Bustle — Sign Up For The Newsletter