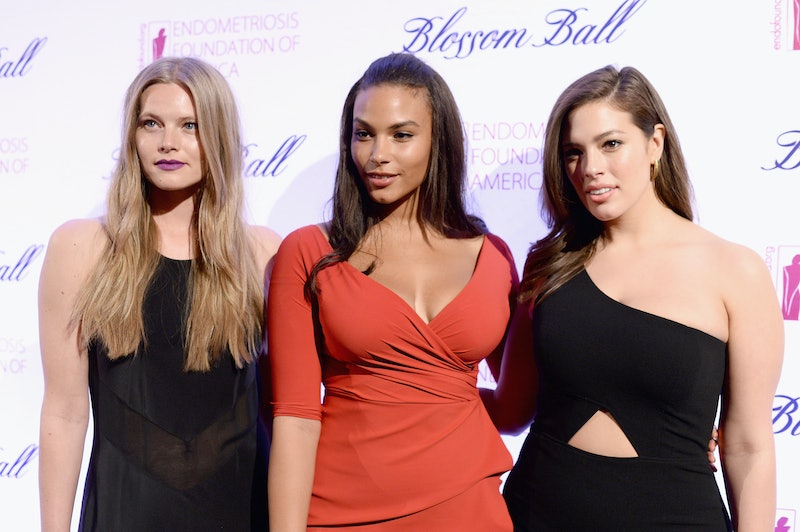 Discussions about body positivity, visible diversity, and how fashion excludes plus-size customers seem to be at an all-time high; but that's not always a positive thing for plus-size models. The added attention is considered a "win" by most, but it's also exposed some of the ignorance that still exists around the issues — and there seem to be some questions plus size models always get asked.

While many of these plus-size models are becoming household names and their faces are being splashed on subways and featured in controversial commercials, they're still noticing a lack of nuance in the discussion about the plus-size fashion industry. From being asked if modeling is their full time job to what they do to keep in shape, and whether they have "ever considered being 'skinny,'" there's more than a handful of disrespectful questions these models say they'd like to never hear again.

Model Felicity Hayward hates being asked if she's experienced any negativity because of her size. "The more people keep asking those questions, the less we’re going to be able to be equal," she told Glamour.

Their wish? That they were given more of an opportunity to speak to things other than their weight or body size — like why department stores don't carry a wider range of sizes as "standard," how they can impart media literacy on young girls, and the why there aren't more sexy and glamorous images of plus-size women. While Georgia Pratt says that she enjoys being included in the conversations, she wishes that they were "opened up," and that the onus to create change in the industry was placed on designers and other tastemakers who have more control over the industry.

Justine Legault says that she just wants to be humanized: "At this point, I’m trying to have people get to know me as a person — that's where I’m at in my career." Treating humans like humans and not as spokespeople for an entire group or movement: Doesn't that sound good to you?

Hopefully, as the conversations continue, they will evolve and the real issues around being plus-size in the fashion industry (and the world) will be centered. After all, aren't you sick of hearing about how much a model — no matter her size — weighs? Me too.