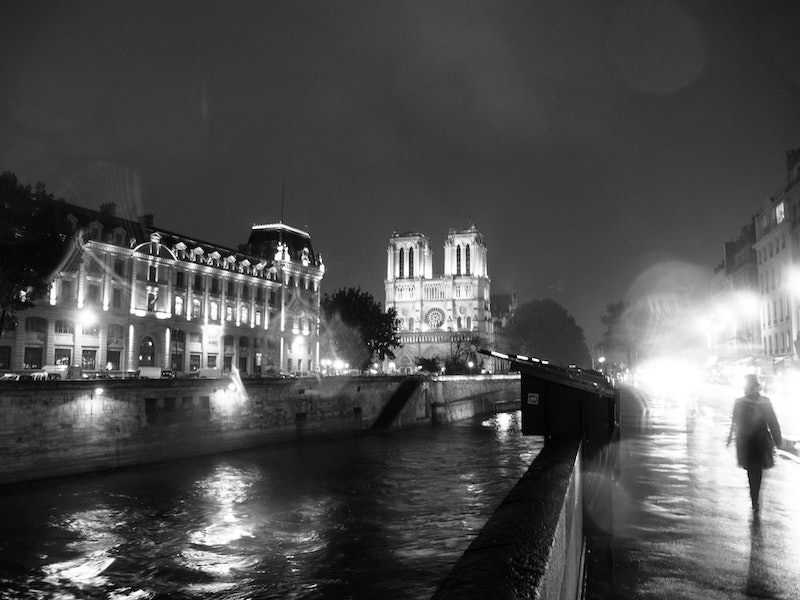 Paris is a legendary hotspot for artists and writers — it's been the home of countless great authors and has inspired literary works for readers of every sensibility. So if you're a writer, traveling there can feel like a holy pilgrimage. You consider it a given that you'll follow the footsteps of your literary idols, and that inspiration will await at every corner and cozy café.

A writer by trade and beginner photography enthusiast by hobby, I was HOLY BANANAS EXCITED to spend my 10-day trip there wandering around with my notebook and my Canon G12, determined to record everything I heard, saw, and felt. But like any experience, traveling Paris is what you make it — it's a real place, after all, not a stage set conjured into being for some sort of aspiring artist fairytale.

So, the idea that it would be a 24/7 inspirational free-for-all was definitely a bit of rose-colored thinking on my part. The trip was amazing and fulfilling but also oh-so-exhausting — sometimes so much so that being creative was the last thing on my mind. Though if inspiration is what you seek, there's no doubt that Paris offers infinite possibilities. If you're lucky enough to get there, here's how I recommend you get in the mood to get your write on:

Hang Out In the Reading Room at Shakespeare and Company

The legendary bookstore has been the epicenter of English-language literary life in Paris for close to a century, and luminaries from James Joyce to James Baldwin to Zadie Smith have hung out (or even slept) within its walls. To encourage literary pilgrims to sit and stay a while, the shop has established a cozy little library on the second floor. So, pull a volume off the shelf, grab your notebook, and spend a rainy afternoon channelling the spirit of your favorite author from the comfort of a squishy old chair — there's a good chance they've done the same thing in the exact same spot.

Take a Nighttime Stroll in the Rain

After hiding from the rain in the bookstore all day, when night falls it'll be time to get walking. The City of Light never lives up to its name more spectacularly than on rainy evenings, when the glow from its golden street lamps and floodlit buildings reflects off every wet surface — the air itself seems to be made of shimmering droplets of light. My solitary evening wanders beneath an umbrella were the most transporting moments of my entire trip, and I'll forever be searching for the exact right words to capture the moody beauty I saw and the feelings it evoked.

Take a (Note)Book to the Park (Which Park? Take Your Pick)

Reading is the ultimate way to get inspired, and what better setting than one of Paris's beautiful parks? If gorgeously manicured gardens are your thing you can head to the famous Jardin du Luxembourg. Another option is the more rugged Parc des Buttes-Chaumont (pictured above), beloved by locals for its stunning hilltop views and an off-the-beaten-path location that puts it out of the way of many tourists. Parks are also great places for people watching, so be sure to take that notebook.

People-Watch at an Upscale Lounge

People-watching is one of the best parts of spending time in a new place, and it's especially important for writers. Paris is notorious for the cosmopolitan sophistication of its inhabitants, so spending some time someplace très chic is a great way to get a taste of the city's particular brand of aspirational cool. After a long evening walk I plopped down for a late-night glass (or two) of wine at Le Fumoir, a popular restaurant and lounge that sits directly across from the Louvre and that, incidentally, has a reading room in back. I think my solo status and disheveled appearance made me a bit of an oddity amid the smartly dressed scenesters that flock to the place after dark, but I had my eyes and ears to keep me entertained and my notebook to keep me busy. If you have a sense of purpose (also: wine), you'll never feel out of place.

If you are a creative type living in a U.S. city, you probably spend a lot of time hanging where the hipsters are. So grungy-cool bars and third wave coffee shops may not seem like novel vacation activities, but I found that hanging out around people who are almost — but not quite — like the ones from my Brooklyn neighborhood was a fantastic way to pick up on subtle cultural differences, which is exactly what you want to do as a writer.

Like, for example: Sooooo many hot baristas, you guys. Like, so many. I'm pretty sure being spectacularly attractive is a prerequisite to working an espresso machine in Paris.

ANYWAY. If you're looking for the trendy young things, Canal St. Martin (pictured above), Oberkampf, and Belleville are the neighborhoods where they tend to be found.

I think that one of the most inspiring things you can do as a writer is explore the work of artists and storytellers in a medium other than your own. Paris has no shortage of masterpiece-laden museums, but if you only have time for one I'd skip the Louvre and head for the small but incomparable Musée de L'Orangerie. The main attractions are the two circular white rooms that house several of Monet's panoramic water lily panels, which Owen Wilson and Rachel McAdams toured in Midnight in Paris . The impact of walking into this 360-degree explosion of color, which was mounted and lit according to the artist's exact specifications, is indescribable. It's a testament to the pure emotional force of beauty and creative imagination, which is something that the Mona Lisa, with all her mysterious charm, doesn't quite pull off.

Wander Through the Installations at the Palais de Tokyo

If you have time for two museums, I'd again skip the Louvre (sorry, Mona Lisa) for something on the opposite end of the artistic spectrum. The Palais de Tokyo has no permanent collection, and it's also not technically a museum. Rather, the space hosts a constantly changing series of contemporary exhibitions, some of which feature the work of a single artist, and others in which a single theme is explored by several creators. Most of the work is site specific and a great deal of it is multimedia, so moving from one section to the next can feel like traveling between worlds.

I went on my last day in Paris and within 10 minutes I was kicking myself for not going sooner — I could have spent a whole day (or several) wandering though the thought-provoking, wildly imaginative installations, but I only had 90 minutes. But even in that short time I jotted down pages worth of ideas and observations, and the place expanded my concept of what art can be. If (I mean... WHEN) I go back to Paris, it will be the first culture spot I revisit.

Sit in Quiet Contemplation at One of the City's Gorgeous Cathedrals

I'm not a remotely religious person, but my love of grand-scale architecture has attracted me to Europe's cathedrals ever since visiting Rome when I was 14. And despite my lack of spiritual belief, their vast, geometric interiors always put me in a particularly reflective mood. The great European churches carry the weight of history and attract seekers from all over the world — they're emotionally and existentially potent spaces, and are some of my favorite places to write, because they take my mind in directions it doesn't regularly go. I spent a good 45 minutes with my notebook sitting in the back of the Sacré-Cœur (above) and midway through my reverie a choir of nuns began to sing for the 6 p.m. service. Even for a non-believer, hearing those beautiful female voices fill the cavernous space was quite a transporting experience.

OK, this has nothing to do with writing, but you're in Paris — you need the sensual along with the spiritual. And they're just sooooo pretty.

More like this
Where Was 'The Bachelorette' Season 19 Filmed? More European Destinations Are On The Way
By Radhika Menon
10 Breathable Bedsheets To Keep You Cool During The Heatwave
By Orla Pentelow and Sophie McEvoy
15 Genius Storage Solutions For Your Next Bathroom Refresh
By Emma Garza
The 4 Most Forgiving Zodiac Signs
By Kristine Fellizar
Get Even More From Bustle — Sign Up For The Newsletter