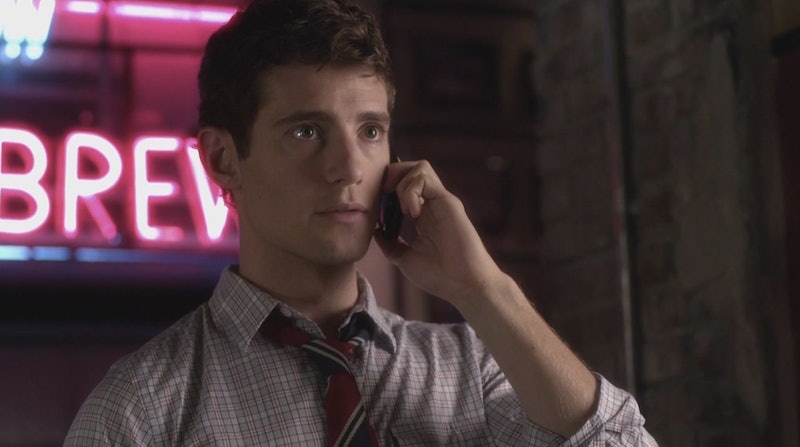 As the struggle to make sense of the whole "Charles Is A" thing on Pretty Little Liars continues, it's time to turn back to previous episodes on the hunt for clues. Supposedly, PLL has been dropping little hints about this bigger mystery since the very beginning, and Charles clues started coming into play at the beginning of Season 3. Naturally, that means we should also check out subsequent seasons, like Season 4 which saw the return of Ali to Rosewood; really, all of the great episodes leading up to that big reveal at the end of the season are worth combing over. But a little bang for your buck comes in the form of the clues riddled throughout Season 4 episode, "The Mirror Has Three Faces" — an episode that saw not only Wren, but Radley and Red Coat, too.

"The Mirror Has Three Faces" is Episode 11 of Season 4, so some stuff has gone down in the episode prior: A crashed a car into Emily's house, because of course he did; Mona is locked up in Radley for confessing to Darren Wilden's murder and Wren is her psychiatrist; Hanna's mom, Ashley, is also a suspect in the Wilden case, so she's under house arrest with an ankle monitor and it's bumming the Marins out. Elsewhere, Aria and Ezra are on the rocks; Emily and Paige are on the rocks; and Mrs. DiLaurentis is all kinds of creepy.

Now that we've got the recap out of the way, here's what you really need to pay close attention to in this Season 4 whopper of an episode:

Wren Is Up To Something

Oh, Wren. I just can't figure him out. Is he good, is he bad? What does he want with the Liars? Not to mention that in the future, he winds up engaged — again — to Melissa.

Now we find him working at Radley, but I think it's safe to say he's kinda a bad doctor. He can't even spell the word "diagnosis." It might just be the nerves from talking to an unhinged Mona, or we're being clued into the fact that Wren's not really a doctor.

Later on in the episode, he corners Mrs. Hastings and tells her about his sessions with Mona. Mrs. Hastings points out to Wren that he could lose his license since he's disclosing confidential patient information. However, he doesn't seem bothered by it at all. I know I've asked this before, but I'll ask it again: why don't we know anything about Wren's past? Supposedly, he studied at Oxford University, but we've never seen a paper degree, now have we? This "doctor thing" could be a huge charade for him to get close to someone in Rosewood.

OK, not only is be being incredibly weird and shady throughout the entire episode, it's implied that he drew this picture of a mom, a dad, and two kids on a farm. One could make the connection that the horse in the stable is Custard, the same horse that Mrs. DiLaurentis took Bethany Young to visit...

Also, we see this drawing first in black and white, and come the end of the episode Wren is coloring in the woman's jacket with a red pen. Red Coat, anyone?

I don't think this is implying that this woman is Red Coat, or even that Mrs. DiLaurentis has anything to do with Red Coat — I think this implicates that Wren knows about Red Coat. In all this Charles-is-A craziness, have we forgotten that we don't know the identity of Red Coat yet either? I might not know her identity. But it appears that Wren might.

He also makes a comment to Mrs. Hastings about being a part of their family. Yes, I know he's talking about his broken engagement to Melissa... but is he really?

No one is 100 percent certain about Charles' connection to a Rosewood family, but it's suggested (and I believe it) that Charles is Mrs. DiLaurentis' son. That wouldn't make him related to Mrs. Hastings, BUT, Mr. Hastings had an affair with Mrs. DiLaurentis, remember? Jason came out of that. And if it's thought that Jason and this Charles are twin brothers, in a strange and twisted way that does make everyone family. Just a thought. It's really an odd exchange, knowing what we know now about PLL and its family ties.

I think it might be too far to suggest that Wren is this missing DiLaurentis-Hastings child and Charles (after all, that would mean some weird, accidental half-sibling hanky panky between Wren and Melissa and Wren and Spencer — yikes), but honestly, he's related to someone in this Rosewood mix. I'll be OK as long as the answer isn't the two women he's been macking on on-and-off for a few seasons.

At one point, Emily picks up a pictures off a table. There's Mrs. DiLaurentis in the picture, and she's with a young, blonde girl. Is this Ali? Also, can't help but wonder, whose hand is that on the right side of the picture? It's also worth noting that red ball. After five seasons of PLL, I've learned that nothing is accidentally placed in a photograph. However, I do think the big takeaway from this image is simply "who's that girl, and also who was cut out of the picture?"

This picture might be nothing. But then the same image of the little girl shows up two more times through the episode. This isn't a throwaway detail. The picture that Emily holds and the other picture above all feature the same child, and obviously we're meant to assume right away that this little girl is Ali. But do we know that for certain? I'm a big believer in the fact that there might be another little DiLaurentis girl out there, and that's who we're actually seeing in this pictures. She looks like younger version of Ali... because she's related to Ali.

CeCe, like Wren, is one of those characters with a ton of loose ends. In "The Mirror Has Three Faces" we learn that she blames not only Ali, but Aria, Spencer, Hanna, and Emily for getting her kicked out of school. Clearly, she's got a vendetta against them, even though she's still helping Ali out.

But is this true? Does she really hate these girls for getting her kicked out, or did she simply hate them at this time in her life? The Liars really think she's a bad seed at first, but it turns out that's not really true. But then again, we can't really pick a side because we still know nothing about CeCe. We don't even know where she is in the country, and she's supposed to be overseas after fleeing the country.

Normally, I wouldn't think this scene was anything important. Ezra and Aria are on a "break" and Ezra gets some bad news (he learns that his old GF, Maggie, lied about the paternity of her son, Malcolm, and Ezra is not the dad! Remember when that was a plotline on PLL?).

Ezra tries calling Aria, and she ignores his call. He stares into his reflection in his bookcase. It's nothing, or is it something? This episode is called "The Mirror Has Three Faces" and here we've got Ezra with two faces. Could this be suggesting that somewhere out there, there's a third face for Ezra? Are there still parts of his history that we don't know — or maybe even a long lost sibling we might not know of? Granted this could all be leading up to his I-was-writing-a-murder-mystery-book-about-Alison reveal, but it could have more than one meaning.

Someone's Been Chilling In The DiLaurentis Basement

Red Coat has been squatting in the DiLaurentis' basement. That's not weird at all. But the weirdest thing about it is that Mrs. DiLaurentis isn't freaked out by it. She just shrugs it off, and heads back upstairs to make dinner, suggesting that the gardener will take care of it later.

Listen: If I had just learned that someone was living in my basement, I would be out of there so fast. That's not something you can just shrug off. It really seems like Mrs. D knew someone was in the basement. We've seen her hand off items (like clothing) to someone before — and it wasn't Ali, because she didn't know Ali was alive — so she had to have known about whoever was in the basement. There were also holes in the floor, so whoever was in the basement could hear what was going on upstairs. I don't think it was to spy on the DiLaurentis family, I think it was to spy on whatever the Liars were talking about. And Mrs. D knew, which is why she was so chill about learning that someone was hiding in her basement. Whoever Red Coat was back then/is now, they're always heavily invested in the Liars. Maybe Red Coat was worried that they were going to start piecing together important information, and needed to know what they had figured out. Falling even further into this hole, what happens if Mrs. DiLaurentis knew about Red Coat in the basement, and that's why she invited Emily into her home in the first place? It was all a trap.

So what does this all mean? I'm still a firm believer that Wren's up to something, and that he's always been up to something. How that connects to the greater mystery, I still don't know (but I'm determined to find out). Also, when you think about it, we really haven't seen Red Coat in a while. So what's up with her? Who is she, and why does she always bring trouble? What secrets does she know, and what's her connection to A, Charles, and the Liars? This episode certainly helps us figure out what to pay attention to, but the answers are still so unclear.

So excuse me for a bit, I've got a lot more PLL episodes to brush up on. Images: ABC Family/screengrabs (13)

More like this
A Is Officially Coming Back To Wreak More Havoc In 'PLL: Original Sin' Season 2
By Kadin Burnett
'House of The Dragon' Episode 6 Will Take Place A Decade After Episode 5
By Kadin Burnett
The ‘Emily In Paris’ Season 3 Release Date Is Here, Plus The First Footage
By Bustle Staff
The First Clip From Netflix’s Queen Charlotte ‘Bridgerton’ Prequel
By Bustle Editors
Get Even More From Bustle — Sign Up For The Newsletter