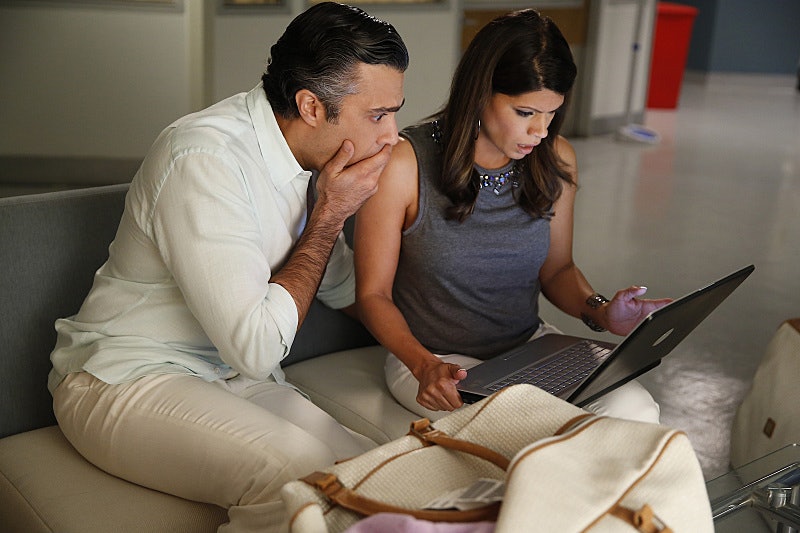 I knew it would be impossible for fans of Jane the Virgin to make it out of the Season 1 finale unscathed, but I did not adequately prepare myself for how troubling the final twist of the CW's first season would truly be. After Jane bathed in the afterglow of giving birth to her beautiful son Mateo, he was kidnapped by Sin Rostro. Yes, THE Sin Rostro, the evil drug kingpin who has been on the run, came back to snatch Jane's baby from the hospital. How's that for a major twist on a show that revels in scandalizing its audience on a weekly basis?

Jane was hesitant to hand off newborn Mateo to a new nurse to get tested for his hearing. And in a normal world, I could write that off as just new-mom jitters and would say she was just naturally overreacting. But Jane has a good gut and this is freakin' Jane the Virgin here! Of course, something terrible is going to happen! The "nurse" hid baby Mateo under her jacket and gave him to Sin Rostro, who was waiting outside of the hospital in a car.

Rose/Sin Rostro/Whatever you go by — you can mess with Rafael, Petra, Luisa, Nadine, and the staff at the Marbella all you want. But when you target Jane's baby, you cross a serious line. Now, as the show did not reveal Sin Rostro's face — and Nadine said Sin Rostro had allegedly gotten more plastic surgery done so she wouldn't look the same — I can't be 100 percent sure that it's actually Rose who stole Mateo. But as we saw what appeared to be a woman's legs get out of a car, the narrator told viewers that's what happened and he doesn't often lead us astray intentionally.

The only silver lining to this whole terrible incident is the fact that Michael has a lead on Rose in the form of Nadine. By sneakily tricking his ex-partner, ex-lover, secret Sin Rostro accomplice, and current fugitive, Michael is tracking her, so hopefully she can lead him to Sin Rostro AKA Rose sooner rather than later. I'm sure Rose kidnapped Mateo as a play against the Solano family (perhaps against her ex-lover Luisa) and I honestly think Mateo won't be away from his mother for too long. But fans will have to wait until Season 2 to know the fate of Jane's infant son.