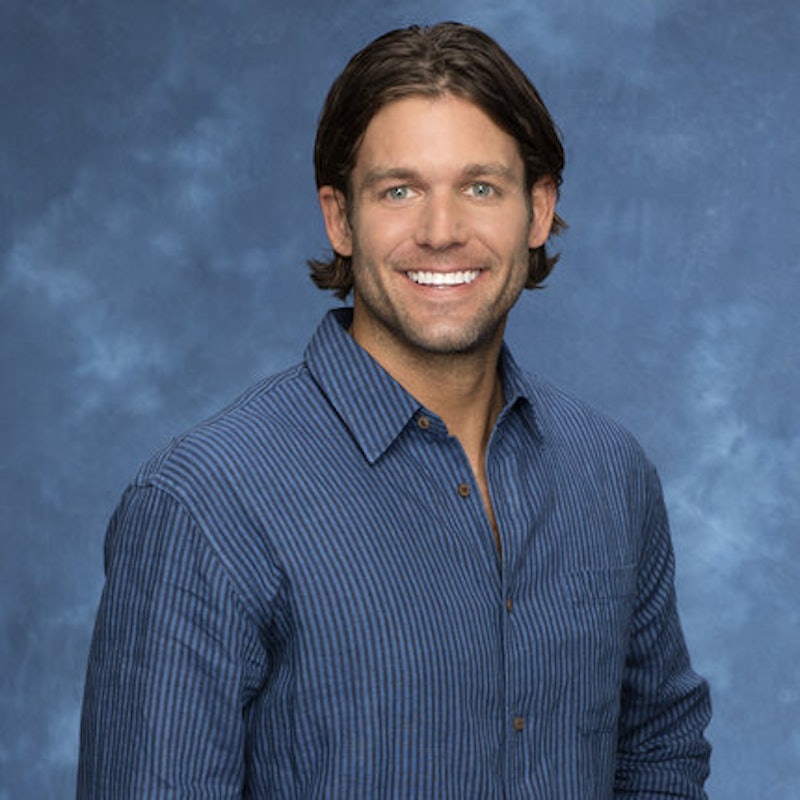 It's a longstanding tradition that at least half of the contestants on The Bachelor and The Bachelorette have to have ridiculous job titles, and the upcoming 2015 season of The Bachelorette definitely isn't about to disappoint us. While I'm pretty sure no Bach career will ever be as random (or as amazing) as the dog lover from Juan Pablo Galavis' season, this year's Bachelorette contestants are giving her a run for her money. This is where Tony comes in, one of the guys who is vying for Kaitlyn and/or Britt's heart this season. According to his ABC bio, Tony is a healer. I'm sorry, what? What does that mean? Is that like a doctor? Is he an acupuncturist? Is he the male equivalent of Dr. Quinn, Medicine Woman? What does Tony even do as a healer?

Finding the answer to that question was pretty easy, as I am a slave to Reality Steve and his many spoilers, but before that, let me properly introduce you to Tony. He's from St. Louis, he has blue eyes, and he lists Beetlejuice as one of his favorite movies — all promising characteristics. He likes romance and Iron Man and if you're into the long hair thing, this guy will totally be your type. And the healer job title? It's not as weird as it sounds. Tony's actually more of a physical therapist who's super into new-agey stuff.

Obviously, calling yourself a "healer" is going to mean different things to different people, but in Tony's case, he's a massage therapist and seems to believe that the best way to get rid of pain is through massage. Thanks to the website he links to on his Instagram, it seems Tony has his own business, Performance Pain Relief, and calls his talents "a true gift to your body," which sounds a lot like a pickup line we must have heard on The Bachelorette before. He also teaches massage classes at Missouri's Healing Arts Center, so Tony sounds like a pretty busy dude. He also sounds like the kind of guy who would get along with one of my favorite Friends cast members, Phoebe Buffay, and that's never a bad thing.

And if this is still too out there for you, studies have proven that massage therapy actually can be an effective solution to pain, so Tony could be onto something. Whether or not his philosophies will win over Britt or Kaitlyn is yet to be seen, but he definitely seems like an easygoing guy — a plus in the ABC-fueled pressure cooker that is the The Bachelorette.