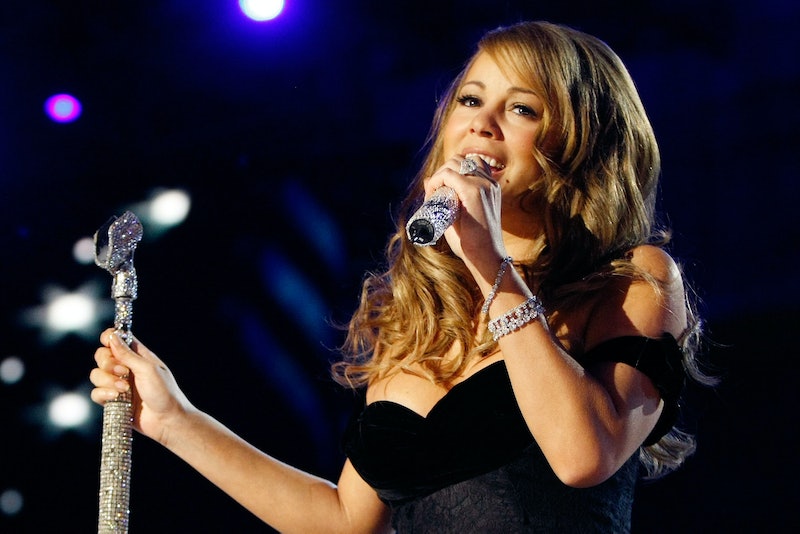 I don't know about you, but I was obsessed with Mariah Carey when I was a kid — and I do mean obsessed. I had every album on cassette tape, knew all the words to every song, and even convinced my 4th grade sign language club (yes, we had a sign language club at school) to learn "Hero" in ASL to perform at the Christmas concert. She is one of the ultimate singing divas of all times, so it's vaguely sad that her success has been somewhat stifled the past few years. Obviously she's still a total legend, but she's suffered with vocal problems lately and even had to cancel her show at Caesars Palace Las Vegas this week due to bronchitis. But whatever, guys! She's still a queen, and I will still sing along to her music until the day I die.

Every once in a while, when I'm feeling nostalgic for the '90s and the days of my youth, I'll pop on Music Box or, better yet, her MTV Unplugged album (that live version of "Someday" is impeccable) and just jam out. The great thing about Mariah's back catalog is that it totally holds up over time and is just as good today as it was back then. Seriously, try listening to one of her many #1 hits without singing along. I dare you.

Here are 7 Mariah Carey songs you know you still can sing by heart, despite how long ago they were released.

"Always Be My Baby"

Don't act like you don't sing this from beginning to end at the top of your lungs whenever you hear it. It goes on every '90s playlist and is totally one of the best songs of the decade of ANY genre, hands down. The video is a classic, too. This is Mimi at her height and I couldn't love this song more.

Even though when this song came out, you were likely still in elementary school and had no idea what it meant to be scorned in life, you probably still sang "Someday" with all the sass intended. After all, the one you gave away WILL be the only one you're wishing for, am I right? This song takes me so far back to my 8-year-old self, who thought she was gonna be a singer just as famous as Mariah one day.

Mariah was not only good at the uptempo stuff, but the ballads were killer, too. "Vision Of Love" was one of her earliest successes in this arena, and is another one that I know I used to sing with all the passion I could muster as a 7-year-old. "I had a vision of love, and it was all that you've given to meeeee!" So true, Mariah. So true.

Pretty sure "Hero" underscores inspiring scenes in movies and on TV around the world to this day, and for good reason: it's a real tear-jerker and celebrates the hero in all of us. Like I mentioned earlier, I still remember not only the words to this one, but how to do it in sign language. Priceless.

The only thing that had me feeling emotions in 1991 was when my next door neighbor — who was SUPPOSED to be my best friend — stole my Pillow Person and then lied and said I gave it to her. However, I don't think that's the emotion Mariah was singing about, because I was certainly not "higher than I ever dreamed of" in love, though I have since experienced this as an adult, of course. This song also features the classic Mariah high note, and don't pretend you don't try it every single time.

I nearly got tears in my eyes putting this video on a few minutes ago. It takes me BACK, man. The high note is here in full force, as are short shorts, summer field vibes, the whole kit and kaboodle. You don't even need to be watching the video to get those vibes - just listen to the song and sing along and you're THERE, right?

Which version of "Fantasy" do you like better, the original or the remix with ODB? I like to fancy myself a purist, but I can't help but feel extra nostalgic about the ODB version, particularly because of the line about ODB and Mariah going back like babies and pacifiers. How good is that? Man, I miss