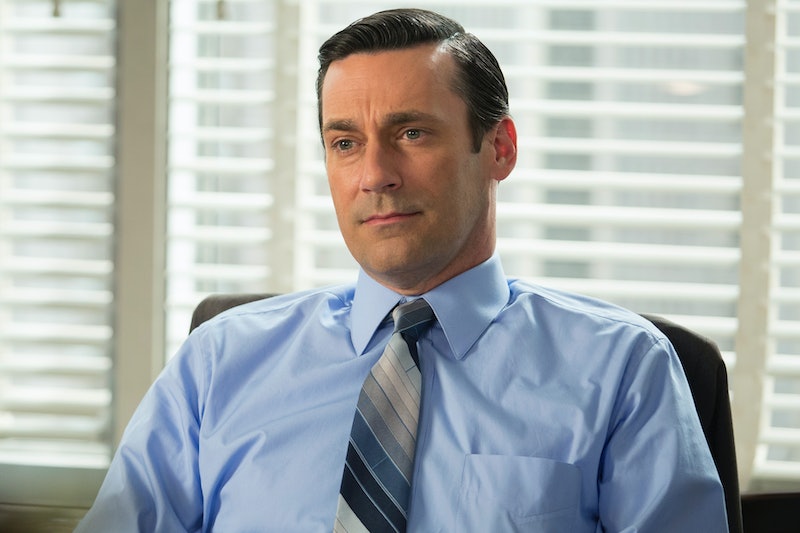 Well here we are, folks. After seven seasons and who knows how many alcoholic beverages, the Mad Men series finale has finally come to pass. And just like with everything else this show has ever done, it's departure was anything but normal. All year long fans have spun and speculated multiple theories regarding how Mad Men could possibly end. Some thought it would conclude with Don's death (hence the whole "falling man" opener), while others theorized that he would morph into the famous D.B. Cooper (hence all of that plane imagery). And while neither of those things ended up coming to pass, that didn't prevent the finale from being chock-full of shocking twists and epic surprises, which ended with a… Coke campaign?

Right from the pilot episode, we've watched each of these characters embark on a magical journey in the world of advertising. And while every fan undoubtedly has a favorite (looking at you, Joan and Peggy!), odds are many of you were just as curious to see where the rest of the Sterling Cooper & Price clan ended up by the time the credits got rolling. So when you're not too busy sobbing into a gallon of mint chocolate chip ice cream over Mad Men's demise, take a minute to see how this phenomenal story concluded for each of the show's main stars.

Oh Don, you sure know how to fool us all. After years of speculating Don's grim demise, our beloved Draper ended up becoming a hippie of sorts after finding himself trapped at a retreat thanks to Stephanie, who kinda left him there high and dry. But it may have been just the thing he needed to get inspired for his big Coca-Cola campaign. Though the ending leaves much to the imagination, one way of looking at it is that Don became inspired by his whole new lease on life and used it as the jumping off point for his next big advertising deal with the iconic soda brand. Like the instructor said during their breathing exercises: it's a new day and a new you. This was Don's way of starting over and taking leap — not out any window as many fans had feared, but rather one of faith.

As we found out last week, Betty has a very advanced form of lung cancer, which means she has around six more months to live. And while sadly no cure could be found, she was able to share a touching phone call with Don. The two didn't say much, but even their sad silence spoke volumes about how much these two characters still care about each other, despite their failed marriage. It's not the fate I wanted for Betty, but at least she and Don were able to end things on good terms. Now if you'll excuse me, I have to go uncontrollably weep into a pillow.

After that badass strut to her new McCann-Erickson office, Peggy met up with Joan who asked her to become her partner in a production company she was starting up. That's right, folks. A Harris-Olson company was in the works. (Has Matthew Weiner been reading my dream journal?) And while she sadly ended up turning the generous offer down, fans were in for a huge surprise on the Stan front. Peggy and Stan finally confessed how much they love one another, which ended with an epic kiss that has my heart bursting with joy.

Has anyone had a rougher season than Joan? After facing rage-inducing sexism at McCann-Erickson, Joan is basically shanghaied into quitting, thus ending the rise of her rather successful career. But in true Joan fashion, she wasn't about to let a slimy weasel (who possesses a lot of the same villainous attributes as OTH's Dan Scott) get her down. In fact, she decided to start up a production company of her very own. Initially she wanted Peggy to be her partner, however, even when that didn't work out, Joan powered through with her idea nonetheless and proved to be the successful business woman we always knew she would be if fully given the chance. Sure, this decision may have come at the expense of her relationship with Richard, but after years of men dictating her fate, it was wonderful to see Joan put herself first for once. You do you, Joan. You do you.

Aside from maintaining to rock that Monopoly Man-esque mustache, Roger is continuing to see Megan's mother, Marie, on a regular basis. In fact, it seems Roger may have finally met his match with this lady. He also made a point of sitting down with Joan to inform her that he wanted their son to be given a decent chunk of his will. That way he'll always be taken care of no matter what. (Say it with me now: awww!!!) Granted, I was always rooting for Joan and Roger to get back together, but it's clear they'll always remain an important part of each other's lives. And for that, I'm eternally grateful.

Do you really want to know what happened to Pete? Really? OK, fine. Before he left for Wichita, Pete shared a nice moment with Peggy when he stopped by to give her a parting gift: a cactus. Seemed rather fitting. Now moving on…

I like to think of Sally as Mad Men's one shining beacon of hope for the next generation. And it seems as though that sentiment is now well-founded. In light of her mother's terminal condition, Sally refuses to let this tragic news defeat her. Instead she rises above it all and takes charge in a way neither of her parents ever could. We see her doing the dishes and growing into the independent, self-sufficient woman she was always destined to become. Sure, her mother's death will be hard on her. But we also are left feeling that she'll not only survive the loss, but thrive in spite of it.

What else is there to say about this lovable goof other than #Peggy&Stan4Eves! Thank you, Weiner. You served this 'ship well.

So goodbye, Mad Men. It's been one heck of a ride. But even though you may be gone, thanks to characters like this, you won't be soon forgotten.