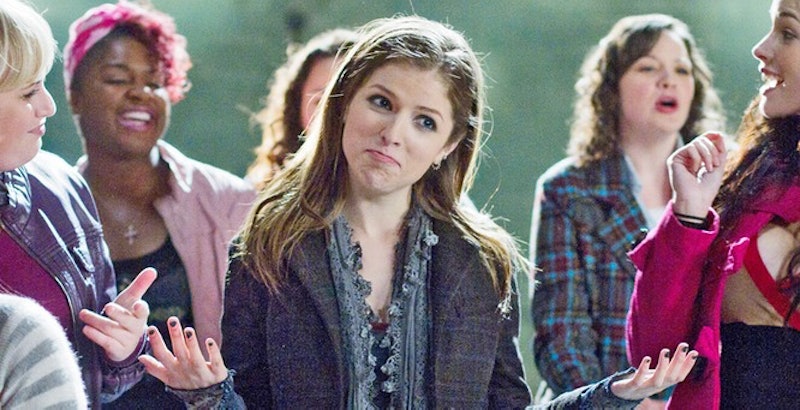 The Barden Bellas are finally coming back, and it's going to be aca-awesome! After nearly three years since the original Pitch Perfect debuted, Pitch Perfect 2 will be released on May 15, and I can barely contain my excitement! If the sequel's trailer wasn't enough to whet your appetite for some new material from our favorite pitches, the clip introduced by select cast members at the 2015 MTV Movie Awards had many a fan exclaiming, "YAS!" Although we have less than a week to wait before scurrying off to our favorite cinemas in order to witness the Bellas newest adventures, these few remaining days are absolutely dragging by — it's so close but feels so far!

Luckily, I have taken it upon myself (you're welcome) to brainstorm a few ways we can tie ourselves over before the film's release, as well as a few methods for preparation. The anticipation over this sequel has likely increased tenfold for many of us with the release date quickly approaching, and we need to channel that energy somewhere beforehand to avoid falling victim to distractive behavior, such as: obscuring other theater goers' view of the movie by dancing atop our seats; belting out Ace of Base's "The Sign" during scenes where no one is even singing, and repeatedly shouting out "this is aca-awesome!" like some kind of over-caffeinated mantra. Without further adieu, let's take a look at the ways to prep for — and celebrate — Pitch Perfect 2:

Rock Out At Karaoke

I heard somewhere that karaoke means "tone-deaf," so no need to be shy if you don't have powerful pipes. I'm sure you'll sound aca-awesome, and there's nothing like a good round of karaoke to get you extra amped to see our favorite Bellas on the big screen once more. If you want to kick it up a notch, I would like to suggest "No Diggity" by Blackstreet as a go-to song choice.

This one kind of goes without saying. I'm sure this isn't too formidable of a task, being that we all probably enjoy watching Pitch Perfect ad nauseam even without the anticipation of a sequel — am I right?!

If you're going to be re-watching Pitch Perfect, there's a good chance that said re-watching is going to make you want to take a trip down a road marked "nostalgia" with The Breakfast Club.

Are you feeling jittery from the unadulterated excitement you're experiencing whilst waiting for Pitch Perfect 2? To tie yourself over, channel some of that energy into perfecting your cup-playing skills.

Burritos are amazing, but re-watching the original Pitch Perfect may leave a bad taste in your mouth when it comes to this type of cuisine. Order a pizza instead.

Take Care Of Your Vocal Chords

Holler at a cup of chamomile tea and some honey, because you don't want to end up with a bad case of nodes the day this musical masterpiece premieres.

Just as we need to take care of our vocal chords and harness our energy, we need to get proper rest before enjoying our favorite pitches' return to the big screen.

Round up your crew of bad pitches to join you at the theater of your choice.

If there's one film that is as aca-awesome as Pitch Perfect, it's Bridesmaids. Bonus: Rebel Wilson — who plays Fat Amy in Pitch Perfect — makes a hilarious appearance in the film. I believe viewing Bridesmaids, The Breakfast, and Pitch Perfect constitutes an appropriate binge watching session in preparation of Pitch Perfect 2. That alongside the other aforementioned tips should leave you fully prepared for the movie's aca-awesome debut.