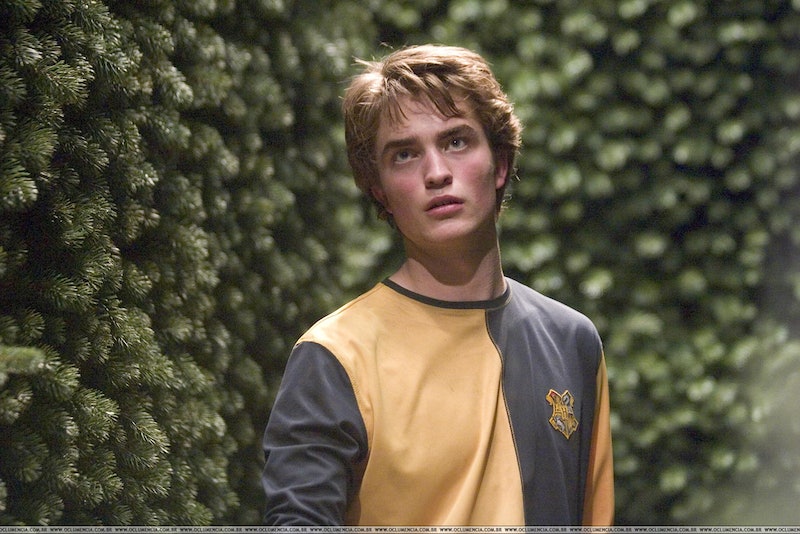 Sorry, Twilight and Edward Cullen fans, but whenever I see or think of Robert Pattinson, I immediately think of Cedric Diggory from Harry Potter and the Goblet of Fire . Don't get me wrong, I love R. Pattz as Edward Cullen in Twilight, but there's just something about the actor as Cedric that makes my heart melt more so than the extremely pale vampire who stole the heart of Bella Swan. For anyone who feels the same way, have you ever noticed that Robert Pattinson is like Cedric Diggory in real life?

I know some actors are all into method acting and really get into their characters, but I never knew someone could keep emulating a former character in their daily lives. It's kind of scary how much Pattinson is like the beloved Hufflepuff who made fans weep in the fourth book. Even though Pattinson has never entered a real-life Triwizard Tournament (at least I don't think he has), nor has he ever encountered a monster like Voldemort or been able to cast spells, there are still several similarities between R. Pattz and Cedric.

Here are six times R. Pattz was just like his Harry Potter character.

That Time He Danced

Have you ever seen R. Pattz dance? Remember that time Cedric danced with Cho at the Yule Ball? Their dance moves are off the chart.

That Time He Went Swimming

Similar to Cedric taking a dip in the prefects' bathroom and swimming in the lake to save Cho, Pattinson too loves to get his feet wet every now and again.

That Time He Won An Award

Technically, Cedric and Harry both won the Triwizard trophy, which is pretty much equivalent to R. Pattz winning awards, like all those MTV Movie Awards and People's Choice Awards.

That Time He Had Relationship Drama

Just like Cedric, Harry, and Cho, Pattinson too had some relationship drama with Twilight co-star and former girlfriend Kristen Stewart. Pattinson and Stewart dated from 2009 to 2013, but once Stewart was caught kissing her married Snow White and the Huntsman director Rupert Sanders, well her romance with R. Pattz went down the drain.

That Time He Was Ogled

Like Pattinson, Cedric knew what it was like to have people stare at him and root for him, especially after entering the Triwizard Tournament. When isn't Pattinson being photographed? When aren't fans drooling over him?

That Time He Was Friends With Harry

Cedric and Harry Potter were friends. Guess what? Pattinson is friends with Harry Styles. There is officially no doubt R. Pattz and Cedric are the same person.