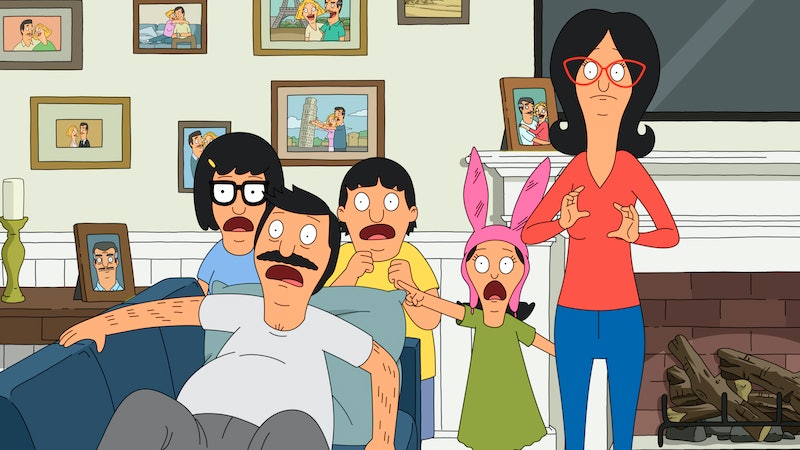 With Fox canceling my beloved The Mindy Project, I am not thrilled with the network, but at least they have decided that the hilarious Bob's Burgers can keep on trucking along (alllllriiiiight!). Bob's Burgers was renewed for Season 6 back in Jan., so the Belcher clan will live to see another season. Considering that The Simpsons has been on the air for 26 seasons (!), I am glad that Fox could find it in its heart to renew the underdog cult animated series. The Belchers themselves are underdogs and are perhaps the most relatable family on TV (as long as you're a weirdo) and the series always manages to have me giggling or teaching me a lesson about loving and valuing family — without the corniness that is often incorporated in sitcoms. (I'm looking at you, Modern Family.) [UPDATE: Deadline reports Bob's Burgers will return Sep. 27.]

Season 5 will end with Fox showing two new (unrelated) episodes on Sunday, May 17 (one at 7:30 pm and the other at 9:30 pm). The show has often had random time slots since its future has often been uncertain. Although there is no release date for Season 6 yet, the last three season premieres have started in the traditional time frame of fall and were full length seasons. (Seasons 1 and 2 premiered in Jan. and March, respectively, and were both under 15 episodes.) With Season 6 having 22 episodes, there will be a lot more burgers and puns to go around, so here are some things I'd like to see in Season 6.

Bob's Burgers has had amazing guest stars over its first five seasons and I don't expect that to change in Season 6. But I want to petition for an Amy Poehler guest spot. So many actors who are affiliated with Poehler (particularly a lot of Parks and Recreation alum) have already loaned their voices to the show: Megan Mullally, Nick Offerman, Aziz Ansari, Will Forte, Ben Schwartz, Jon Glaser, Fred Armisen, and Matt Besser (Poehler's ex and fellow Upright Citizens Brigade member) to name a few. Doesn't it just make sense for Poehler to come on? She could be a girl at school with Tina (like Jenny Slate's Tammy) or a new friend (or nemesis) for Linda.

The Belchers Get A Dog

In the Season 5 episode, "Eat, Spray, Linda," Louise revealed that her and Linda go to the pet store to hang out with adorable puppies. What if the Belchers actually got an adorable puppy? Hell, it doesn't even have to be a puppy. It could be a really bizarre animal to be more appropriate for the eccentric clan. Louise already proved she knows how to take care of a chinchilla in "Adventures in Chinchilla-sitting." Just don't let Hugo the health inspector see the new pet in the restaurant.

I absolutely love it every time Linda's sister Gayle is featured on the show. From her romantic interest in Bob to her board game "Gayle Force Winds," Megan Mullally's Gayle is my favorite recurring character on the show. Although I don't want Bob's Burgers to overuse her, I require more Gayle in Season 6. Last time there was a Gayle-centric episode, the show spoofed Jane Austen and Game of Thrones. Clearly, Gayle inspires true greatness from the writers.

Helen was introduced in Bob's Burgers' May 10 episode "Housetrap." Voiced by It's Always Sunny in Philadelphia's Kaitlin Olson (Sweet Dee is the besssssst), Helen is a widow who hired Teddy as a handyman. Teddy has a crush on Helen, and she actually seems interested in him too. Although Linda and Louise were convinced that Helen was responsible for murdering her deceased husband, they decided that Helen wasn't actually a black widow (though I am not so convinced). As Bob pointed out, even if Helen is a murderer, maybe she is good for Teddy... because anyone who shows interest in the indescribable Teddy is good for Teddy.

The Return Of The Equestranauts!

It's hard to say which episode of Bob's Burgers is my favorite, but a true standout was Season 4's "The Equestranauts." Tina's favorite show about super ponies led to Bob diving deep into the subculture of the fandom in order to get Tina's beloved Equestranaut horse doll back. It's hard for me to articulate how much I adored this wacky episode, but Bob's Burgers — please hear my plea and bring back The Equestranauts.

Bob's Burgers always has some sort of new song featured in each episode, but I want a full-blown Linda Belcher-helmed musical production. The Season 5 premiere showed the Belcher kids uniting to put on a Die Hard-Working Girl combined musical in the glorious "Work Hard Or Die Trying, Girl," so the musical doesn't need to be the Season 6 premiere episode, but it must be included. How about a musical in the restaurant like Season 1's "Hamburger Dinner Theater"? Jimmy Jr. can be the assistant choreographer.

Jon Hamm Back As The Talking Toilet

Now that Mad Men is over, I think it's time for Jon Hamm to return as the talking toilet on Bob's Burgers. Although Gene has moved on from the magical talking toilet he discovered in the woods in Season 3, a reunion would bring the middle Belcher child (and the rest of the Bob's Burgers fandom) so much joy.

Season 4 ended with a two-part episode and though I don't need cliffhangers from Bob's Burgers, I wouldn't mind an arch lasting two (or even more!) episodes. The writers of the Fox animated show have proven they are more than enough clever to pull a high stakes move like that and though I don't necessarily want a Bob's Burgers movie (although why not?! The Simpsons has done it) an epic saga, multi-part episode could be the perfect way to ring in Season 6.

More like this
Who Could Die In The Stranger Things Season 4 Finale?
By Kadin Burnett
Julie Andrews Revealed A Surprising Behind-The-Scenes 'Bridgerton' Detail
By Grace Wehniainen
'Stranger Things' Star Joe Keery Ditches The Upside-Down With New Single "Change"
By Radhika Menon
Everything To Know About Obi-Wan Kenobi Season 2
By Kadin Burnett
Get Even More From Bustle — Sign Up For The Newsletter