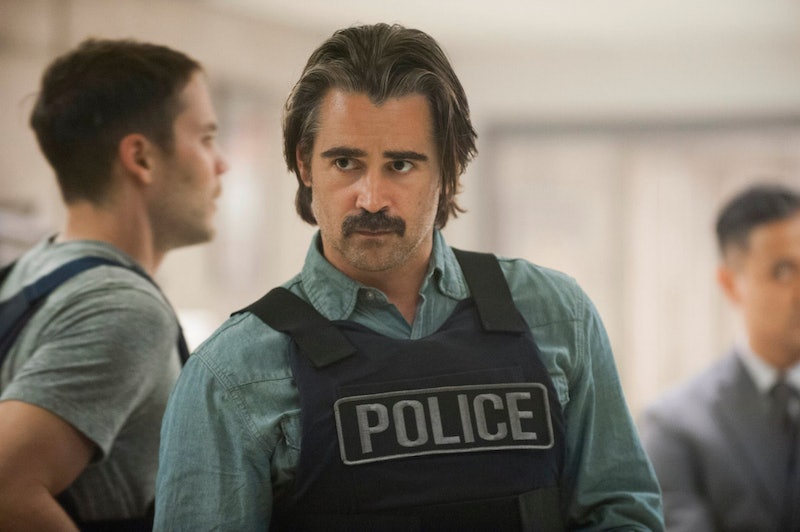 After a brief teaser, a batch of photos and a slew of character posters, the new True Detective Season 2 trailer is here. And this time we actual have some dialogue. Where Season 1 of the hit HBO event series from Nic Pizzolatto gave Matthew McConaughey's Rust Cohle all the dark and brooding lines about mortality, fate, isolation or whatever his trip drugs made him hallucinate that day, this time around all of the True Detective characters are getting some juicy dialogue.

The new footage kicks off with a word from Vince Vince Vaughn's Frank Semyon: "Sometimes your worst self is your best self." Colin Farrell's Ray Velcoro tries to one-up him though with, "My strong suspicion is we got the world we deserve." The quote from Taylor's Kitsch's Paul Woodrugh falls a bit short, but he makes up for it with a sensual scene. The same goes for Rachel McAdams as Ani Bezzerides. Her words aren't as philosophical as the first two, but she proves she knows her way around a blade. (I wonder if all detectives know how to handle such a weapon?) So with that, I declare Farrell to be the new McConaughey. Don't let me down!

Of course, True Detective garnered a massive following with its first season stars McConaughey, Woody Harrelson and Michelle Monaghan in a mystery about a slew of occult-like murders. Season 2 will feature the four previously mentioned players in the "scorched landscapes of California." Velcoro is a "compromised detective," Semyon is a career criminal and entrepreneur in danger of losing his life's work, Bezzerides is a Ventura County Sheriff’s detective at odds with the system she serves, and Woodrugh is a war veteran/motorcycle cop who discovers a murder that brings all of these characters together.

Given the success of the first season, it's unthinkable at this point that round two will fall flat. People can't get enough of dramatic transformations, and these actors haven't taken on such serious and dark roles in quite some time.