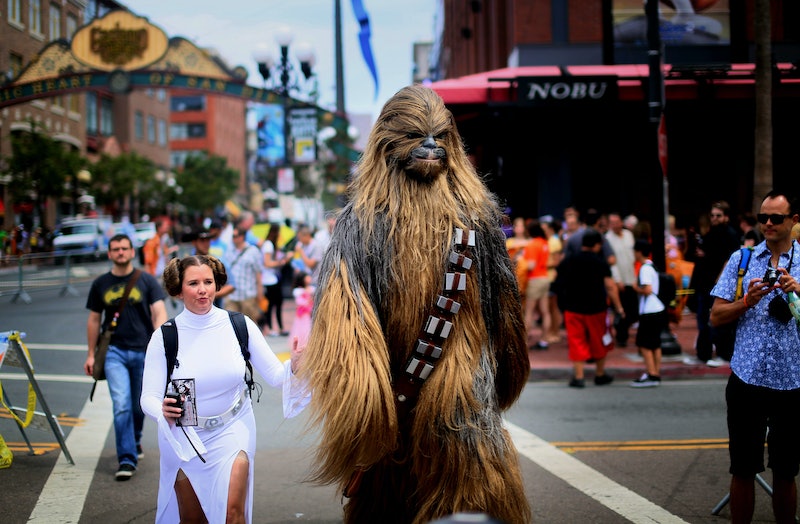 My name is Shaun Fitzpatrick, and I'm a Potterhead. Also a Whovian, a Sherlockian, a Star Warrior, and a Whedonite, among many other things. I have always been, and always will be, a geek who wears my (two) hearts on my sleeve. At 24, I'm more than happy to admit this, but I wasn't always quite so comfortable in my own geeky skin.

It can be hard to truly embrace your inner geek girl, though, and not just because you may be afraid that people will think you're lame (you're not) or totally weird (you are, but in a great way). Like any other community, the geek community is massive, has its own language and subgroups, and can be really confusing. It can seem intimidating to get involved, especially since it sometimes doesn't seem to be the friendliest atmosphere for women (even though it totally can be!). What you really need is a map, a guide through the Geek Kingdom that will eventually lead you to your rightful place among your fellow fangirls.

Luckily, such a map now exists, and you don't even have beat a giant troll or snag 25 crystals to earn it! Sam Maggs has released The Fangirl's Guide to the Galaxy , your passport to entering the fangirl community.

Maggs has a lot of geeky street cred (she was named 2013's Awesome Geek Feminist of the Year by Women Write About Comics), and she wants to help you release your inner fangirl. It's easier than you think! The Fangirl's Guide to the Galaxy will walk you through the process, sharing tips and suggesting the best titles for your viewing/reading/gaming pleasure. The best part is that Maggs' book is dedicated to the lady fan, meaning that she also addresses topics like combating sexism within the geek community and defeating the heinous, lurking Internet trolls. Basically, this book is the fangirl's new best friend.

Want a quick crash course on letting your fangirl flag fly? Here are some tips from Maggs.

There are very, very few people who embrace all aspects of geek culture. So never let anyone make you feel inferior just because you don't like their particular brand of nerdy. Maggs breaks down some of the major subcategories of fandoms to help you find your tribe.

Like Harry Potter? You're a Potterhead. Joss Whedon superfan? Call yourself a Whedonite. There's a group for whatever your interest is, you just have to find it. And, of course, you can totally be a member of a bunch of different fandoms. Don't lock yourself down! Fangirls can love Buffy and Supernatural with an equal amount of obsession.

Show Off Your Fangirl Pride

Sure, you talk about your OTP all the time, but wouldn't it be nice if people knew you were a diehard fan without even having to open your mouth? Fangirls of varying degrees of dedication can show off their love for their fandom with everything from T-shirts to print dresses to more subtle geeky touches. Sites like Etsy, Her Universe, and Black Milk Clothing have some great choices (obsessed with the X-Wing cardigan from Her Universe!). Want to really show that you're hard-core for your fandom? Maybe consider investing in an awesome tattoo (looking at all my girls out there with Deathly Hallows ink!).

Get Your Fanfic On

First, pick your favorite character pairing. Remember, this is the Internet, and the Internet likes things a little strange, so don't be afraid to pick something not quite canonical. Then get writing! Find someone willing to read your stuff and give you feedback (called a beta reader), and then share it with the world! No matter what you write about, be proud. You created something, and that's awesome!

What's the point of being a fangirl if you have no one to obsess over the latest Star Wars trailer with? Half of the fun is sharing your geeky interests with others, and it's the best when you find someone as passionate about your loves as you are. It may seem like a challenge to find your fellow secret nerds (I personally drop a lot of book/show references and see who perks up when they recognize them). Maggs suggests attending events like pub trivia nights, book clubs, and burlesque shows to find people who share your interests. Maybe join a local Quidditch team (because yes, these exist)!

Anyone who has ever visited the Internet (hi!) knows that trolls are the absolute worst. They hide behind their avatars and seem to exist just to make you feel bad about yourself. Fangirls who find themselves on online message boards or are involved in online gaming communities know that sometimes being a woman on the Internet can seem like a liability. People can be jerks, but sometimes they can also cross a line and their name calling can turn into sexual harassment, threats, and even occasionally hacking into your account and stealing and spreading your personal information. Just for daring to be female and online.

Whatever you do, Maggs cautions, do not feed the trolls. Instead, if you're really feeling unsafe, report them to the admins of whatever site you're using, or go to the police if it really starts to get out of control.

Does it ever seem like fangirls are speaking an entirely different language? Well, they kind of are. And if you want to get into the community, you have to learn the code. Luckily, Maggs is like a Rosetta Stone for geek speak. She gives definitions for regularly used fangirl lingo like "the feels" and "GLOMP." Soon you'll be able to "squee" and "stan" like the fluent fangirl that you are!

Prep for a Convention

Visiting a convention can really test your fangirl aptitude, not to mention your devotion. You're committing yourself to long hours in line, very little sleep, and possibly a pretty high price tag, depending on what convention you choose to attend. But! You also have the opportunity to make new friends, wear some rad costumes, and maybe even meet your celebrity object of nerdy obsession!

If this sounds up your alley, this is a good time to pick up Maggs' book: she gives tips on costume preparation, safety (be a safe fangirl, please!), and general convention info. Plus, she breaks down some of the best conventions for your particular area of interest, so you know which ones are worth your time!

No matter what you're into or how you choose to show off your fangirl pride, remember that you are freakin' awesome. As Mags writes, "Getting invested in a fictional world means you have a wonderful imagination, a big heart, and the capacity for endless creativity. No one can say anything bad about that." Be proud of who you are!

More like this
'Bridgerton' S3 Teases Exciting Social Season For Penelope Featherington
By Bustle
The 'Firefly Lane' Book Ending Teases Way More Tears To Come In 2023
By K.W. Colyard
Allie Rowbottom Will Have Her Feminism With A Side of Botox
By Samantha Leach
The 'Lady Chatterley's Lover' Book Leaves Us With A Troubling Question
By Catharina Cheung
Get Even More From Bustle — Sign Up For The Newsletter