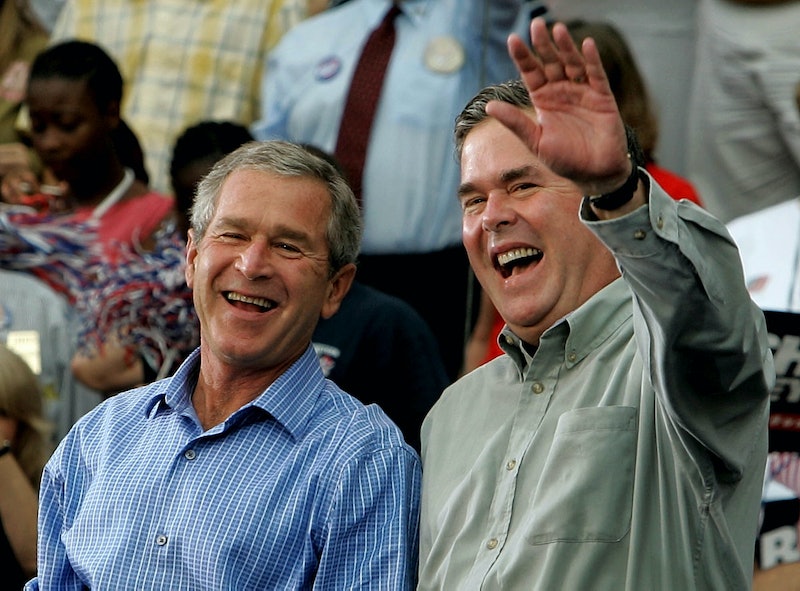 Possible 2016 Republican presidential candidate and former Florida Gov. Jeb Bush has been trying to distance himself from his older brother and former President George W. Bush since his interview with Megyn Kelly on Fox News when he said he would have supported going to war in Iraq if he'd been in his brother's shoes years ago. After a lot of bad press for that statement, he reversed his position in a speech to Arizona voters, and told them that, knowing what we know now, he would not have made the decision to invade Iraq, according to TIME. Jeb's quotes on George are just all over the place. They go from funny, to dismissive, to loyal in a matter of weeks.

It can't be easy living in your older brother's shadow, especially when he was president of the U.S. for two terms and your father was president for one term as well. Although he hasn't officially announced his candidacy, he has started trying to separate himself from his brother and father. For example, he gave a speech to the Chicago Council on Global Affairs and said "I'm my own man, and my views are shaped by my own thinking and my own experiences." Despite that, he's still fiercely defended them and the choices they made while in office. Check out some of Jeb's most loyal and funny quotes about George W.

When NBC News asked Jeb how he was different than his brother:

I'm much better looking than my brother. I'm younger than him. If I run it will be 2016, not 2000 — the world has changed dramatically. The context of a campaign will be different. The country is different. It's obvious that my life experience is different. All of that still doesn't change anything about my love for him and my respect for him.

In a speech earlier this year, Jeb praised the tax cuts passed by George, which some have argued partially contributed to the largest country's largest deficit because they primarily benefited the wealthiest members of society, according to CNN:

I am proud of President Bush for standing for what's right as it relates to tax policy. ... And we should make the (Bush) tax cuts permanent.

In 2010, CNN's Candy Crowley asked Jeb where he disagreed with his brother "publicly or privately." He gave the below statement, and when Crowley pressed him further, he added, "Till death do us part":

I'm the only Republican that was in office when he was in office as president that never disagreed with him. And I'm not going to start now.

He praised his brother again in a radio interview with conservative host Sean Hannity, according to NBC News. Despite his admission that we should not have gone to war in Iraq, he still decided to defend the war during the last few years of George's presidency:

In the last few years of my brother's presidency, the surge was quite effective.

According to the Roper Center for Public Opinion Research, George's approval rating fluctuated from 92 percent in the aftermath of 9/11 to 19 percent during the end of his tenure as president. According to The Guardian, the main problem U.S. citizens might have with electing a third Bush is that they're still bitter about the last one. In an effort to combat this, Jeb gave the following Labrador-loyal statement to NBC, according to The Guardian:

In his four years as president a lot of amazing accomplishments took place. So my guess is that history will be kind to my brother, the further out you get from this and the more people compare his tenure to what's going on now.

Later, CNN asked whether Jeb thought the negative public perception of the Iraq war would change, he ardently defended his brother, yet again. (This is officially a trend. #CantStopWontStop)

Yes. You know, a lot of things in history change over time. I think people will respect the resolve that my brother showed, both in defending the country and the war in Iraq. But history will judge that in a more objective way than today. The war has wound down now and it's still way too early to judge what success it had in providing some degree of stability in the region.