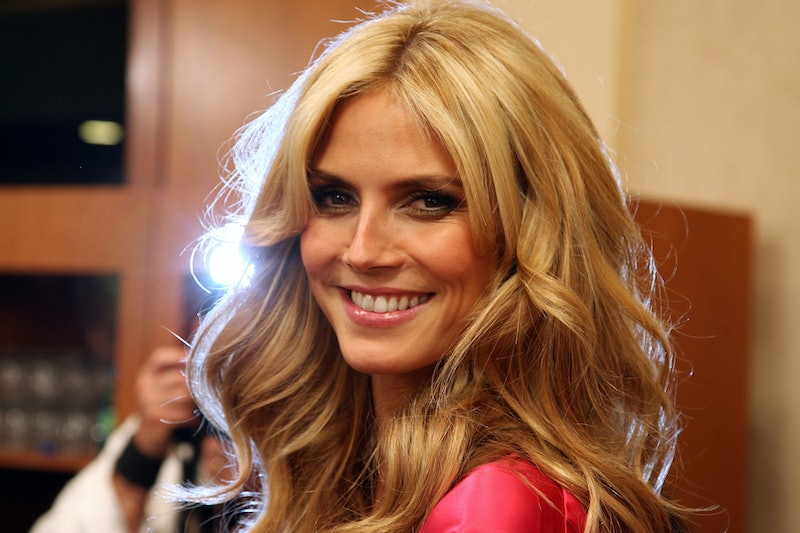 When you think of Heidi Klum, conservative is probably not a term that comes to mind. Well, you'd be right. In a recent interview with Elle, Heidi Klum describes her style as "fearless," and she doesn't seem to be planning on donning a demure pantsuit any time soon. Really, we shouldn't be surprised by Klum's admission that conservative just isn't her thing. Just took a look at her Halloween costumes.

When Klum spoke with Elle, the stylish star explained that her fashion choices are all motivated by personality. That's why the beauty basically chooses what she wants when it comes to her clothing choices, and it's kind of a great rule of thumb to go by. Klum explains:

"I think clothes show your personality—you know you love color and you love having fun, and I can see that when you walk in the door. It doesn't mean that you're not serious, but it means that you're serious and you like to have some fun, too. And I like to show that in my clothes—that I'm fearless, that I don't always care what people think [about] what I personally wear."

The model goes on to discuss how her beauty routine differs from the drastic looks she rocks in photoshoots. Just recently, the star posted a shocking before and after photo of herself illustrating just how talented the people who help her prep for these shoots are. However, her everyday beauty routine isn't quite as intense. Speaking of the differences, Klum tells Elle:

"We're dealing with professionals here. They do your makeup and they do your hair, and you will look a lot different than if you do your own. When I do my own hair and make-up, I don't look like that either. I don't know how to put my eyelashes on perfectly, when I curl my hair it doesn't look so messy, when I do it looks kind of like too curly, do you know what I mean? Mine is just never that effortless looking. They just know what they're doing."

Heidi's comments highlight an important aspect of the beauty industry. When we see models and actresses on magazines or the big screen, they've been carefully constructed to look a certain way by professionals. In their every day lives, these stars are no different than us. Klum probably ends up with an eyelid full of liquid liner when she tries that cat eye look, too.

No matter what the occasion, Klum stays true to herself. It doesn't seem to be changing in the future either, so don't expect to see the model rocking conservative duds. "I'm always a risk-taker," Klum explains to the magazine, "and my publicist, we'll talk about this a lot. Sometimes she's like, 'Why aren't you wearing something a little bit more conservative?' But that's not me." Kudos to Heidi on always remaining true to herself, and being absolutely one of the most inspiring fashion mavens around town.