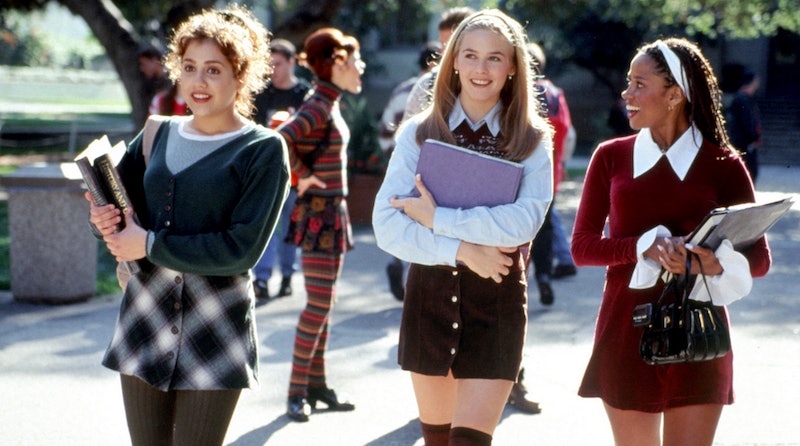 Clueless is one of the most important movies for the millennial age — Amy Heckerling’s coming-of-age tale, based on Jane Austen’s Emma, centers on Cher Horowitz, a valley girl who knows really nothing past her world of shopping at The Galleria, going to local parties, and living in her “classic” mansion. When Tai Frasier moves to the halls of Bronson Alcott High School, Cher and her best friend, Dionne, feel the need to adopt Tai and make her own of their own — completely popular, that is. Along the way, Cher expands her world just that much as to realize there’s more out there, and also that she’s in love with her ex-stepbrother Josh, played by a sparkly-eyed Paul Rudd.

So why is Clueless such an important movie? Honestly, it just is. Not only is Heckerling’s screenplay entirely quotable (if you tell me you’ve never said “As if!” in your life, you’re lying to me), but it’s a perfect snapshot of Los Angeles in the mid-1990s. The nose jobs, the Persian mafia, the fashion, the music: It’s all there. It’s smarter than it needed to be, and it’s fun. It’s fun to picture your closet like Cher’s. It’s fun to imagine your life as a “Noxema ad,” as Cher describes hers. In the land of so many depressing flicks — Se7en , The Usual Suspects , and Twelve Monkeys all also came out in 1995 — it’s a feel-good film that you can watch over and over again. Clueless is not necessarily the caviar of movies. It’s more like the boxed macaroni and cheese, and sometimes, you really just want boxed macaroni and cheese.

Now twenty years later, I rewatched Clueless as an adult, and here are the things I noticed.

Everyone In This Movie Is/Was Famous

Clueless’ cast list was packed with young talent in 1995, but who would have known then just how famous the cast would be now? Paul Rudd is arguably the most successful movie star, but Alicia Silverstone, Donald Faison, Brittany Murphy, Jeremy Sisto, Breckin Meyer, and Stacey Dash all went on to illustrious projects in some form or another following Clueless. Not to mention that stars Dan Hedaya, Wallace Shawn, and Julie Brown were already famous before the film.

We’ve put a man on the moon. We have programs going to Mars. I can assume we have the sophisticated missile power to blow a fly off someone’s head from 3000 miles away. So why doesn’t Cher’s closet program exist? I would love to pick my “school clothes” out like this every morning. It’s been 20 years, you guys. Let’s get on this.

The Rest Of The Technology Is Hilarious

Cher may have a brilliant way to organize her clothing, but that’s about all she has in terms of technology. The phones are the size of bricks, pagers are numerous, and fax machines dot the professional landscape. There is a definite technological disparity here.

Cher’s portrayed as a ditz for most of the film, but she’s really not. She’s smart in her own way, and this is shown during her debate against Amber. Though she pronounces Haitians “Haiti-ans”, Cher’s analogy about her father’s party and assertion that if the “government could just get to the kitchen and rearrange a few things, we could certainly party with the Haiti-ans” makes sense, debatewise. You don’t have to agree with her views on foreign policy, but her argument makes sense. It really doesn’t say RSVP on the Statue of Liberty, by the way.

The Men Of Clueless Aged So Well

I’m not saying the women didn’t, but Paul Rudd, Donald Faison, and Jeremy Sisto? As Tai would say, “break me off a piece of that.” Watching Clueless again makes me miss Scrubs and Suburgatory.

This iconic mall brand is no more, and their sister store, Wet Seal, is also on its last breaths. Where will I go now to find floppy hats and battle buyer’s remorse? Also, there is so much velvet clothing that all had to be purchased at Contempo. I’m sure of it, because I owned a lot of it.

The Hats Are Epic

A lot of the 1990s fashions show in Clueless are perfectly relevant now, given the propensity of trends to mercilessly repeat themselves. High-waisted, baggy-ish jeans and crop tops reign supreme in my neighborhood. One thing that hasn’t come back are all the hats. A “nod to the crispy Seattle weather” or not (it’s not like SoCal is cold), everyone wears a hat in the film at least once. From Dionne’s Dr. Seuss structured number to Cher’s au courant beret, all of these hats make me want to expand my own collection.

Josh & Cher Never Clean Up After Themselves

They’re both spoiled rich kids (let’s be real), but damn, Lucy doesn’t want to have to clean up after you all the time. She’s got enough to do. In the scene where Josh is noshing on carrots before dinner, he doesn’t put the container away. In the scene where he is making half a sandwich for himself, he leaves out all of the ingredients. You guys are basically adults. Get it together!

Christian Is So Obviously Gay

This is an interesting look at 1995 audiences versus 2015 audiences. I think that today’s audiences would know that Christian was gay after their first impression of him. There were far fewer gay role models on television and in movies in 1995 (Ellen Degeneres wouldn’t come out until 1997, and Will & Grace didn’t start until 1998), so maybe 1995 audiences were a lot more surprised about this plot point than today’s would be.

Amber’s Hairstyles Are Works Of Art

Ambular, as Cher calls her, is the wannabe of the wannabes, but you can’t put a girl down for trying, and try Amber does. While Cher and Dionne and even Tai’s hair stays pretty simple during the course of the film, Amber struts around in elaborate updos and curls.

The Screenplay Is Amazing

Credit to Heckerling for writing a really fun movie that also featured some really smart teens. I know that Bronson Alcott is, in Cher’s words, a “really good school,” but I can’t really think of any teenage movies that have lines like, “Street slang is an increasingly valid form of expression. Most of the feminine pronouns do have mocking, but not necessarily in misogynistic undertones.” And yes, I wrote that line down from memory.

I could go on and on about Clueless, but I think it’s best to quit while I’m ahead. No one wants to read me quoting the movie for its entirety. Clueless is one of the movies of my generation, and it’s just as satisfying to watch in 1995 and 2005 as it is in 2015.