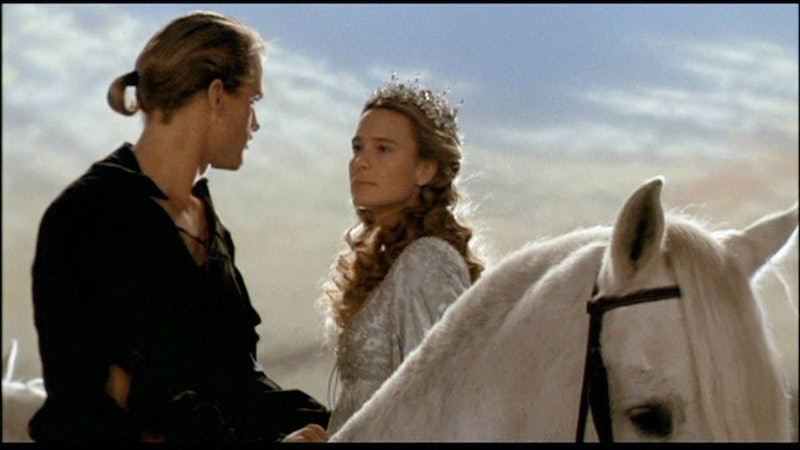 Last month, I went to a friend's party and just like any other party, there was drinking, cake, and The Avengers playing on TV in the background. But once the Marvel movie ended, it was up to me and a new friend to select the next film from the host's DVD collection, mostly because the host was busy, well, hosting. I decided it was time to rewatch The Princess Bride , because it's one of my favorite movies of all time and a real modern classic. And the party agreed — every time other guests passed by the TV as we watched, they realize what movie we were watching, then nod and say "Nice."

If you've never seen The Princess Bride, I hope to inspire you to give it a watch — you won't regret it. The movie tells the tale of true love between Wesley (Cary Elwes) and Princess Buttercup (Robin Wright, pre-House of Cards), revenge for Inigo Montoya (Mandy Patinkin!), and lots of humor and heart. Other than gaining sweet peer approval from the rewatch at the party, I also noticed that there was a lot of things in the movie I had never noticed. Not only is The Princess Bride rooted in the world of fairy tales, but it was also released in 1987, which was a totally different era.

Here are some things I missed — and maybe you too — when I originally saw The Princess Bride.

1. The Movie Was Actually Filmed In England

During our viewing, my party companion shouted out that "everything looks like it's on a sound stage!" Upon further research, that's actually not the case. The Princess Bride was filmed around the English countryside and Ireland, including County Clare's Cliffs of Mother (as the Cliffs of Insanity) and Penshurst Palace in Kent.

2. Peter Falk Has A Glass Eye

In some shots, you may notice that Falk (who plays the grandfather during storytelling time) has a right eye that looks a little peculiar. That's because Falk's right eye was removed at age 3 due to a rare eye cancer. He's worn a glass eye for most of his life.

In the famous sword fight confrontation between Inigo Montoya (Mandy Patinkin) and the six-fingered Count Rugen (Christopher Guest), Montoya gets stabbed a number of times but he never dies. Is it magic or is he just invincible? Either way, he's a true hero.

Let me be kinda girly for a moment — Princess Buttercup has the most gorgeous dresses and it kinda makes me jealous. There aught to be a Princess Bride inspired dress collection somewhere. My favorite is her flawless wedding dress.

5. Andre The Giant Totally Was A Giant

Former wrestler turned actor Andre The Giant played giant Fezzik in The Princess Bride — and he really was a giant. Andre was 7 foot 4 and weighed around 500 pounds, according to his official bio. Andre had a condition called giantism, which meant his body produced an abundance of growth hormone causing his body to grow during his entire life.

6. The Grandfather Tells His Grandson 'As You Wish' At The End — Which Means 'I Love You'

It is explained that Wesley always responds to Buttercup's demands with the words, "As you wish." She soon realizes that he really means, "I love you." At the very end, the grandson tells his grandfather that he wants to hear the whole story again tomorrow. Grandpa's response: "As you wish."

All together now: Awww!

More like this
The 'Hocus Pocus' Sequel Finally Has A Release Date & It Makes Total Sense
By Shannon Barbour and Radhika Menon
Everything You Need To Know About The 'Knives Out' Sequel
By Grace Wehniainen
Everything To Know About 'The Hunger Games' Prequel Movie
By Grace Wehniainen and Radhika Menon
Kimberly J. Brown & Daniel Kountz Looked Back On Their ‘Halloweentown’ Romance
By Stephanie Topacio Long
Get Even More From Bustle — Sign Up For The Newsletter