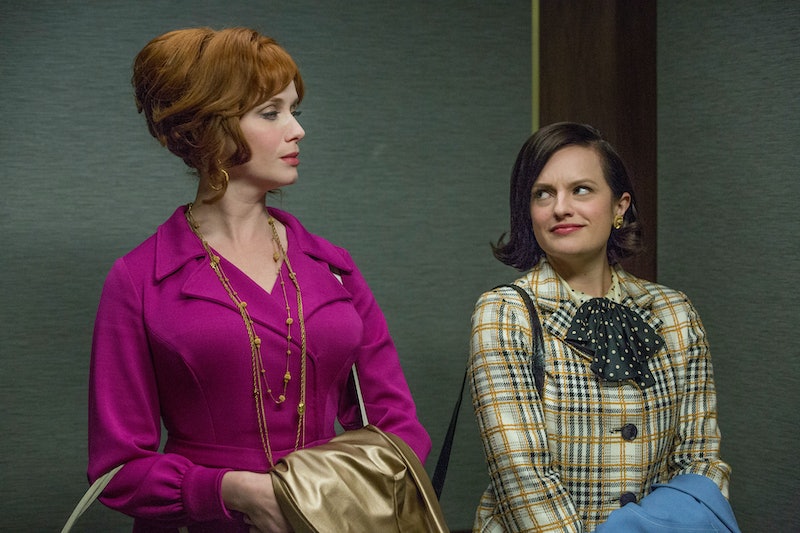 As Mad Men draws to a close, I've been getting all nostalgic about the beats and performances that have made the show such a masterpiece. So many of the drama's iconic scenes feature the ladies of Mad Men being the flawed and powerful goddesses that they are. Despite being set in a dark time for women, the most feminist Mad Men moments shout out the battles that characters like Joan, Peggy, and Megan were forced to fight every day. It's almost difficult to look at sometimes, but necessary to see how far society has come and have far it's got yet to go.

Don Draper may be the enigmatic anti-hero of the show, but these instances show that actual heroism comes in many forms and isn't always rewarded. Mad Men has never insulted its audience or its characters with false optimism; I won't pretend that life will be easy for any of these women after the final credits role. (It isn't much easier for women in the workplace even now.) But their strength, intelligence, and sass deserve all the praise (and GIFs!) the internet can offer. I expect a few more feminist wins in the series finale; for now, here are my 11 favorite powerful, moments for the women of Mad Men.

1. Sally Calls Out Her Dad's Sliminess

In the now infamous grown-up Glen episode from Season 7, Don flirts shamelessly with his teenage daughter's teenage friend. Sally is totally grossed out and doesn't let him get away with it. Right on, little sister.

2. Joan Knocks Out Her Monster Of A Husband

In one of the show's most horrific scenes, Joan's picture-perfect husband rapes her. The good news is that she eventually kicks him to the curb, and inflicts a serious head injury while she's at it.

In the last episode before the mid-Season 7 break, Don hands the Burger Chef reins to Peggy. And she absolutely nails it. Just like we knew she would.

Harry Crane just keeps getting grosser and grosser. But when he propositions Megan early in Season 7b, she shows him that no one is that desperate for an acting career. Damn straight.

Don spends much of Season 1 gaslighting Betty and stripping her of her power. At the end of "Shoot," Betty steps onto her lawn with her son's BB gun and takes out the pigeons belonging to the neighbor who'd threatened to shoot the family dog. And this is the moment when Betty really starts to reclaim the power Don has stolen from her.

Trudy has incredible emotional endurance — she's married to Pete Campbell, after all. But once she finds out that he's flaunting his infidelity, she shuts the whole thing down with those four simple, yet effective words. Damn, girl.

7. Dawn Gets A Promotion

Not only is Dawn Chambers the first woman of color to work at Sterling Cooper Draper Pryce, she's also one of the few to climb the ladder. Nothing can match the look of pride on her face when she takes in the sight of her new office in "A Day's Work."

Once Peggy Olson becomes a boss at SC&P, she's not afraid to act like one. Modeling herself somewhat after Don, but not ignoring her own instincts, she has no problem managing her various underlings. It's inspiring, to say the absolutely least, and it's why we love her.

9. Don Dumps Faye Because She's Too Much Like Him

This one might seem a little backwards, but stay with me: Yes, it stings when Don chooses Megan over the brilliant and compatible Dr. Faye Miller. But he does it because she reminds him too much of himself — his career-obsessed, mega successful self. She's great at her job, capable, emotionally stunted, and pretty bad with kids — all things that women weren't "supposed to be." But she was all of those things anyway. And really, she dodged a bullet by "losing" Don.

"Be a woman. It's a powerful business when done correctly." I want to print this on a t-shirt and wear it every day until I die.

11. Joan's General Independence In All Matters

She may not always be right, but Joan dares people to judge her choices. She does what she feels she must. And even if it doesn't always work out for her, she does not allow herself to be pushed or swayed. That kind of independence makes her fierce, respected, and feared.

Of course, these don't represent every bit of feminist glory packed into Mad Men. But they are the ones that are really going to make me miss this show when it's gone.