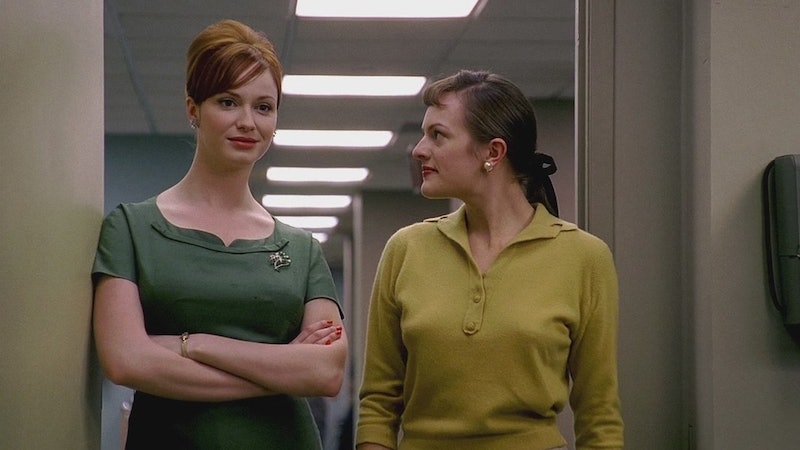 The final season of Mad Men started off with a whimper, but a few episodes in, and things at SC&P (that’s the ad agency at the center of the show, for the uninitiated) are getting C-R-A-Z-Y. A lot of that drama revolves around the rampant sexism faced by Peggy and Joan — two women who really could have benefitted from third wave feminism. Or second wave feminism. Or any feminism at all.

Things definitely aren’t perfect now (we’re still dealing with the wage gap, after all), but they’re a hell of a lot better than the Mad Men era of the 1960s. The looks, comments, and slights that Peggy and Joan have had to endure over the years are enough to make you want to scream. Earlier this season, after yet another meeting with some mind-bogglingly misogynistic ad execs, Joan told Peggy, “I want to burn this place down.” A lot of us probably had the same reaction to her anger, that reaction being, “Hell yes!” I kind of do hope Joan burns something down soon. The woman has been through enough.

And so, even though Peggy and Joan were (fictional) trailblazers in their day, they could have used the help of feminists like Gloria Steinem, bell hooks, and Audre Lorde. They had Simone de Beauvoir and Virginia Woolf and Betty Friedan’s The Feminine Mystique, and Joan actually mentions Friedan when she’s giving yet another sexist male exec a what-for, but there are plenty of books written in the last few decades that could have served as a rallying cry for the women of Mad Men when they needed it most, which was pretty much always. Here are a few.

Bolick’s new book makes a case for living life on your own terms, with or without a relationship. She preaches the gospel of solitude, and makes you feel OK for not making marriage and kids the number one priority. Peggy and Joan are kicking ass on their own, but they struggle with it, so Spinster probably would have made them feel a little less alone.

Sex and the City by Candace Bushnell

The women on Mad Men deal with enough crap all day, every day, so SATC would be a good, easy release for them after a long meeting where they’re told to just sit there and look pretty. The Manhattan of SATC is way different than the Manhattan of Mad Men, so they’d probably appreciate the fact that Samantha could sleep with whomever she pleased and brag about it, or Miranda is a kickass partner in a law firm. Plus, nearly every film, book, and article references SATC (hey now!), so it would help Peggy and Joan understand what the hell we're all talking about.

Lean In by Sheryl Sandberg

Peggy and Joan could probably write their own version of Lean In, but Sandberg’s manifesto about asking for what you want and getting what you deserve at work could have inspired Joan to not take 50 cents on the dollar when Roger told her to. And he thought he was doing her a favor!

We Should All Be Feminists by Chimamanda Ngozi Adichie

This TEDx talk turned essay is a 21st century rallying cry for feminists, and it would probably help Joan and Peggy realize that we’ve all been there, at some point, which sucks, but at least we’re in it together. It’s also funny at times, which always helps.

This one is funny most of the time, and Poehler’s honesty about relationships, divorce, raising kids, and being a working mom definitely would have brought some much needed levity to Joan and Peggy’s lives. The women scowl about 80 percent of the time, but then, so does most everyone on Mad Men.

Men Explain Things To Me by Rebecca Solnit

Rampant sexism is what makes Joan (and Peggy) want to burn everything to the ground, and Solnit’s essays about the awful power plays between men and women would definitely strike a nerve. They would for sure nod in recognition as they read it while sipping their vermouth, or whatever drink they find lying around the office.

How To Be a Woman by Caitlin Moran

In another place, and another time, Peggy could have been Caitlin Moran. She has that “I don’t give a damn” attitude (sometimes), and it’s plausible that she would write a book of bawdy, smart, hilarious essays about bikini waxes and childbirth. If only she weren’t stuck in the advertising world of the 1960s.

This might be a good intro to feminism for Peggy and Joan: You can wear heels and have a fancy hairdo and still be a feminist, which would probably be music to Joan’s ears.

The Female Eunuch by Germaine Greer

This one was published just after Mad Men’s final years take place, and it shocked the masses — which isn’t surprising when you consider the state of the world at the time. Greer’s call for sexual liberation as freedom was just what was needed at the time, and her rage would feel pretty familiar to Peggy and Joan. Greer wanted to burn everything down too, metaphorically.

This memoir about Kingston’s childhood as a Chinese American, and about coming into her own as a woman despite the obstacles and doubts thrown her way, is a great read for anyone needing a little dose of female empowerment.

Lorde’s essays and speeches will rile anyone up who is sick and tired of sexism, homophobia, classism, or racism. If Peggy and Joan had been able to read this one before meetings, they would have ruled the world. Or at least ruled the advertising world.

The Beauty Myth by Naomi Wolf

Joan’s red-haired beauty has been an asset and a curse, as many women understand all too well. It gets her in doors, and it gets her pissed off when she finds out those doors were opened because some jerk wanted to sleep with her, not take her seriously. The Beauty Myth is basically Joan’s story. Peggy could have used it, too, since she gets her fair share of gross, sexist comments. Evidently that was just life, back then.

The world of Mad Men might sound like a cesspool of sexist horrors, and it kind of is, but that’s one of the great things about the show. Peggy and Joan remind us how far we’ve come and how far we still have to go. And I for one am dying to know if they’re going to “burn this place down.” I really hope that happens.