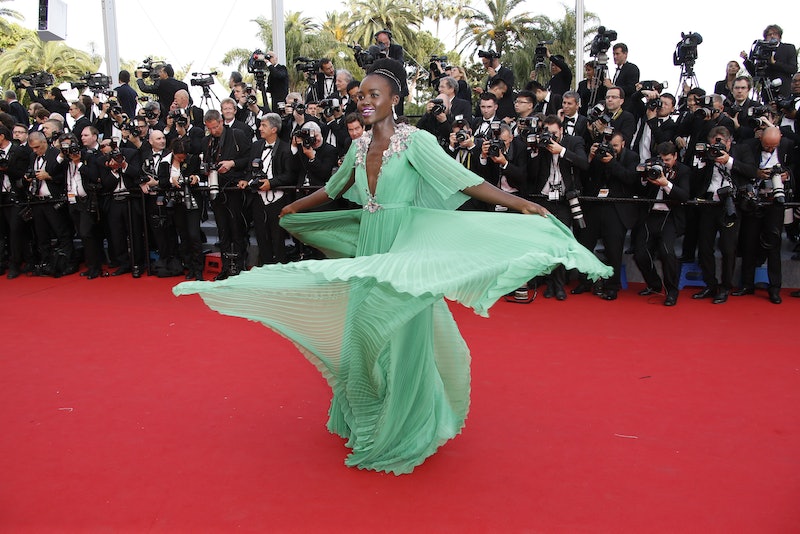 Ever since the beginning of her red carpet adventure, Lupita Nyong'o has been twirling her way through life. From the 2014 Oscars in her pale blue Prada to this year's Cannes Film Festival in a one-of-a-kind emerald Gucci gown, the star knows how to remain light hearted and have some fun through every formal occasion. What's the point of wearing a big, fancy dress if you're not going to spin around in it a bunch?

She even took some time off at the Cannes to do some sight seeing and twirl her way through France at this year's event. Floating through Eden Roc, she stepped out in a white cut-out top and white pleated midi-length skirt that was perfect for her signature spins. With the sea as her backdrop, the star looked stunning as she enjoyed her time abroad.

But she didn't just leave her spins by the sea. Nyong'o took to her Instagram to show off her signature pose as well. She captured her twirls in slow motion down a spiral staircase that made for one intense spiral journey.

With the caption "Never to late to twirl," she looked graceful as she floated down the stairs. Nyong'o hinted through her hashtags that it was the staircase that inspired her to twirl, but I can't help but think that she brought the inspiration with her to Cannes.

Kim Kardashian is best know for her selfies, but when she takes the red carpet, she's almost always rocked one arm on her hip. She brings a casual, cool vibe to any outfit by propping one arm on her also signature booty and making it look effortless. More recently Kardashian has swapped out her pose for an arm around Kanyé, but can still be seen donning her signature.

Megan Foxx's go-to on and off the red carpet is her signature pout. From her first Insta-worthy selfie to her time on the silver screen, everyone knows they can rely on her to bring those luscious lips alive. Whether she's been working on it for years or it just comes naturally, this is one trend that not just everyone can master.

Taking Kardashian's signature and added her own flair, Gaga had been rocking the double armed trend since she was just a new pop sensation. In the beginning of her diva days this was her go-to pose no matter the occasion. As she has evolved, she has found a few more signatures, but when looking closely you can still spot the star's original favorite.

A far way from her original peace signs, Miley Cyrus has shown many signatures in the past few years, but sticking her tongue out seems to be the one that's stuck. From red carpets to posing with friends, the singer shows that there's no where that her signature pose won't go.

Taylor Swift's style and singing has evolved over the years, but her on-stage pose looks like it's here to stay. Staying true to herself has never been an issue for Swift, and it looks like that rings true with her fun-loving, guitar playing power pose.

Leave it to Paris Hilton to be too cool to even look at us. Since her Simple Life days to her most recent international adventures, she has perfected the seemingly effortless pose. Normally seen in her huge sunnies, she makes her signature even more her own.

Although she's never one to be bashful, Lindsay Lohan has mastered the art of looking shy. With her hands almost always be her mouth in her poses, she has taken the bashful look and given it a personal twist. We've seen a lot of styles from this star, but her signature stays the same.