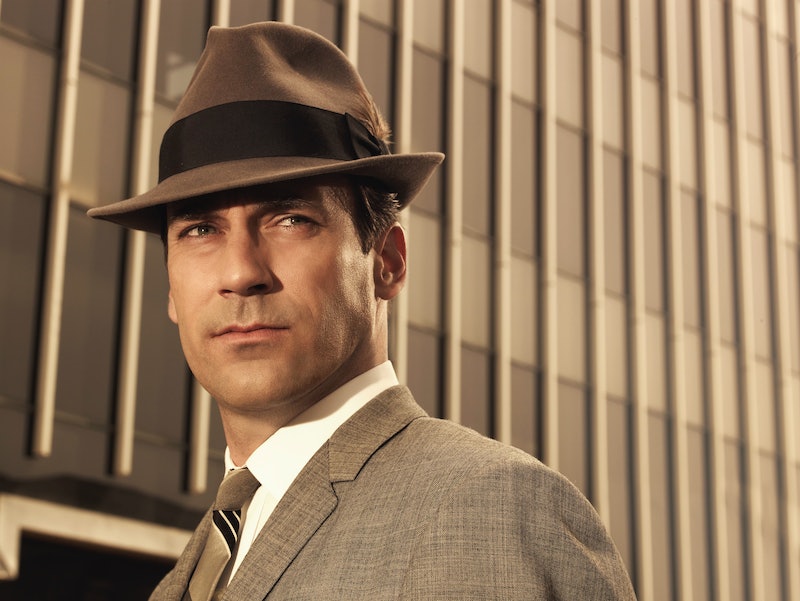 It's the end of an era: When Mad Men comes to an end after seven seasons Sunday night, television will officially lose one of its all-time great dramas. Meditative and psychological, every episode was a new journey into the psyches of Don Draper, Peggy Olsen, Roger Sterling, and the rest of the ad executives, lovers, and friends who passed through the series over the years. Mad Men is one of the few shows I can honestly say has taught me something about myself. I don't mean to sound all melancholy, but this goodbye is going to be hard. That is why I am looking back instead of forward — cue the Rachel Menken voiceover: "You only like the beginnings of things."

Each season of Mad Men was tonally different from the last. In Season 1, the '60s were just beginning, and everything was fresh/drenched in booze, by the time Season 2 rolled around, the times they were a-changin', as Peggy's career took off and Don became more reckless than usual. By the time the show entered its fifth season, it was embracing metaphors in a big way (remember Don's toothache of symbolism?). Just as each season said something new about the characters, your favorite season says something about you. So, let us all lift our glass to Don Draper, and delve into our own psyches — for old time's sake.

Somewhere, you have Don's pitch from "The Wheel" written down for safe keeping, because there is no feeling you feel more often than nostalgia. You feel it for your own past, and for a past you never lived. As the resident old soul of your group, you are often the person people turn to for advice, and you always have a Jack Kerouac quote at the ready. Maybe you feel things were simpler once upon a time, but if you truly think about the past you long for, you will realize life has always been a messy affair.

Season 2 was all about putting off the inevitable, and as an adverse soul, it hit a little too close to home. You loved it anyway, though, because you are more restless than you are willing to admit. In fact, some might describe you as volatile and passionate. Like Peggy, you work hard to follow Don's lead when it comes to mistakes ("It will shock you how much this never happened,") but you are too mature to not ultimately own up to your transgressions. Even though you hate conflict, you are strong enough to know it is a part of life.

As a person of action, Season 3 hit all of your favorite storytelling buttons. You thrive on change. If you aren't moving forward, then you wonder — what is the point? With a dark sense of humor and a deep appreciation for progress, you always excel in high intensity situations.

Don had a trying year during Season 4, and you can relate to his struggles. The darkest days of Mad Men remind you that there is always hope. You too have emerged from hard times and lived to tell the tale. You know the value of true friendships, and how important it is to hold on to them when times get tough.

You majored in English, didn't you? Season 5 of Mad Men is one of the most known in the show's history for its heavy metaphors. Those empty elevator shafts and ailing toothaches tickled your analytic mind though — and Don's identity crisis fed into your desire to dissect stories and find the deeper meaning hidden within. That is not just how you approach TV though, it is also how you approach life. In your eyes, everything is open to interpretation.

Sometimes in life, you have to tear everything down before you truly see who you are. Watching Don's slow descent and rebirth was a hugely cathartic experience for you. Either you have been there before yourself, or someone close to you has. Either way, you value the freedom of endless possibilities, no matter how scary uncertainty may seem to others.

You have reached a level of maturity most people only ever dream about. Life is never easy, and Mad Men was all about reflecting on life's real struggles. You know life is about the journey, and you are going to savor every crazy, wonderful, complex moment of it while you can.

More like this
Jesse Tyler Ferguson Had A Funny Run-In With A Fellow ‘Modern Family’ Alum
By Grace Wehniainen
“The Door Is Always Open” For Another 'Breaking Bad' Spin-Off, Says AMC Boss
By El Hunt
Everything To Know About 'The Undeclared War' Season 2
By Rachel Mantock
Everything You Need To Remember Before Westworld Season 4
By Brad Witter
Get Even More From Bustle — Sign Up For The Newsletter