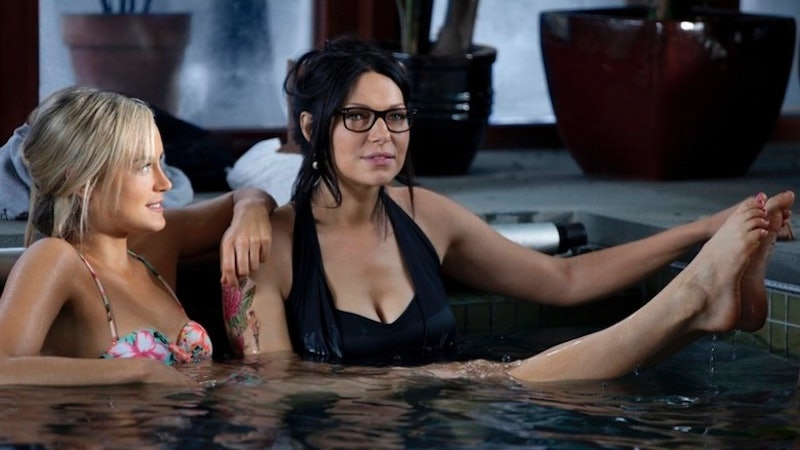 We at Bustle love giving you tips for how to tap into your sexual potential and troubleshoot when things aren’t going your way in the bedroom. But what about finding solutions to those stressful sexual health situations that inevitably crop up when you’re getting down? Emma Kaywin, a Brooklyn-based sexual health writer and activist, is here to calm your nerves and answer your questions. This week’s topic: the STD risks of having sex with women.

Q: People are always telling me that I’m lucky because lesbians can’t get sexually transmitted diseases, but I feel like that’s definitely not true. However, I’m kinda unclear about what I CAN get, and how I can get it. Like, how risky is oral sex (receiving and giving) without a dental dam? And what about if I finger someone and then end up touching myself later on while we’re having sex? Basically, what STDs am I at risk for when having sex with women, and how do I protect myself (and my lovers)?

A: Yes, contrary to popular belief, only getting down with other vagina owners doesn’t protect you from sexually transmitted infections (STIs). In fact, studies have shown that over one in four women who sleep with women will have at least one STI in their lives. Unfortunately, woman-to-woman transmission isn’t focused on much in studies (someone in the audience get on this, please!), so there’s still a ton we don’t know about the actual levels of risk for getting certain infections by doing certain sexy acts. For instance, research has found that women couples are more likely to both have bacterial vaginosis, but no one knows why that is. Luckily, we do know some things that can be transmitted through lady-on-lady activities, so let’s learn about it!

What Can I Get From Going Down On A Woman?

Your mouth is a very strong portal into your interior bits, and it's designed to vanquish all manner of unwanted bacteria and viruses that may enter. That being said, you can get some STIs in your mouth and throat from licking pussy.

You can get HPV through oral sex. This results in oral HPV — so basically, oral warts.

Since the herpes virus likes living in both oral and vaginal areas, it makes sense that if someone has it in one of those places, you can get it in the other. If you’re going down on someone who has HSV-1 or HSV-2, your mouth area can become infected with the virus.

Gonorrhea can live in your throat. You can get it here if the pussy you’re licking is infected and you happen to come into contact with infected vaginal fluid. Like its genital form, oral gonorrhea can be asymptomatic, but in those who have symptoms, it causes redness in the throat and can include white flecks and white or yellow discharge, similarly to strep throat.

If this sounds like you, don’t worry. Many people clear oral gonorrhea on their own, regardless of whether or not they have symptoms. If you start having a sore throat and test positive for oral gonorrhea, your doctor will give you antibiotics.

While oral sex is not a common way to transmit chlamydia, it has been known to happen, so it’s worth mentioning. If you get this infection in your throat, it will be painful to swallow, and you can get a cough and a fever.

Human immunodeficiency virus, or HIV, takes down your immune system, leaving your body vulnerable to all manner of outside infections. Oral sex is a low-risk, but not no-risk, activity for HIV transmission. Situations that can increase the potential to get HIV through giving oral sex include when the pussy you’re licking not only has HIV but also has sores on it (from herpes, for instance), or when it's on its period and you get menstrual fluid in your mouth. Also, if you have cuts or sores in your mouth, it’s easier for HIV to get into your bloodstream, which is where it lives and thrives.

Syphilis is a bacterial STI that can result in sores, either on the mouth or genitals. These sores contain pus, which can transmit the infection to either a mouth or vagina that comes into contact with them. So if the pussy you’re licking has syphilis sores, you can end up with the same in your mouth.

If you catch syphilis early, it’s easily treatable with penicillin. However, if left untreated, it can result in heart or brain damage and ultimately kill you.

What Can I Get From Getting My Pussy Licked?

Receiving oral sex is a low-risk activity for most STIs. However, there are some you can get if the mouth licking you is a carrier.

If the mouth licking you has HPV, it can be transferred to your pussy.

If the mouth licking you has oral herpes, that can transfer to your genital region.

If someone has thrush and gives you oral sex, they can give you a genital yeast infection.

Some STIs are transmitted through skin-to-skin contact. Luckily, only certain areas of skin can pass these viruses along, so don’t stop giving people hugs. But if you’re engaging in pussy-to-pussy contact, also known as tribadism, these are the things you should be considering.

HPV is the most common STI in the United States, so it would be discriminating if it left out ladies who like ladies. Some HPV strains cause genital warts, and a couple are known to cause cancer. You can get genital HPV through tiny cuts or abrasions in the top layer of your skin on or around your pussy or anus (which is why it’s in the STI category).

If you test positive for HPV, don’t freak out — chances are that your body will clear the infection. In fact, the average life of an HPV infection is between four and 20 months, and most people kick it within two years. However, if you do test positive for a strain of HPV that’s high-risk for cancer, it’s important to get routine pap smears so that you can make sure that you don’t develop cervical cancer.

Genital HSV gets transmitted when the mucus membrane (which is a type of skin) of one person touches the infected mucous membrane of another person. As we’ve already discussed, there are two kinds of herpes virus: HSV-1, which is mostly found around the mouth (although it can also thrive in the genital region), and HSV-2, which prefers the genitals. Herpes Simplex is super common: in the United States, about one in four women have HSV-2. It mostly hangs out dormant in the nerve cells near your spinal cord, during which time there are no symptoms. However, the virus periodically reactivates, traveling along your nerve fibers to the skin of the infected area to cause herpes blisters.

While there’s currently no cure for herpes, there are some things you can do to minimize transmission risk, such as taking suppressive medication and abstaining from sexual activity during visible blister outbreaks.

Chlamydia is not often found in women who have sex with women, but it can be transmitted through rubbing vulvas. Chlamydia is a bacterial infection that’s sexually transmitted. Most women don’t know they have it, but if you experience symptoms, they can include pain when you pee, pain in your lower abdomen area, increased vaginal discharge, and bleeding between your periods. Luckily, chlamydia is treatable with antibiotics.

Similar to chlamydia, gonorrhea is a bacterial infection that’s not all that common in lesbians but can be spread through tribadism. This STI is often asymptomatic, but in people who do have it, it can include pain in your pelvis and when you pee, increased vaginal discharge, and bleeding between periods. If this is you, talk to your doctor so you can get antibiotics. However, it’s important to know that some strains have become resistant, making treatment more difficult in certain cases.

Vaginal fluid contains HPV, so if you get someone else’s fluid inside you and it is infected, there’s a chance you could get it, too. A recent study found that HPV can be transmitted through sharing toys if they aren’t washed between partners.

HSV is not present in vaginal fluid. However, if there are blisters present in your partner’s vagina and some of the fluid in them gets on your fingers or toy that you then use on yourself, you can become infected.

Trichomoniasis is a parasitic STI that can cause vaginal itching and burning, in addition to not-nice-smelling discharge. It’s passed from human to human through direct contact with vaginal fluid. Luckily, it’s treatable with antibiotics.

Hepatitis is a class of viral infections that inflame your liver. Hepatitis A is transmitted through ingesting fecal matter that is contaminated by the virus or having sex with someone who has the virus. Hepatitis B and C are transmitted through vaginal fluid, semen, and blood. If you are playing with someone who has any of these three strains of Hepatitis and their vaginal fluid is conveyed into your body through fingers or toys, you could be at risk for Hepatitis yourself. You can get vaccinated against Hepatitis A and B, and while there’s no vaccination for Hepatitis C, new drugs have shown great promise in curing the infection.

HIV is transmitted through blood, vaginal fluid, and semen, which means that if you are sleeping with someone who is living with HIV and you get some of their vaginal juices in you, you could be at risk.

What Can I Get From Menstrual Fluid?

The main one to know about here is HIV, which has been shown to be transmittable through menstrual blood. Otherwise, there’s no research indicating that menstrual fluid contains STIs — however, it’s important to remember that, during sex, where there’s menstrual fluid, there’s probably vaginal fluid too.

What Can I Get From Female Ejaculate?

The composition of female ejaculate hasn’t been studied enough to know if it contains any STIs. This should come as no surprise if you’ve been paying attention to the news, since apparently, we’re still debating whether or not female ejaculation is even actually a thing. So here’s me calling on all you budding researchers to research this, because it’s super important to know!

So How Do I Protect Myself and My Sexual Partners?

Yikes, that was a lot! Luckily, there are some things you can do to improve your own sexual safety and that of the people you’re playing with.

The most important thing to remember whenever we’re talking about STIs is that you can’t get an STI from your lover if she doesn’t have it! Contrary to what some particularly spiteful people believe, infections aren’t born through queer sexual activity. So go with your sexual partners to get tested — that way, you’ll know if you even have anything to worry about potentially catching.

At the end of the day, the only way to 100 percent protect yourself from STIs is to not have sex. So since that’s probably not gonna happen (because sex is basically the most fun thing you can do with your body), get tested regularly, do what you can to protect yourself, and then relax and have a delicious time.