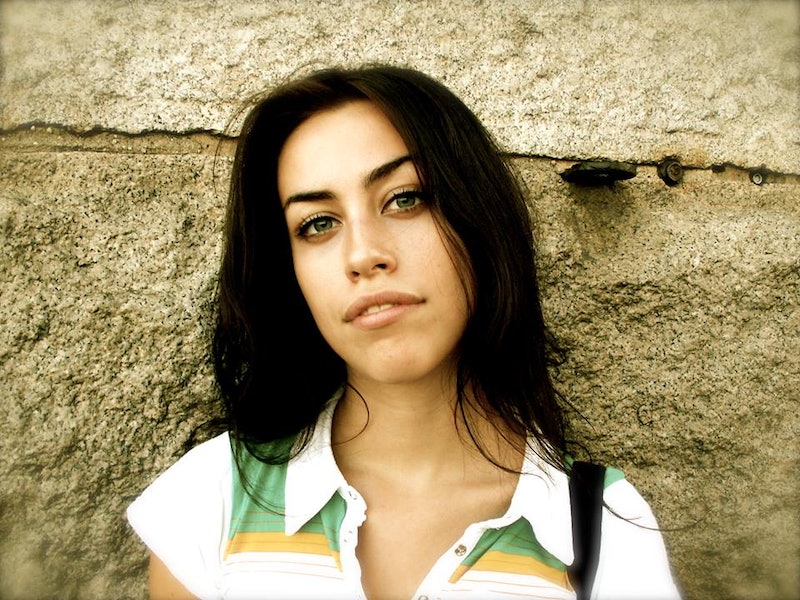 As a counter to the old-school, gender norm princesses we see splashed across Disney and pop culture, cartoonist Linnéa Johansson created the Super Strong Princess coloring book, an anti-princess princess activity for young girls and boys. (And hopefully grown adult women, too.) Taking 10 of her favorite characters from Disney films, she breaks them out of their traditional princess roles and helps them push for more.

I think the Witch and the Princess should be the same person, but for some reason they have been divided into two characters: one "good" and the other "evil." It automatically creates tension between the two, turning them into enemies and making it difficult for them to collaborate (female collaboration is a rare thing in Princess movies.)

She's right, of course. All of Ariel's friends were men; her enemy was the witch Ursula. All of Snow White's friends were men; her enemy was the magical Evil Queen. Even while Princess Aurora had Flora, Fauna, and Meriweather, her main enemy was an evil fairy, Maleficent. And Jasmine and Belle don't seem to have any friends, female or male, (unless you count Belle's companionship with the male housewares), though their main enemy are men, Jafar and Gaston. Bottom line: Where is the female collaboration? (Though don't worry, the Frozen caveat is coming.) Johanssen continues:

But looking closer at their aspects, the Witch is actually a much better role-model. She is defined by her personality and not by shallow factors such as age, beauty, or wealth. She is independent, experienced, knowledgeable, active, powerful, wild, untamed and magical. As opposed to the Princess who is defined by her beauty and youth. She is obedient, innocent, naive, gullible, passive, submissive, and has no access to magic. It all comes down to Prince Charming, who will marry the Princess and kill the Witch. The message is: Don't be a witch.

Because if you don't think Maleficent is independent, experienced, knowledgeable, active, powerful, wild, untamed, and magical (aka The Best) than you weren't watching Sleeping Beauty hard enough. As a counter, I'm not even sure I can remember if Aurora spoke more than two sentences and literally spent the third act asleep.

In creating Super Strong Princess, Johanssen empowered the princesses. Instead of focusing on their beauty, Johanssen imagined what it would look like to give them action and voice. In short, she says, she turned them into witches.

Snow White can be Happy, Grumpy, Sleepy, Sneezy, Bashful, Dopey, and Doc, the Prince, the Witch, and the Queen all at once. She can be everything. (Also LOL note to check out the KISS drawing.)

Whoa, whoa, whoa. I have met you for approximately five sections, and I'm currently asleep under a spell; it is not okay to kiss me, says this empowered Princess Aurora.

I can't believe I never saw how perfect Maleficent and the Evil Queen are for each other. Maleficent never has to feel left out of baby shower invitations again.

Her father was a crazy fun inventor. It was always sad that Belle gave up this influence, so shout-out to the Marie Curie book on her shelf.

Though Prince Eric is at the top in terms of the princes (second to Prince Phillip, who I like because my three fairy girls liked him), Ariel really needed to think through this whole being-a-human thing for more than, oh, three seconds.

Mulan, thankfully, is already a badass in her film, but it's nice to see her team up with Tiana and Jazz to crush it on the same team.

Whoa, Pocahontas and Esmeralda could totally be rock-solid pals.

Anna and Elsa in Frozen are the first notable instance of female collaboration as princesses and a princess that also has magical powers. Johanssen agrees:

I was pleasantly surprised to see the last Princess-movie, where for the first time ever, the main character (Elsa) has magical powers. She is a good Witch-Princess/Superhero, who collaborates with her sister and for once Prince Charming doesn't steal the show. I hope it will continue this way, because in my opinion a Queen is not something you become by marrying the King. Only by uniting the Princess and the Witch can she reach her full potential, become Queen and live happily ever after.

Projects like hers are definitely a step in the right direction. Although the Super Strong Princess coloring book is offered for free, she accepts PayPal donations via her email linneita@gmail.com.

More like this
Netflix Shut Down 'Bridgerton' S3 Rumours About A “Very Dark” Storyline
By Bustle
Here's How Netflix Should Adapt Prince Harry's Memoir Into A Movie
By Ginny Hogan
Kukulkan From 'Wakanda Forever' Has A Surprising Connection To Marvel History
By Grace Wehniainen
Michaela Coel Has Some *Thoughts* About The Nepo Baby Discourse
By Maxine Harrison
Get Even More From Bustle — Sign Up For The Newsletter
From hair trends to relationship advice, our daily newsletter has everything you need to sound like a person who’s on TikTok, even if you aren’t.